In this tutorial I’m going to explain an alternative approach that could improve your black and white film scanning. Using this approach has allowed me to improve the detail and sharpness of my film scanning. I hope it can help you do the same. If you haven’t already done so, I would recommend also reading my article “Advice for Better Film Scanning” which looks at optimising many aspects of the scanning process.

For a long time, I fought with my Epson V700. I thought the film scans produced we OK but soft. I tried all sorts of focus adjustment in the scanner. I also purchased glass film carrier to sharpen my scans, but nothing seemed to make the improvement I hoped for. Ultimately, I decided the Epson V700 wasn’t a very good scanner. As a result, I left a lot of film images languishing in my archives.

Recently I returned to try again, scanning some black and white negatives which I shot on my XPan. In the process I discovered a great trick to make the images sharper using my existing equipment and software.

Let’s start by looking at a scanned black and white image. I shot this using a Hasselblad XPan with 45mm lens which is a very sharp lens. The film I used was Kodak TMax400 B&W negative film. This should produce a sharp image with a fine but visible grain.

If you don’t already use VueScan it’s worth downloading the trial version from Hamrick Software.

Here you can see a magnified section of the scanned image at 100% magnification.

This image has no sharpening applied to it and provides a baseline for comparing other scans against.

The Key to Sharper Scanning

The key to what follows is being able to save the image as a DNG RAW file. Usually the recommended approach is to save images as TIFF files but the DNG format gives greater flexibility.

In VueScan you can set the output format in the “Output” tab. You can see a screenshot of the tab and setting below.

Once the scan is complete you can Open the DNG file using a RAW converter. Many RAW converters today support the DNG format but probably the safest option is using either Adobe Photoshop or Adobe Lightroom. Adobe Elements is also able to process the DNG RAW although it provides more limited adjustment.

Apply Capture Sharpening to Your Scan

Having opened the DNG file in the RAW editor, you can process it as you would any other RAW file. This should also include that application of capture sharpening which all RAW processing software is likely to support. 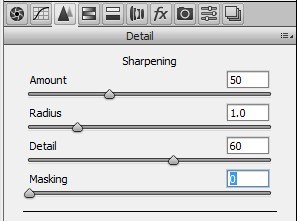 Here you can see the Sharpening settings being applied to the image. This produces a slightly sharper image which you can see below.

Apply Additional Grain to the Scan

The final trick to increase the sharpness still further is to add a fine grain to the image as part of the RAW conversion. The resulting image appears to snap into focus.

As the film already contains grain the new grain isn’t distinctive but can make the image appear much sharper. You will need to experiment with the amount, size and roughness of the grain but you will be able to see the effect your changes are having on the preview.

At this point, you probably thinking well the image will be sharper because you applied sharpening. This is true but try sharpening a film scan saved as a TIFF format and one using the method described in this article. You’ll find the image produced from the RAW file is most likely crisper and appears more detailed. That’s ignoring the benefit of greater control over the image correction provided in the RAW converter.

To put these small changes into perspective, the 100% magnifications you’re viewing are from an image that’s 53″ x 19″ when printed at 300dpi. That is a considerable print size.

In this article we’ve examined a simple workflow that can produce noticeably sharper scans from black and white negative film. But if you would really like to optimise your film scanning you should read my article “Advice for Better Film Scanning”.