Are Better Scanning Film Holders Really Worth it?

If you’re scanning film using a flatbed scanner you may have wondered how you can improve the results. One suggestion is by using the Better Scanning Film Holders. For this article I’ll be putting one of these film holders through its paces to see if it’s worth the additional cost.

For the testing I’ll be using my old Epson V700. I bought this scanner back in 2007 having read an online review saying it was better than a Nikon 5000 for 35mm film. I wish I could find that review to share, but it’s no longer online (I wonder why).

The truth is that this scanner falls short of what a dedicated film scanner can achieve. The images are slightly soft, it doesn’t have the same ability to recover shadow detail and it doesn’t have the claimed resolution. That’s why I purchased a Better Scanning film holder back in 2009 (or it could have been 2010), to improve my results. I also want to make it clear no one has approached me to make this review. I’m doing it because I’m interested in achieving the best scanning results possible.

The software I’ll be scanning with is SilverFast 8.8. It’s recognised as one of the best pieces of scanner software you can buy. It’s certainly better than the Epson Scan software in my experience, although I’ll save that for another article.

When scanning, I’ve turn off grain reduction and dust removal as they can have a softening effect. I have though left the Auto Sharpening option turned on. Given Auto Sharpening works based on the scanning resolution, the comparisons will still be valid, and it will help in judging the results (I think).

I shot the images I’ll be testing with a Hasselblad XPan which has excellent lenses. The images are sharp and relatively distortion free when viewed on a lightbox using a loupe.

You can use the Mounting station with all film formats from 35mm through Medium Format to 8×10 Large Format. To make a scan, attach the slide or negative to the underside of the glass using magic tape (don’t uses regular tape). During testing I’ve ensured the emulsion side of the film is facing down as this could cause variation in the results.

The idea behind the Better Scanning film holder is that it could improve scanning results in two ways:

Because the Better Scanning film holder is adjustable, and height is the method for focussing the V700 scanner, you need to calibrate the film holder before its first used. Whilst I’ve previously done this, I repeated the exercise prior to testing to ensure the adjustment was still accurate.

Given my comments above about the importance of height in focussing the scanner, I’ve also tested the different heights of the Epson film holder.

The Epson film holders allow you to change the height of the film holder using clip in shims. You can remove these to lower the holder, use them in the neutral position, or raise the holder by turning them to the + position. Whilst there was little difference between the three, the neutral position appeared to produce a slightly sharper image. I’ll therefore be using this setting for the testing.

Now you understand my approach, let’s look at the testing and some results.

For this test I’ve scanned a Fuji Velvia 50 slide taken with the XPan using a 90mm lens. The SilverFast software’s set for a single pass scan (no multiple exposures) at 1800ppi resolution. This is the often-quoted optical limits of the Epson V700 even though the scanner allows scanning at much higher resolution. The software is also set to save the resulting scans as a 16-bit TIFF files in the Adobe RGB colour space. If you printed this image at 300dpi, it would give a 5.5” x 15” print.

Here’s a section from central area of rocks, comparing scans made with the two film holders. 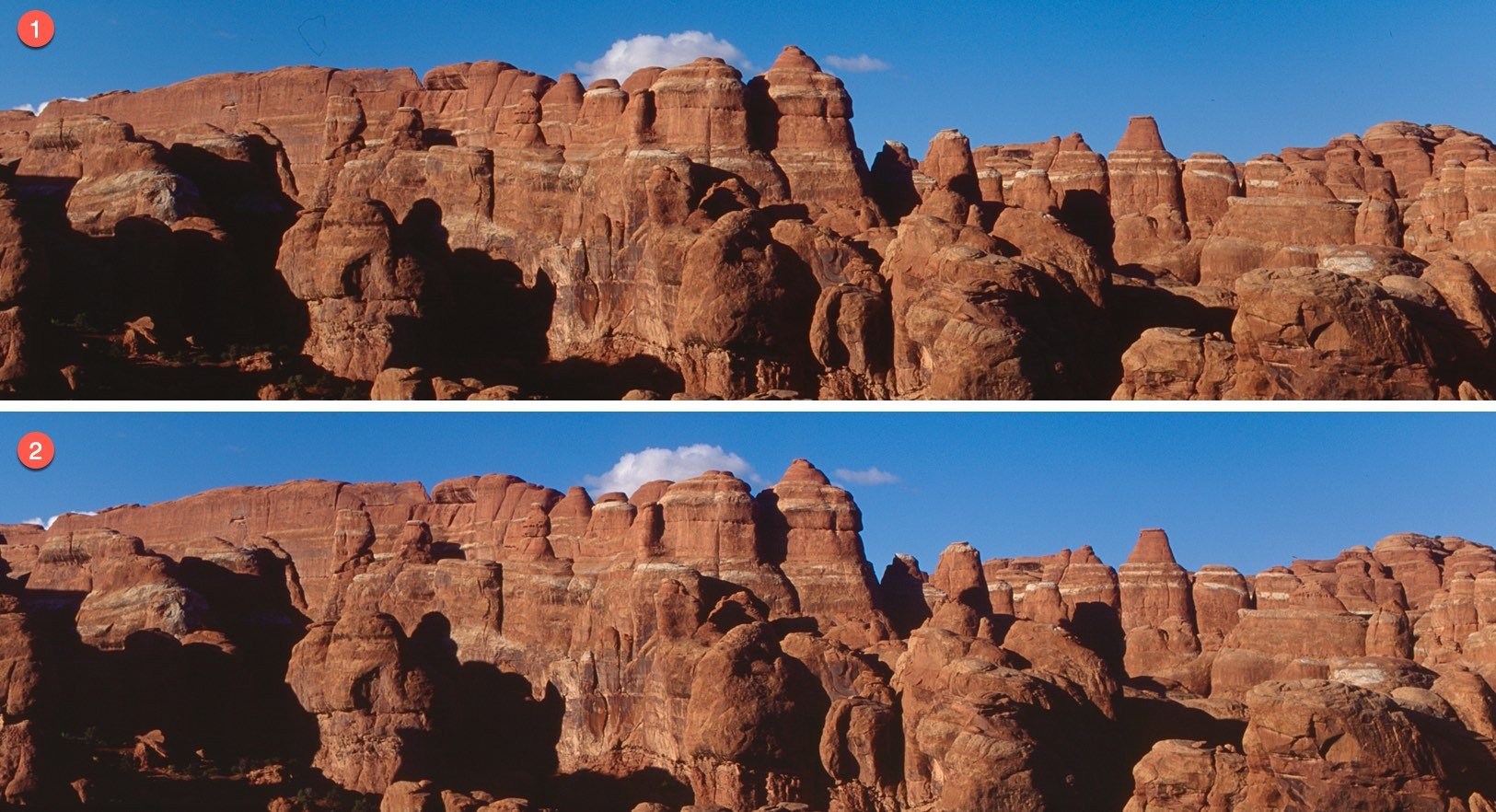 The two images show a section of the scan at 100% magnification. These are straight scans from the software with no adjustments at all. You can view full sized sections by clicking the image. Look closely to judge which image is sharpest, number 1 or number 2.

In this test, the Better Scanning film holder is image 1 and the Epson film holder is number 2. Comparing the two results I can’t see a difference. Even magnifying the image to 300% I couldn’t find any difference in sharpness.

Before making these scans, I was expecting to report a clear improvement when using the Better Scanning film holder but that’s not the case. In fact, at 1800ppi I can’t see any different when compared to the Epson V700 film holder.

Given my surprise that there was no difference between the two film holders, I decided to repeat the scanning but at a higher resolution. In this test I’ll be scanning the same slide at 4,800ppi. This is well beyond the commonly accepted  optical limits of the Epson V700 but within the manufacturers claimed resolution. If I printed this image at 300dpi, it would produce an image that’s approximately 15” x 40” in print. 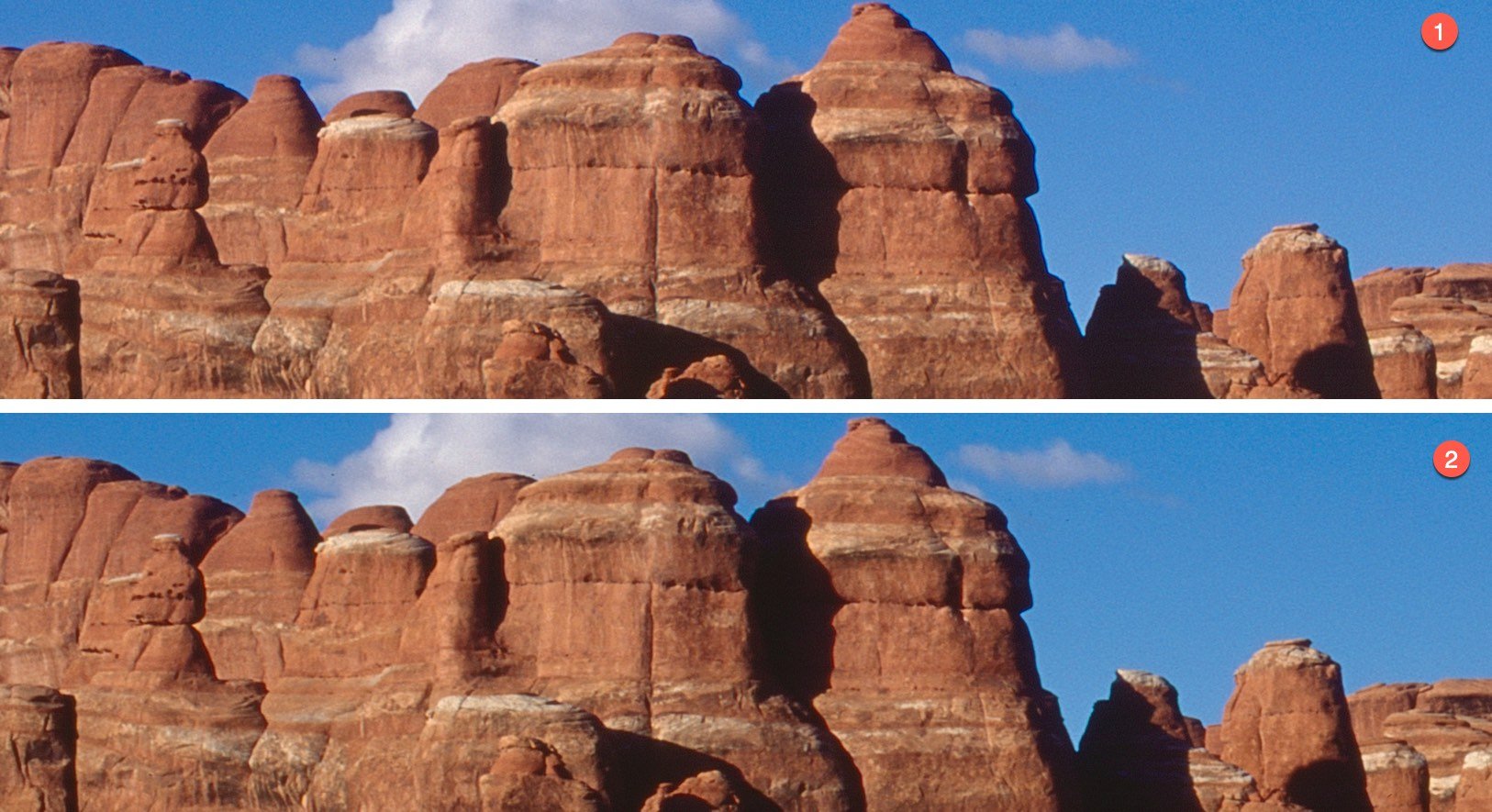 As before these sections are at 100% magnification and you can click the image to enlarge them. The Better Scanning Film holder is number 2 and the Epson film holder number 1. Viewing them side by side at 100%, 200% and 300% magnification, I couldn’t see any difference.

My conclusion from test 1 is that the Better Scanning holder didn’t make any improvement to the sharpness of my scans. Interestingly, even though the 4,800ppi scans are starting to show the limitation of the V700, both are quite sharp. I would happily make a large print from both scans.

This time I’m scanning Kodak TMax100 which is a very fine-grained film.

I shot this image using the XPan but with a 45mm lens. The subject matter may also make it easier to distinguish between the scan results. There’s a lot of fine detail in the image and we’ve removed distance from the equation. 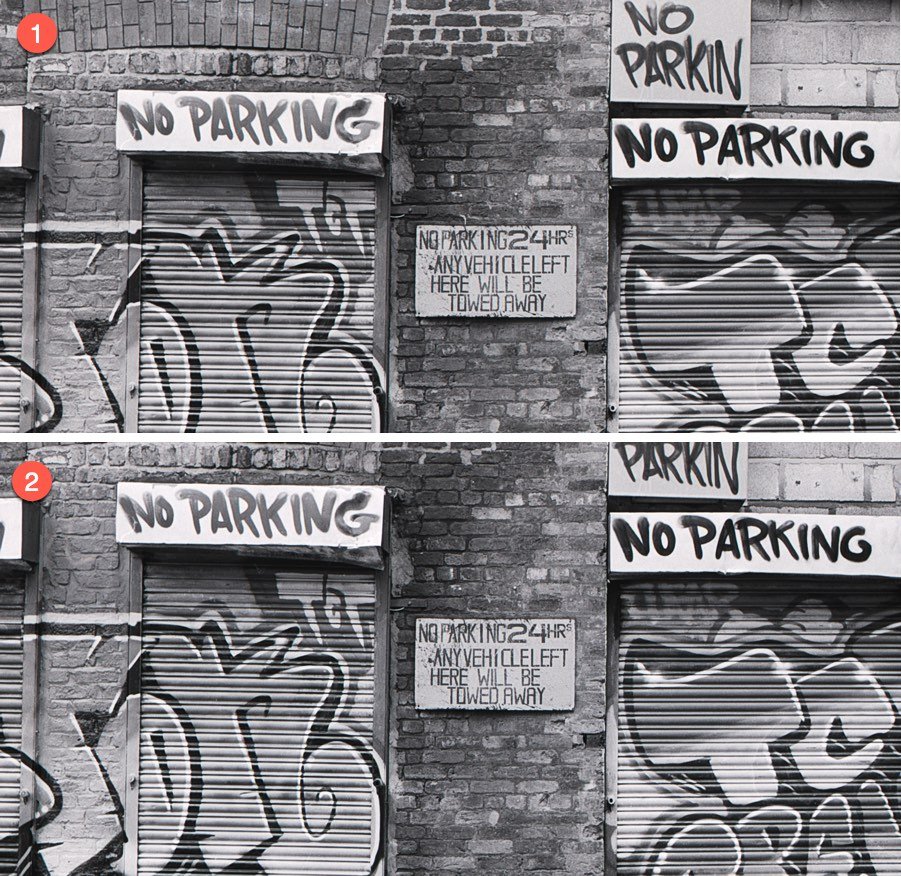 As before these are straight scans with no adjustment. Again, I can’t see any difference between the two scans when I compared them at 100%, 200% and 300%. Both appeared very sharp. If you’re comparing them, scan 1 is using the Better Scanning film holder.

The performance of the two holders is the same. I can’t see any improvement by using the Better Scanning film holder for my black and white scans.

Given this surprising result, I wondered if switching to scanning medium format would change thigs.

For this next test, we are using a Fuji Velvia 50 shot using a Pentax 67 with 55mm wide angle lens. 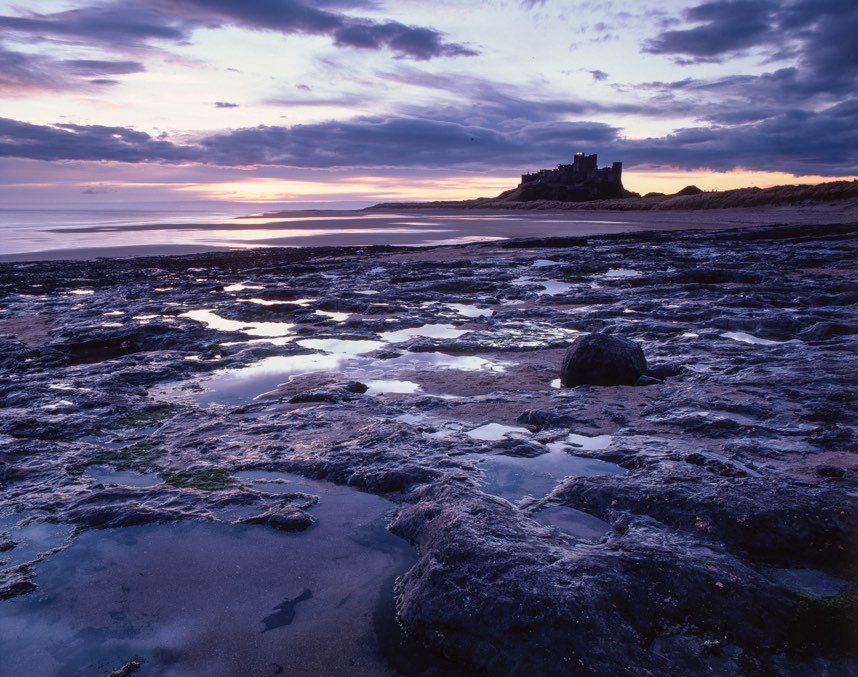 What follows is a side by side comparison of a section from the two scans, viewed at 100% magnification. 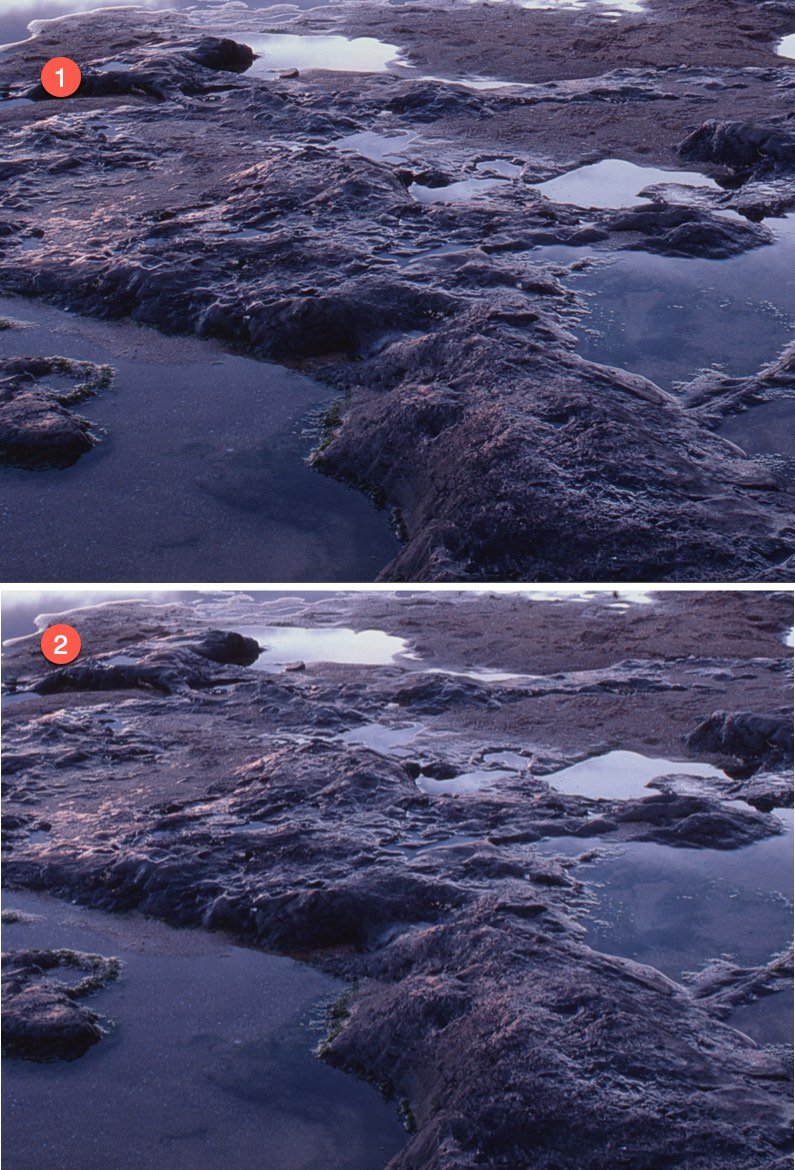 I also repeated the testing with the scanner set to 3,200ppi but there was no difference between the scans.

Conclusions of the Testing

Given my results, it’s easy to conclude that the Better Scanning film holder doesn’t improve scanning sharpness. If you’ve come to this conclusion, STOP!

These tests relate to my scanner and there can be quite some variation between scanner due to manufacturing tolerances. If there wasn’t this variation, Epson wouldn’t have gone to the trouble of creating a height adjustment for their holder. It’s quite possible the best focus height for your scanner is outside the film holders’ adjustment range. Testing and calibrating the height of your scanners film holder is an important step before deciding if a Better Scanner film holder is right for you.

In my testing I achieved the best results when my Epson holder was set to neutral. This is a scan height of 3mm and with the Epson holder I could adjust this 0.5mm either way. Even with the precision of the Better Scanning film holder I couldn’t improve on this performance. But if you test your holders and find the performance improving at either end of the adjustment range, it may be your optimum height is outside the range of the holder.

An additional factor to consider is the problem of film bend. If you find your scans have inexplicable soft areas, you may be suffering from the film bending or warping in the holder. Again, the Better Scanning film holder may be of value for you.

The conclusion I draw from my testing is that you should test the performance of your film holder and calibrate it carefully before investing in a Better Scanning film holder.