Today I want to look at the subject of noise reduction by reviewing Topaz DeNoise AI. The Topaz Website heading claims “Surprisingly good noise reduction with Topaz DeNoise AI” and I must admit that I agree. Over the period I’ve been using the software I’ve seen it turn unusable, noise shots into beautiful clean images I can submit to my stock library. But that’s not what I want to cover in this review. Instead, I want to discuss how to use the software and how practical it is to use in real world situations.

Topaz DeNoise was around for a long time before it became DeNoise AI. I can’t remember when it was launched but I recall using it at least 10 years ago. Back then, when you purchased a Topaz product you received free updates for life but that’s since changed as I’ll discuss shortly.

What I can remember when using DeNoise back then was that it was effective, but also that small adjustments often had a huge impact on the results. Consequently, I tended to only use it on my most noisy of images. It also required a lot of slider tweaking to achieve the best results.

More recently Topaz switched to AI processing for some of their products including DeNoise. Initially I was sceptical. I tried the beta version of the software; it was simple to use but also extremely slow processing. Worse still was that the results couldn’t compete with my other noise reduction tools.

After this poor experience I wrote off DeNoise AI and ignored my free upgrade until late 2019. I can’t recall what prompted it, but I downloaded my copy of the software to test it again. The results were superb, but we’ll get to that later.

As I mentioned, the original Topaz license model was that you purchased the product and received free updates for life. Over the years I’ve had enormous benefit from this, but I suspect it’s cost Topaz a lot in lost revenue. This model probably works well where there are lots of new users entering the market, but when photography is declining in popularity it will be a struggle.

In 2020 Topaz switched to a new license model. It’s a kind of cross between a subscription and perpetual license. You purchase the software which you can continue to use indefinitely, and you also receive 12 months of updates. After that if you want further updates you need to subscribe for another 12 months. You can even let the subscription lapse and then start a new one at a future date to catch up with new releases.

Although some may complain about this, I think it’s very fair and helps to fund an alternative developer to Adobe. I should also mention that Topaz Labs release regular software updates. There seems to be something new every couple of weeks almost, although not all of these are new features.

The only possible downside to the new model that I’ve noticed is that a year of updates is quite expensive if you only have a single product. If you own multiple Topaz products as I do the cost is much more competitive and I think good value.

You can use DeNoise AI as either a standalone tool or a plugin for the likes of Photoshop and Lightroom. Whilst the tools are the same for both, the standalone interface supports the batch processing of images. 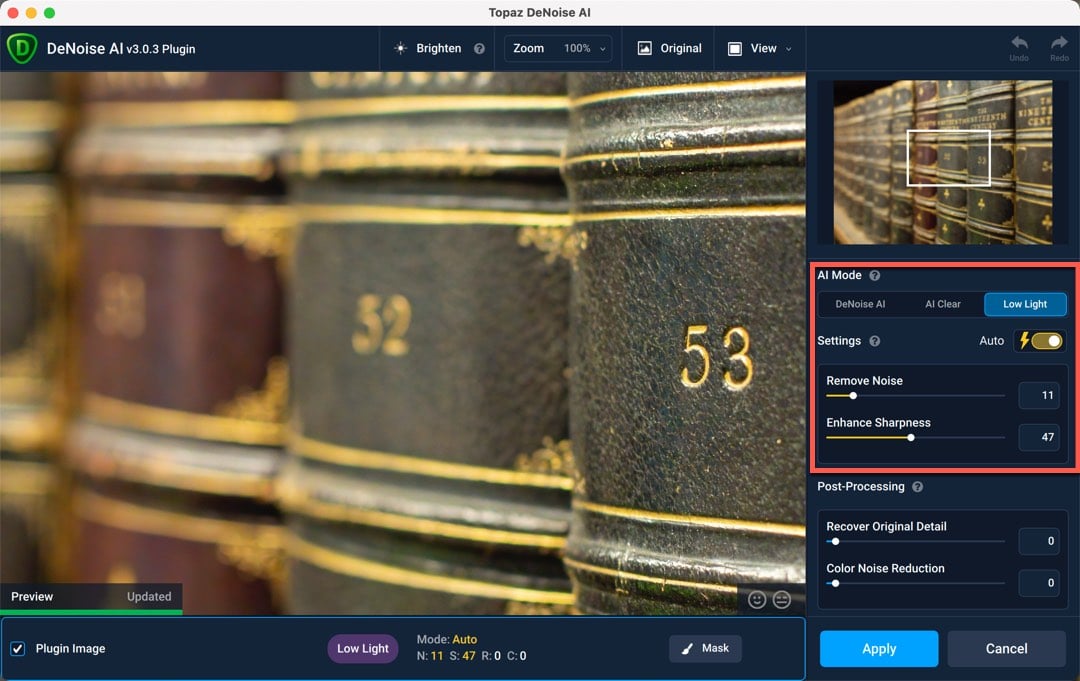 The main area shows a preview of the processed image with the adjustment settings down the right side.

It’s possible to switch the DeNoise preview between single image as shown, side by side and split screen using the “View” option in the toolbar at the top. Where the preview shows a single image, you can click the “Original” button to temporarily display the original image. This makes it easy to compare the noise reduction performance to adjust your settings.

Overall, the interface is clean and well laid out, making it easy to use. It feels like a well-polished product.

The DeNoise AI settings are selected from the options on the right side of the interface. Here you can pick one of three “AI Modes” being:

The first two are general noise reduction modes but the Low Light mode is intended for low light conditions where you might need stronger noise reduction and weaker sharpening. Despite these differences, I’ve found it best to check all three with most images. There’s usually one or possible two modes that perform best and it’s not always the mode you expect.

With the three different AI Modes the only changes you need to make are to the noise reduction and sharpening levels. To make this even easier there is an “Auto” switch. When turned on Topaz DeNoise determines the best settings to use. Initially I was sceptical of this feature, but I’ve since found it works well almost all the time. The only decision you really need to make is which of the three modes to use as the results can vary a lot.

Finally, there are the Post-Processing controls which provide additional adjustments. These are “Recover Original Detail” and “Colour Noise Reduction” which are pretty self-explanatory. Most of the time you can leave these set to 0 which has no effect. You only need to use them when you find the best AI Mode doesn’t produce quite what you had hoped for.

For example, you might find AI Clear gives the best results but is a little too smooth. You could then use the “Recover Original Detail” slider to recover some of the lost fine detail. Alternatively, perhaps it’s the DeNoise AI option that’s best but you can still see traces of colour noise in the results. You could then correct this using the “Colour Noise Reduction” slider.

A recent addition to Topaz DeNoise AI is the mask feature. 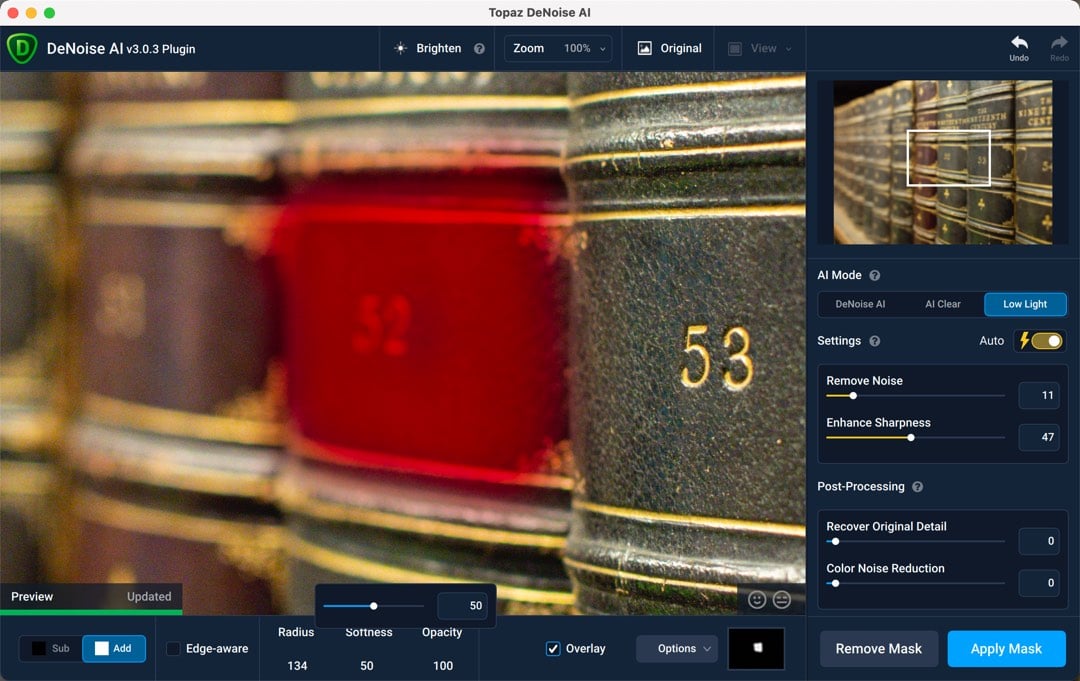 Use the mask option to either remove the noise reduction from an area or limit where it’s applied. You can do this by painting on the image using the masking brush. This includes several options to help you make the selection like being able to invert the mask and clear it. There’s also an Edge-Aware option to help with precision masking, although I haven’t found this enormously easy to use well.

Whilst the ability to create masks to control the noise reduction appears useful, I personally find it to be of limited value. Usually, the global noise reduction and sharpening applied by the different AI modes works for most situations and is all that’s needed. It’s also a lot quicker than spending time painting masks.

One option that you might find more useful is the Batch Processing mode in Topaz DeNoise AI. 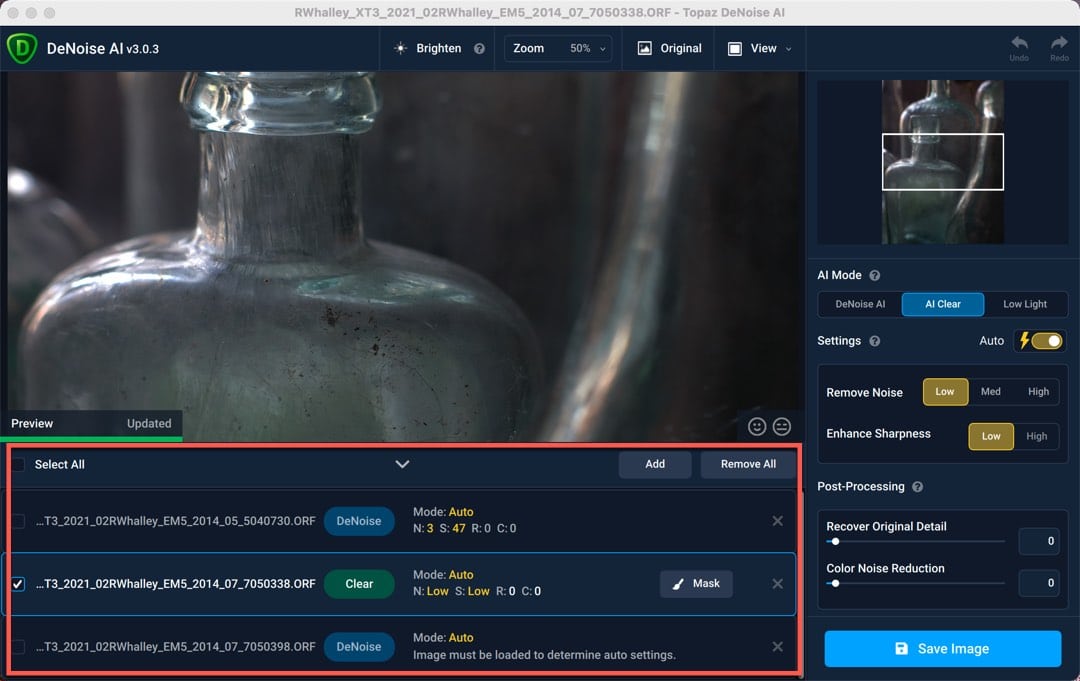 When you use Topaz DeNoise AI in the standalone mode, you can easy process images in batches. When you add multiple image files, you will see them listed below the image preview. You can then select each image to pick the best individual settings to use. Once you have chosen the settings for all the images you can process multiple files using the Save Images option.

Something else that’s possible when using Topaz DeNoise AI standalone is that you can process RAW files without first converting the image to a TIFF or JPEG file. Although the Topaz processing of RAW files isn’t perfect, the results are still very credible. You also have the option to output the processed image file as a DNG file which you can then edit further in a RAW converter. This makes Topaz DeNoise AI extremely flexible in terms of when and how you use it.

So far, we’ve concentrated on the various features of Topaz DeNoise AI, but haven’t really discussed performance in terms of processing speed and the quality of results.

Speed wise, the software is reasonably quick to update the image preview providing you don’t make the preview too large on a high-resolution screen. Additionally, you may want to consider keeping the zoom level high and in the region of 100%. When you try to display the entire image as a preview changes to setting will become painfully slow to update the preview.

When it comes to processing and saving, DeNoise AI is reasonably fast, especially when you consider the processing involved. Having tested the software against the excellent DxO DeepPRIME noise reduction, the two are on a par. For a 20Mpixel micro 43 RAW file processing is around 10-15 seconds on my Mac.

It’s difficult to find a suitable word to sum up the quality of the results from Topaz DeNoise AI. Words like “incredible” and “amazing” have become overused these days, but I can’t think of any better . Since returning to use Topaz DeNoise in 2019 it’s become an integral part of my workflow for stock photography. Most converted RAW files that I process in Photoshop now have a layer added where I apply DeNoise AI. This is then converted for Smart Filter which I can use with the Nik Collection.

Although my existing RAW converters usually do a good job of noise reduction, I’ve found the Nik Collection can sometimes exaggerate noise. Applying them to a layer which has first had DeNoise applied significantly reduces this and enhances the quality of the finished image. I’ve now found myself able to submit images shot at ISO1600 on old micro 43 cameras for stock without problem where they would previously have been rejected. In fact, if you didn’t look at the image metadata you would never guess they weren’t shot at the camera base ISO.

In conclusion, Topaz DeNoise is the best noise reduction software I have used in terms of workflow flexibility, speed of processing and quality of finished image. It’s also exceptionally easy to use and now forms an integral part of my processing where I’m trying to achieve the best quality. The only time I find myself wondering if I need to use it or not is if I’m also using Topaz Gigapixel (read my Gigapixel review) to enlarge the image or Topaz Sharpen AI to fix issues with softness. Both products also include noise reduction and sharpening tools.

The best advice I can give is to try the DeNoise AI demo from the Topaz website. Seeing is believing.