A little while back I experienced my first DxO Performance Problem. It followed a minor upgrade to the software (I can’t remember which one) but it was a serious problem. So serious in fact that it crippled the software and I couldn’t it. Fortunately, it was easy to correct by changing one of the settings in PhotoLab.

To give some idea of the performance problem I was experiencing, let me explain what happened when I launched PhotoLab.

Before the performance problem, PhotoLab launched within about 20 seconds. After installing the upgrade PhotoLab was taking around 5 minutes before I could start my editing.

When I selected an image to edit, the image could take 1-2 minutes to open in the editing module. But even when the image was open its was almost impossible to make any adjustments because the PhotoLab performance was so poor. Clearly something had changed in the DxO PhotoLab update and was causing this performance problem.

Initially I tried searching Google and then searching the DxO forums for performance problems, but I couldn’t find anything. Then I had a breakthrough.

I decided to launch PhotoLab on its own and watch carefully what was happening. That’s when I noticed my photo storage drive was constantly updating even though I wasn’t using the PhotoLab software. This updating continued for a couple of hours before finally stopping. After that I found I could use PhotoLab for editing and the performance problem had gone. That was until I switched to another folder of images which caused the storage drive activity to start again.

This helped me realise that PhotoLab must be doing something in the background. When I checked the image folder PhotoLab was browsing I found lots of new dop files. These are the files that DxO uses to save any image adjustments you make. This helped me realise that PhotoLab must have been applying adjustments to every image in the folder and this could be causing the performance problem.

Now all I needed to find out was why and the most obvious candidate was the PhotoLab Preferences.

Opening the preferences, I checked through the tabs for any setting that might cause PhotoLab to automatically apply an adjustment to an image. That’s when I found an option in the General preferences to apply a Preset to newly discovered RAW and RGB files automatically. This was the cause of the problem and changing the setting to “No Correction” fixed my performance issue.

I didn’t share this initially because I thought it was probably something that I had changed. It was only when someone left a comment on another of my PhotoLab articles, complaining about PhotoLab’s poor performance, that I remembered this. I suggested checking and updating the General Preferences and it fixed their performance problem. That’s why I’ve now decided to share my fix. 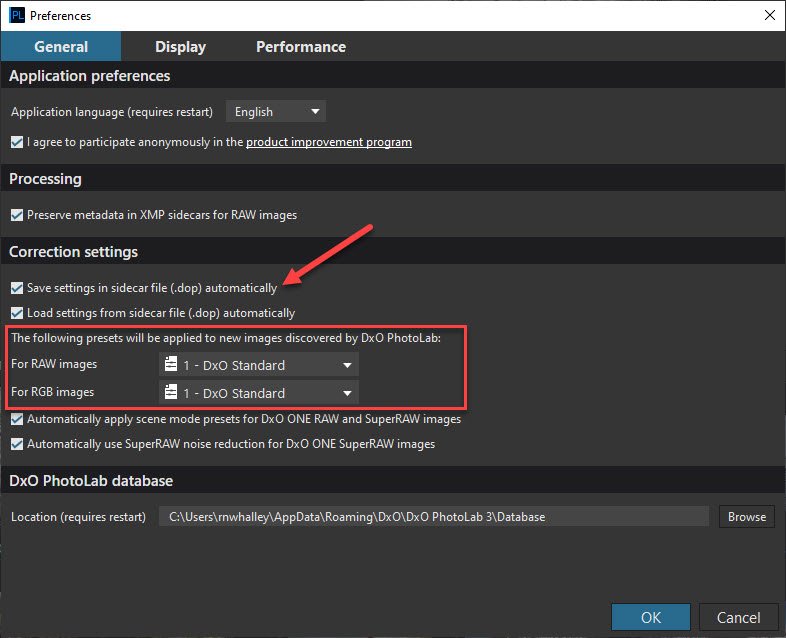 In the General tab, change the two dropdown lists to “No Correction” and click the OK button.

This screenshot also shows the setting to automatically save corrections as dop files. It’s this setting that caused my storage drive to fill with PhotoLab dop files. Each time PhotoLab discovered a new image it would apply an adjustment present. This setting then caused PhotoLab to write that adjustment to a dop file on the storage disk.

Once you’ve made the change, restart PhotoLab to fix the performance problem.

If you’re using DxO PhotoLab on a Mac, start by launching the software.

In the General preferences tab, change the “Presets” dropdown to “No Correction”.

But I Don’t Have a Performance Issue

It’s quite possible you’re reading this thinking you don’t have a performance problem even though your PhotoLab Preferences have this setting. There are a few possible reasons for this:

Even if PhotoLab isn’t causing a performance problem for you, it’s worth checking your image folders. If they are full of PhotoLab dop files that you haven’t created by editing images, you might want to consider changing your preferences.

Clearly the DxO Performance problem may not cause everyone an issue. But if it’s affecting you it can be extremely frustrating. And if you’re a new DxO PhotoLab user it could even cause you to give up on the software.

Fortunately fixing the performance problem is a simple change to the PhotoLab Preferences.

If you or anyone you know is affected by the performance problem, please share this article.