I recently received an email from Topaz Labs to let me know that Gigapixel AI 5 had launched and as an existing Topaz Gigapixel user I had free upgrade to the latest version. Given how impressed I was when I tested Gigapixel AI 4 I was keen to see what improvements Topaz had made in this latest version.

After launching Topaz Gigapixel AI 5 I could see a new tutorial options on the right of the interface. 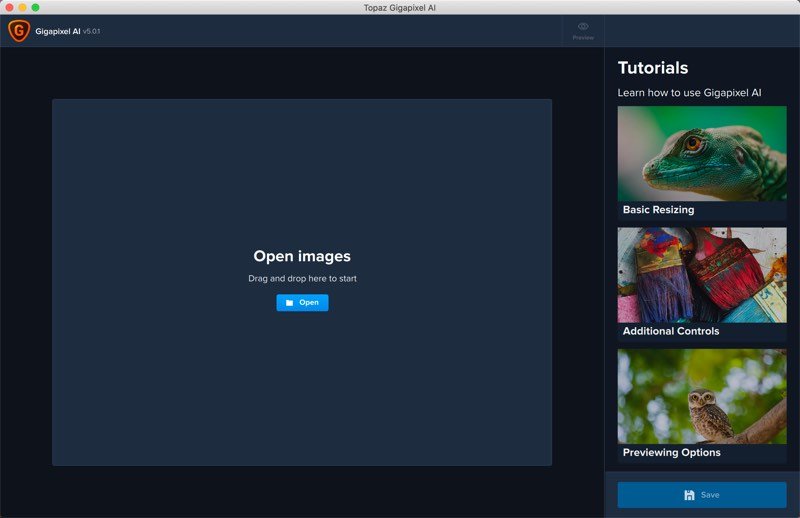 Clicking one of these images opens a useful tutorial that I can step through in the main window. 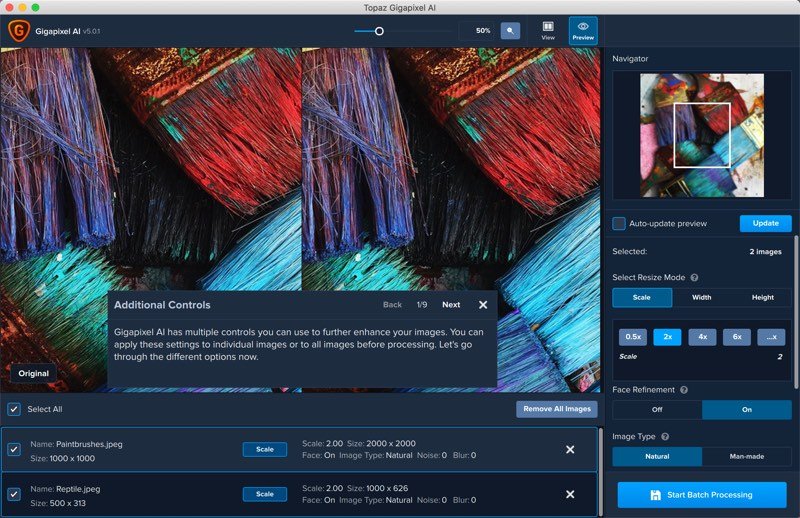 There’s some valuable information in here, but I’m not sure they are necessary. Gigapixel is extremely user friendly and easy to use. In fact, the most difficult thing is probably selecting the size and resolution of the enlarged image. After that you can pick the automatic options and it will create a great enlargement.

There are though a couple of special features to handle the enlargement of images with facial recognition. This was also in the previous version of Gigapixel. But there’s also a new “Image Type” option.

The big news in Topaz Gigapixel AI 5 is the special enhancement for images of man-made objects.

Topaz Labs has realised that there is a large difference between natural subjects such as landscapes and those include man-made objects. They therefore tuned their routines to handle these two types of enlargement. All you need to do is pick the type of subject that you’re enlarging, being either natural or man-made.

Whilst experimenting with the latest version and with the preview zoomed to 100%, I could see the difference.

Whilst the settings for “Suppress Noise” and “Remove Blur” don’t change, the results are quite different. With the Man-made option selected, edges become clearer and appear more heavily sharpened. When I switch to the Natural image type, the edges are slightly soft but fine grain or noise in the image seems to be better preserved.

Processing performance appears to be on a par with the old Gigapixel AI version 4. Again, this is a subjective judgement and I can’t present any timings.

But the big question is, are the results better? For natural subjects I would say no, they are on a par with the previous version but for manmade subjects the improvement is noticeable.

The only possible problem to be aware of when using topaz Gigapixel AI is that your image needs to be clean from noise and artefacts. I’ve heard some people criticise topaz Gigapixel for introducing artefacts. Whilst it’s true that I have seen artefacts in my enlarged images, on closer investigation Gigapixel was not the culprit. In every case so far, I found some form of artefacts in the original image. All that Gigapixel has done is enlarge these and made them more obvious.

It’s therefore important to clean your image properly before enlarging and not to over sharpen before enlarging. If anything, you may want to try applying less sharpening.

If you’re looking for good noise reduction software to help with cleaning the image, I’d highly recommend Topaz DeNoise AI. Whilst I haven’t reviewed this software to yet, I have been using it quite a lot recently and I am extremely impressed with the results.

Overall, I’m extremely impressed with this release of Topaz Gigapixel AI 5. The software is going from strength to strength. and I’m interested to see what Topaz does next. If you haven’t done so already, I would recommend downloading the trial version of Topaz Gigapixel AI. The results may surprise you.