In this tutorial we look at how you can use Photoshop Plugins in Affinity Photo. I’ll explain:

We also look at some of the common problems you might encounter and how you to avoid them by initially reviewing your Photoshop plugins.

If after following this tutorial and watching the accompanying video you still have problems, please share them on the Affinity Photo Forums. I’m unable to troubleshoot individual support requests or respond to requests because of the number of emails I receive.

You will find any correctly installed plugins in the Affinity Photo Persona under the Filters menu. At the bottom of the menu is the Plugins submenu where the plugins are listed.

When you read the Affinity Photo help documentation it says Affinity can access 64-bit Photoshop compatible plugins. Whilst this is true, not all Photoshop plugins will work with Affinity, and before you can even access them you will probably need to configure Affinity Photo.

Where to Install Plugins to Affinity Photo

This displays the Preferences dialog where you will need to select the Photoshop Plugins option. 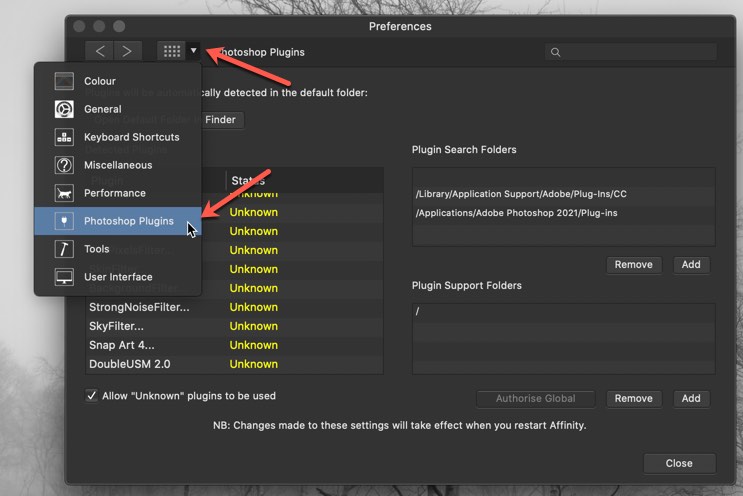 When you open the Affinity Photo Preferences dialog you could face one nine different screens depending on how they were last used. The main screen shows a series of icons where you will find an icon for “Photoshop Plugins”. If you’re in one of the other screens, click the dropdown menu list at the top of the dialog and select Photoshop Plugins from the list.

After opening the Photoshop Plugins Preferences, you will see a dialog like this. 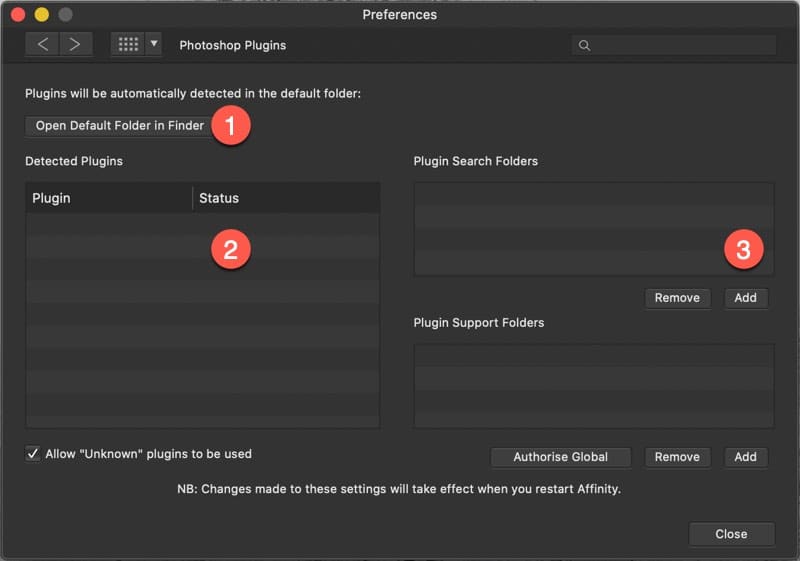 This is the Mac version of the Preferences dialog; the Windows PC version looks slightly different. That’s because there’s an extra step you need to complete when using a Mac. The three numbered elements of the dialog that are common to both Mac and Windows but are arranged slightly differently.

To find the default location for Affinity Photo Plugins, click the “Open Default Folder in Finder” button (number 1). This opens a Finder dialog on a Mac or the File Explorer in Windows showing the plugin folder location. This will probably be empty as most people don’t have any plugins installed there. When you do install plugins to this location, Affinity Photo detects when it starts up and displays them as a list (number 2).

If your Photoshop Plugins are installed elsewhere (usually in Photoshop folders) or you can’t/don’t want to install them to this location, you will need to configure Affinity to find them.

Before Affinity Photo can detect existing Photoshop Plugins you will need to add their location to the Preferences. You can do this using the Add button (number 3) to include the folder location in the Plugin Search Folders list. Affinity then scans these folders in addition to the default folder when it starts up.

But before you try to add any folders to the search list you need to know where your Photoshop Plugins are installed. This was relatively simple, but then Adobe changed the structure of Photoshop in Photoshop 2019, changing the location for Plugins, Presets and some other saved assets. (I should mention that they had a good reason for this, and it wasn’t an attempt to frustrate users.)

This is also confusing because plugins in the application folders are left behind when the Photoshop application is removed or upgraded. This could mean that you also have old versions of plugins installed to your computer that perhaps you weren’t even aware of.

As you can imagine, the situation with Photoshop Plugins has become a little messy. And because you can have multiple versions of a plugin installed to your computer, if you point Affinity at all of them it quickly becomes a bewildering mess. I therefore recommend you spend a little time exploring the various folders to locate all Photoshop plugins before configuring Affinity Photo.

Photoshop Plugins on a Mac

If you’re using a Mac, there are two locations to check for the Photoshop plugins on its hard drive:

In the Applications folder you can find current and old Adobe Photoshop installations. 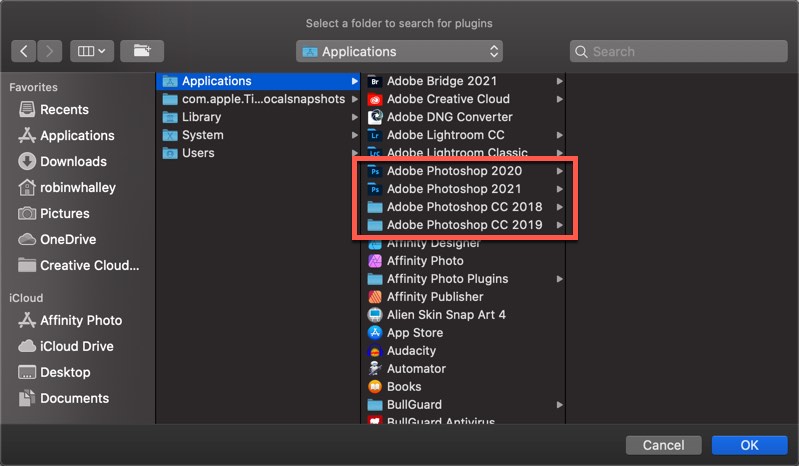 On this Mac there are four sets of Adobe Photoshop folders created by different versions of Photoshop. Currently only Photoshop 2020 and 2021 are installed but there are still old folders for 2018 and 2019. If we check the 2018 folder, we find there is a Plugins folder containing plugins that were installed to that version of Photoshop. 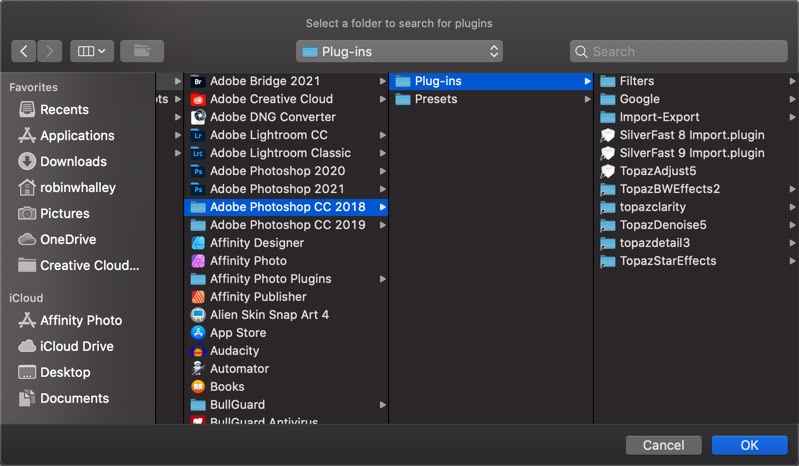 These Plugins and Presets folders were left behind when the 2018 version of Photoshop was removed. Old folders like this will remain on your computer until you delete them. If we then check the Plugins folder you will see it holds a Google folder. This contains the old version of the Google Nik Collection plugins despite my having installed the latest DxO version of Nik.

If you have plugins installed for Photoshop 2019 or later, they are probably not in the Applications folder but in the Library folder.

Now you may have noticed I’ve used the word “probably” when saying where to find your plugins. If you watch the video at the end of this tutorial you will see an example of a plugin that doesn’t follow this approach.

Photoshop Plugins on a Windows PC

On a Windows PC, the situation with Photoshop Plugins is like that of the Mac. You first need to know where Windows is installed on your hard drive as that will contain the “Program Files” directory. This is most commonly on the C: drive of your computer.

In the “Program Files” folder, you will find a folder for “Adobe” and in the “Adobe”, folder are the Photoshop folders. In the screenshot above you can see two Adobe Photoshop folders, one for 2018 and the other 2019. In each of these is a “Plug-Ins” folder where Photoshop plugins can be found.

The same “rules” apply to these as to the Mac folders discussed earlier. In the 2018 version of Photoshop the plugins were installed to this folder but in 2019 they were moved to a Common Files folder. Despite this you may still find some plugins still use this location.

The 32-bit version of Photoshop and it’s plugins are installed under C:\Program Files (x86) but it’s unlikely these will be compatible with Affinity Photo.

Whilst both Windows and Mac users should now see plugins in the Plugins menu, there is still an additional step for Mac users. You can see why in the plugin list of the Affinity Photo Preferences.

In the Detected Plugins list there is a list of your Photoshop Plugins with a status next to each. As you scroll down the list you may see some with the words “Requires Global Support” next to them. This tells you that the plugin needs access to additional resources in another location on the Mac hard drive.

We can grant this by clicking the “Authorise Global” button. This again opens a Mac Finder, and we can select the root of the Mac hard drive. This is where the Application and Library folders are held. 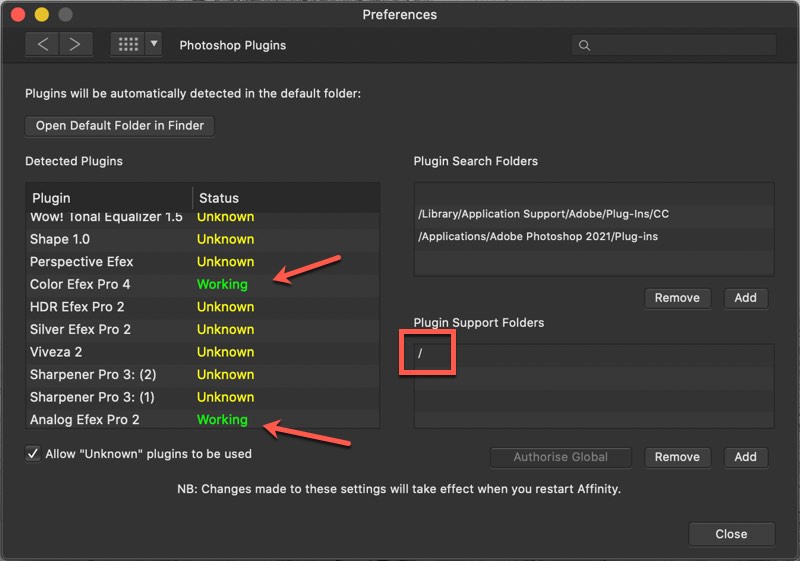 After adding the Global Authorisation, you will see the folder path in the in the “Plugin Support Folders” list. You should also see the plugins in the list change to “Working”.

After making these changes you are ready to test out all your Photoshop plugins to see which will work in Affinity Photo. Be aware that some may crash Affinity Photo, in which case restart Affinity and test the next plugin in the list. You might also see some odd behaviour with plugins like On1 which initially appear not to work but then work the second time they are used. If you want to know more watch the video below.

To pull this tutorial together and help you make sense of using Photoshop plugins in Affinity Photo, I’ve published a short YouTube video.

Get Affinity Photo How To

We’ve covered a lot of ground in this tutorial, some of which is quite technical. Despite this, if you take your time you should be able to get Affinity Photo to detect your Photoshop Plugins.