If you’ve ever tried to photograph a tall building you’ve probably run into problems like converging verticals. This is where buildings appear to lean backwards in a photograph as the “vertical” sides of the building converge inwards. Tilting your camera to get the building in frame causes the effect and it’s further exaggerated by wide angle lenses. In the past, you needed a camera or lens with perspective controls to correct this but now you can do everything in software. In this tutorial and video, we look at how to fix architectural distortion using the Lightroom Transform tools.

In this video, I demonstrate how to use the controls in the Lightroom Transform panel. We look at how to correct converging verticals and other misalignment problems.

A common problem people encounter when trying to correct perspective problems with Lightroom is to confuse the Transform tools with Lens Corrections. This is entirely understandable as the Lens Correction panel did house the perspective controls at one time. If you’re using an older version of Lightroom and can’t see a Transform panel in the Develop module, please see my earlier Correcting Converging Verticals in Lightroom tutorial.

In the current version of Lightroom CC, you’ll find the tools you need to correct perspective distortions like converging verticals in the Transform panel. You can see a screenshot of the panel below. 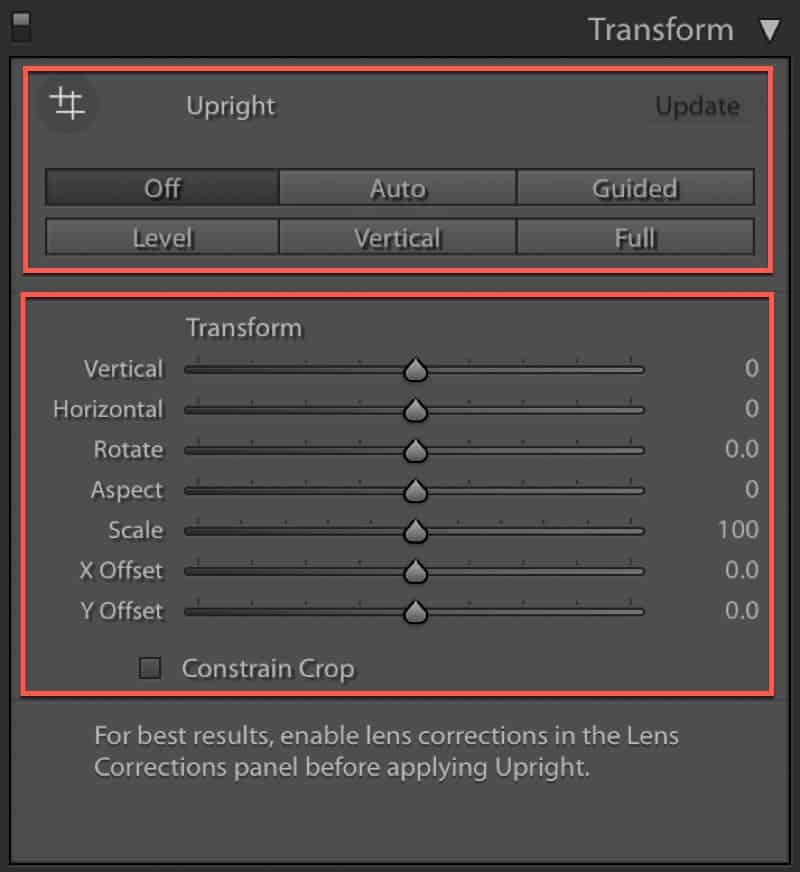 It’s best to think of the controls in the Lightroom Transform panel as being in two groups. The top group allow you to apply an initial adjustment to correct problems. Typically, this will be to level a slanted horizon or fix verticals that don’t appear vertical. You then have the transform sliders in the second group which offer additional adjustments. The important part of that sentence is the word additional.

It’s best to start using the first group of tools and then apply any further corrections to refine your image. Whilst it’s tempting to use the Auto button, and this sometimes works, there is a better option. If you’re dealing with correcting architecture, the Guided tool is probably the most flexible and very easy to use.

Click the Guided option and you’re able to draw four guidelines onto your image. Typically, you will want to draw two vertical guides and two horizontal guides. You can see a screenshot of this below. 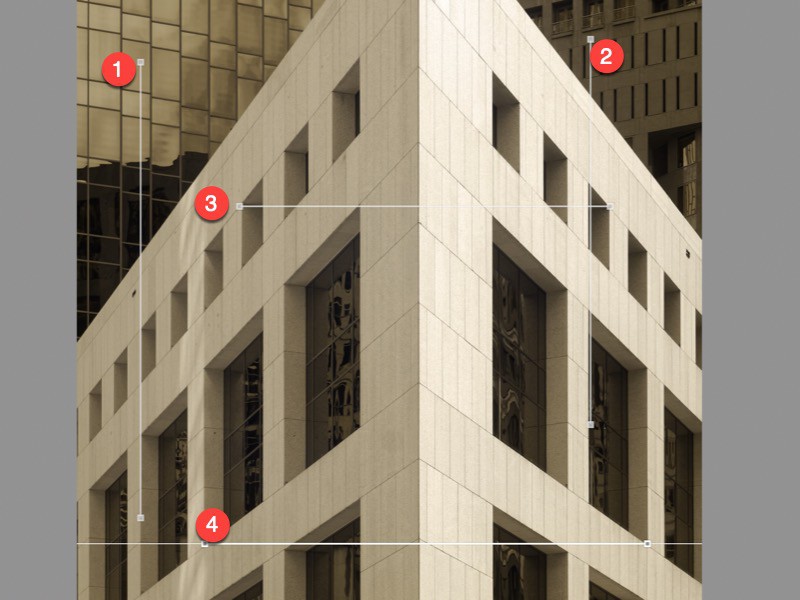 You draw the guide by clicking and dragging with your mouse. Try to position each guide to follow a line in the image. If you don’t quite get it right first time you can click the points on the guides and drag to reposition them.

Once you have two guides in place you should see the image redrawn to make the lines vertical or horizontal. It’s possible to correct some significant distortion using all four guides. The results if done carefully can be surprisingly good.

You should find that you correct most of the distortion once you have your four transform guides in place. That’s when you can apply additional adjustments using the transform slider controls.

The Vertical slider tilts the image around an imaginary horizontal point in the centre of the image. It’s probably best used to correct converging verticals. If you’ve done a good job drawing your guides you probably won’t need to use it.

The Horizontal slider tilts the image around an imaginary vertical line running down the centre of the image. Again, if you’ve drawn the guides well you can probably ignore this.

Rotate will rotate the image around it’s centre point and used to level the image. The guide lines should also have corrected this.

The Aspect slider is very useful because it corrects a problem your corrections may have caused. When you correct converging verticals in an image the image usually becomes distorted, making it appear long and thin. You can use this slider to fix that problem. For example, move the slider to the left and the image expands out left and right. At the same time, it’s squashed inward from the top and bottom.

The Scale slider will shrink or enlarge the image. You can then reposition it using the X and Y Offset sliders.

It’s these last four sliders that you will probably find most useful once you’ve aligned your image using the guides. With this approach you should be able to correct quite significant distortions.

The Lightroom Transform controls are remarkably good at correcting perspective distortions like Converging Verticals. It does take a little practice, but you will soon be achieving good results. If you haven’t already done so, I do recommend you watch the video earlier in this tutorial. It demonstrates both the Guided adjustment and the Transform controls, showing just how effective they can be.

Get my book "Lessons for Landscape Photographers" FREE when you sign up for my monthly newsletter. Lenscraft in Focus, the newsletter that's genuinely helpful.

All comments are manually moderated before display

Photo Editing Tutorials Fix Converging Verticals with Lightroom Transform
Lenscraft uses cookies to ensure that we give you the best experience on our website. If you continue to use this site we will assume that you are happy with this. OkRead more