How to Open Images Using Camera Raw in Photoshop

If time’s short and you need to open an image using Camera Raw in Photoshop, the following steps will help. If you want to understand more detail, skip this, and move to the next section.

An alternative to step 3 is to use the keyboard shortcut in Photoshop. Pressing Shift + Cmd + A (on a Mac) or  Shift + Ctrl + A (on a PC) opens Adobe Camera Raw for editing using the selected image layer in Photoshop.

Whilst it’s simple to open Camera Raw in Photoshop, there’s much more you can do as this tutorial explains.

What is Adobe Camera Raw?

You may already be aware that Raw files aren’t image, but rather the stored data from a digital camera sensor. Converting this data into an image requires a process called Demosaicing, which is the job of a RAW converter. In the case of Photoshop, the RAW converter is Adobe Camera Raw.

Of course, RAW converters have developed significantly over time and now do so much more than demosaic the RAW file. Most now offer advanced editing feature and tools which you can use to apply adjustments to the RAW data in the conversion process. And it isn’t just RAW files they work with; you can also use these tools to adjust and edit image files like TIFF’s and JPEG’s.

As mentioned previously, Photoshop  uses Adobe Camera Raw to process any RAW files before you can edit the image. This is why, when you open a RAW file using the “File | Open” option in the Photoshop menu, you’ll find Camera Raw launches automatically.

But what if you’re working on a regular image like a JPEG or TIFF file. We’ve already said that Camera RAW can edit these image files. How can you launch Camera RAW to edit those? Fortunately, Photoshop introduced a way to do this quite a few years ago.

For this process to work you need to have a pixel layer selected in the Photoshop Layer Window. The filter won’t have any effect if open an Adjustment Layer like a Curve or Levels adjustment.

The way to ensure you work on a pixel layer is to create what’s called a “Stamp Layer”. You can do this by clicking the top layer in the Layers Window to select it. Then press Shift + Option + Cmd + E (Mac) on your keyboard. If you’re using a Windows PC press Shift + Ctrl + Alt + E. This creates a new pixel layer above your selected layer. The new layer consolidates all the other visible layers in the image called a Stamp Layer. 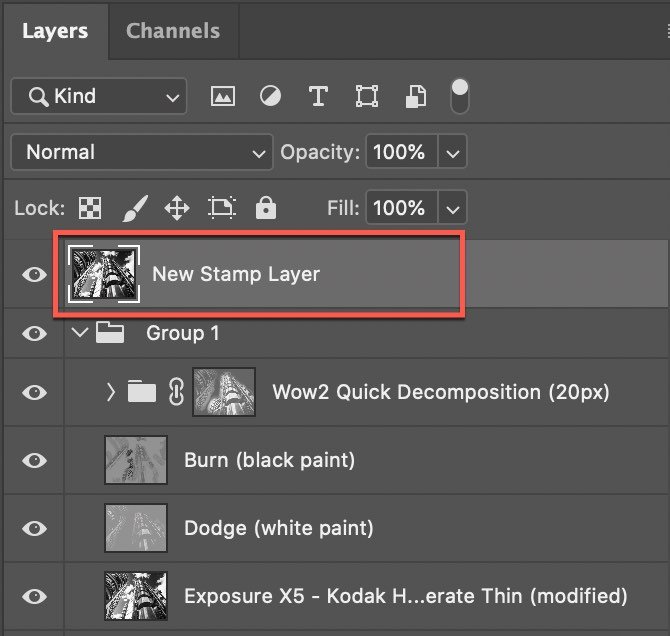 With the new pixel layer selected use “Filter | Camera Raw Filter…” from the Photoshop menu. You’ll find it near to the top of the menu. When you select this option, you’ll see Adobe Camera Raw open, displaying your image for editing. 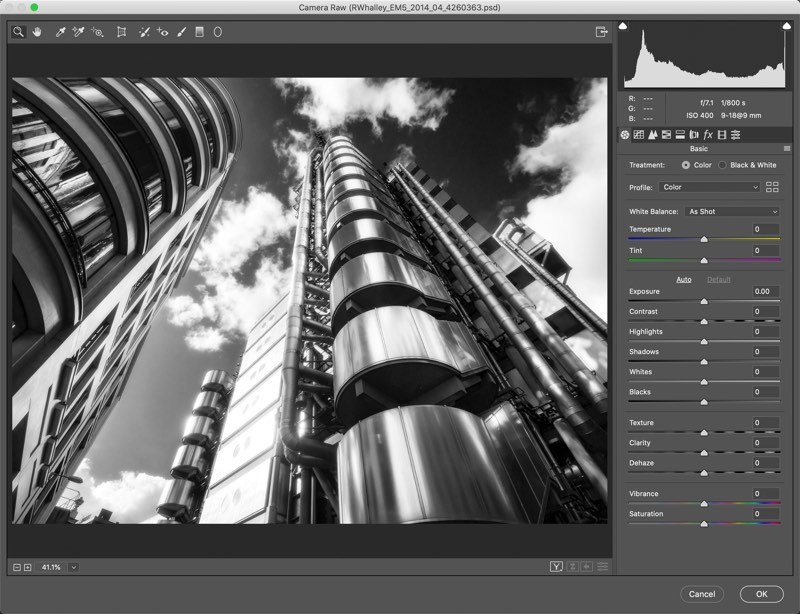 You can now apply any adjustments to the image, after which click the OK button.

When you click OK, the Camera RAW filter applies your changes directly to the image layer you created.

Although this ability to open any image directly in Camera RAW from Photoshop is useful, it has a limitation. When you apply your changes to a pixel layer, you are making the adjustments directly to that layer, permanently changing it. For example, you increase the contrast to +20 in Camera Raw and apply this to the layer. Now when you open the layer a second time in Camera Raw, you’ll find the Contrast adjustment is back at 0.

The way to overcome this problem is using something Photoshop calls a Smart Object. It’s also one of the reasons I recommend creating a new pixel Stamp Layer to use with the Camera RAW filter.

Start by creating and selecting a new Stamp Layer (as described previously) in the Photoshop Layers Window.

We now need to convert the new layer to use Smart Filters. We do this by selecting “Filter | Convert for Smart Filter” in the Photoshop menu. Photoshop may then display an information dialog depending on your settings. After you confirm the conversion, and following a small delay, nothing appears to happen.

But if you look closely at your layer in the Layers Window and you’ll see a small icon to the bottom right of the thumbnail.

This icon shows the layer can now use Smart Filters.

Applying the Camera Raw filter to a Smart Object

Having converted the layer to use Smart Filters, you can launch the Camera Raw filter as you did before from the menu. An alternative to using the Photoshop menu is to use a keyboard shortcut. By pressing Shift + Cmd + A (on a Mac) or  Shift + Ctrl + A (on a PC) on your keyboard you open the image in Adobe Camera Raw.

After making your adjustment, click the OK button to apply your changes to the layer. Now when you look in the Layers Window you can see the Camera Raw filter listed as a Smart Filter. 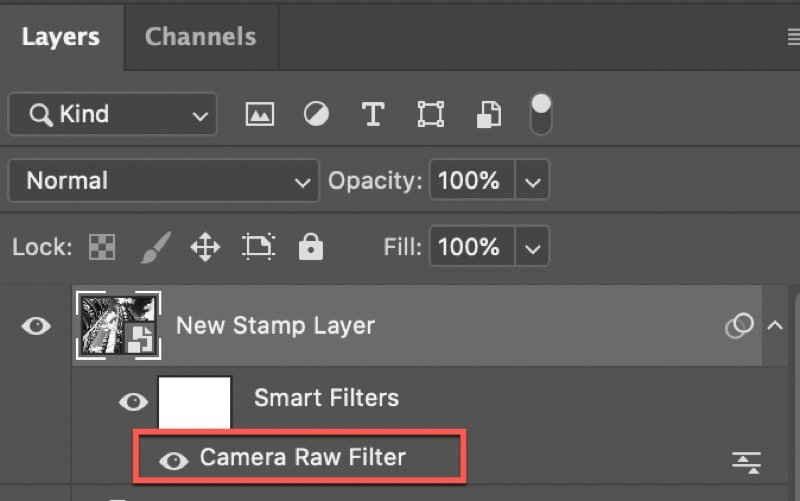 If you want to reopen the Camera Raw filter, you double click the entry (the red outline in the screenshot) in the layers window. This reopens the filter and you will see your previous adjustments which you can change further.

Providing your save your finished image in a Photoshop file format (like PSD) you will be able to open and adjust the Camera Raw filter at any time in the future. It doesn’t matter that you may have previously closed Photoshop or even shut down and restarted your computer. The Smart Filter retains your adjustments.

You can learn more about working with Adobe Camera Raw and Photoshop in my book “Essential Adobe Photoshop CC”.