The Most Powerful Adjustments in Nik Silver Efex Pro

Nik Silver Efex Pro is a powerful black and white converter in the Nik Collection. It helps you to easily achieve adjustments that could leave you scratching your head in Photoshop. And in Lightroom similar adjustments might not even be possible. Two of the adjustment sliders in Silver Efex Pro that are very difficult to replicate are Soft Contrast and Dynamic Brightness. In this tutorial, I’m going to show you how to use these sliders when converting photos to black and white.

You can also watch this video on my YouTube channel. I publish new videos regularly, often based on subscribers’ requests and feedback. Subscribe to my YouTube channel now and be sure not to miss future videos.

When you want to understand what effect a slider is having on your image, don’t watch the image, look at the histogram. By watching the histogram as you move a slider, you can understand its effect on the image.

Here’s an example of what happens to the histogram in Silver Efex Pro when we move the Contrast slider to the left.

Now compare this with the effect of moving the Soft Contrast slider to the left.

At first glance, the histogram appears similar to the Contrast adjustment slider. But look closely and you see the effect on the histogram has been less severe. We can also see there are a few tones remaining in the black and white regions of the histogram.

The difference becomes obvious when you examine the adjusted images.

How Should I use the Soft Contrast Slider?

In the video at the end of this tutorial, you will see the effect of the Soft Contrast explained in greater detail. The video also explains the Dynamic Brightness slider, before demonstrating how to use these two powerful sliders in your Nik Silver Efex Pro workflow.

There are three groups of controls in the Global Adjustment section of Silver Efex Pro. These are Brightness, Contrast and Structure. 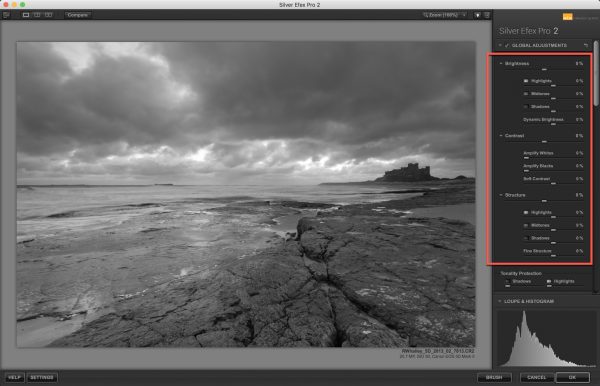 Unless the exposure of the image you’re converting is completely off, start by adjusting the Contrast controls. And if your exposure is completely wrong, you should go back to the RAW conversion stage and correct it there. The adjustment sliders in Nik Silver Efex Pro should be used to refine and improve the black and white conversion. They are not for correcting image problems.

Once we have done this we may need to open the shadows a little if they have become too dark, by using the Amplify Whites slider. We can use the other similar slider (Amplify Blacks) to darken the lighter tones in the image. You can see the result of using all three of these Silver Efex sliders in the screenshot below. 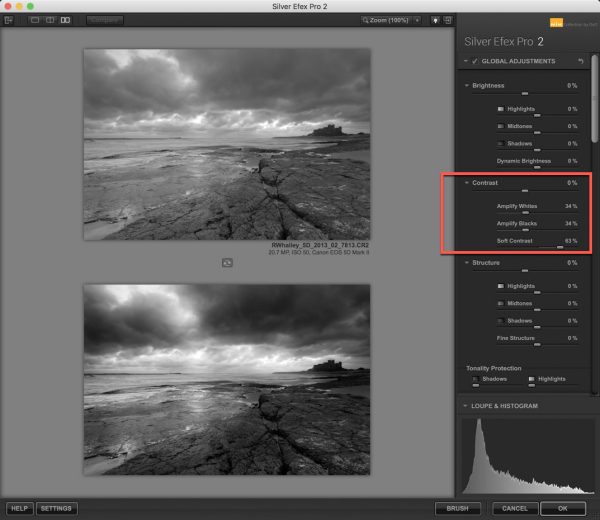 Here you can see the effect of the Contrast adjustments (outlined by the red box) on the image. The original image is at the top and the adjusted image below it.

Once you have your Soft Contrast and Amplify adjustments in place, you can apply any additional Contrast adjustment. If you find this causes your image to appear a little too dark, work through the three slides again to refine your adjustments. You shouldn’t need to make large changes.

With your Contrast adjustments in place, we can turn our attention to the Brightness adjustments. Here you will find five sliders, Brightness, Highlights, Midtones, Shadows and Dynamic Brightness.

Start by adjusting the Dynamic Brightness slider, moving it left to darken the image or right to lighten it. You can then use the Highlights, Midtones and Shadows sliders to fine-tune the image. In most cases, you won’t have a need to use the Brightness slider unless the image exposure is completely wrong.

In the following screenshot of the image in Silver Efex Pro, you can see the Brightness adjustments applied to the image. 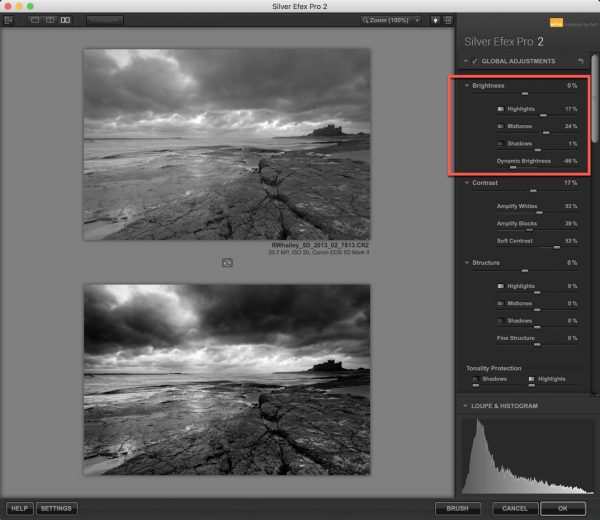 Notice how dramatic the lower photo appears when compared to the starting image at the top.

You may find that some areas of your photo don’t respond well to strong Global Adjustments. In this example, the castle has become very dark and now appears as a silhouette against the sky. One solution is to protect these areas using the Tonality Protection sliders in Silver Efex Pro. You can see these to the bottom of the Global Adjustments panel.

Here you can protect both the Shadows and the Highlights using the relevant sliders. As you move a slider to the right, you will see the lightest or darkest tones in the histogram move towards the centre. This prevents the tones from becoming pure black or pure white and losing detail.

You should be cautious when using these sliders. They can leave the image appearing a little flat and affect the contrast. If you find this is happening, consider using Control Points to target the problem area rather than the Tonality Protection sliders.

If you would like to know more about the Bitesize Nik Tutorials series, you can view the Playlist on Youtube. I’m adding more videos all the time.

To learn more about using Nik Silver Efex you should also watch turning a dull grey day into a dramatic black and white landscape.