How to Create Film Grain Texture in Photoshop

There’s also a second approach to adding film grain to an image in Photoshop, which is to use the Camera RAW filter. This second method is simpler but offers far less control. See my tutorial to learn how to add film grain using Adobe Camera RAW from within Photoshop.

Although this tutorial uses screenshots from older versions of Adobe Photoshop, it has been checked and works with the latest version. At the time of writing, this is Photoshop CC (2019).

Step 1 – Add a Layer for the Film Grain

Start by opening the image that you want to add the film grain texture to in Photoshop.

Before proceeding further, check that the Photoshop Layers Window is visible. If it’s not, you can display it by selecting “Windows | Layer” from the menu. Alternatively, use the shortcut function key F7 to toggle the Layers window on and off.

Once the Layer Window is visible, add a new empty layer. This new layer is where we will add the film grain effect. Having the film grain on a separate layer also provides us with more control over the effect, as you will see.

The best way to add your new layer is from the Photoshop menu by selecting “Layers | New | Layer…”. This displays the “New Layer” dialog which you can see below.

When the “New Layer” dialog is displayed, enter the name of the new layer, in this example “Grain”. Naming each layer is a good discipline, helping you quickly identify each layer and its purpose.

We also need to set a couple of other settings in this dialog to help create a grain effect. The first is changing the Mode to “Overlay” from “Normal”. This sets the blending mode of the layer which helps to create a realistic film grain texture effect.

Once the Mode has been set to “Overlay”, the second option becomes available. This is the “Fill with Overlay-neutral color (50% gray)”. Be sure to tick this option as we want Photoshop to create the layer filled with midtone grey. If you forget to tick this option, you will need to fill it manually or delete the layer and add it again (which is usually faster).

Once you’ve applied these changes to the dialog, click the OK button. This will add the new layer ready for us to add a film grain effect. You should also see the new Grain layer in the Layers Window as shown below. 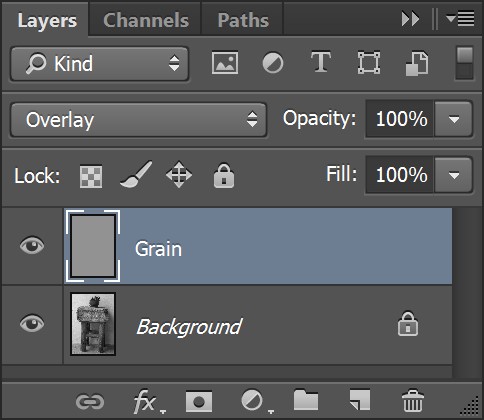 Click on the new Grain layer in the Layer Window to ensure the layer’s selected. If you don’t have the layer selected the next step won’t work properly.

We’re now going to use the Photoshop Add Noise filter to create the film grain texture. To do this select “Filter | Noise | Add noise…” in the Photoshop menu. This will display the “Add Noise” dialog as shown below. 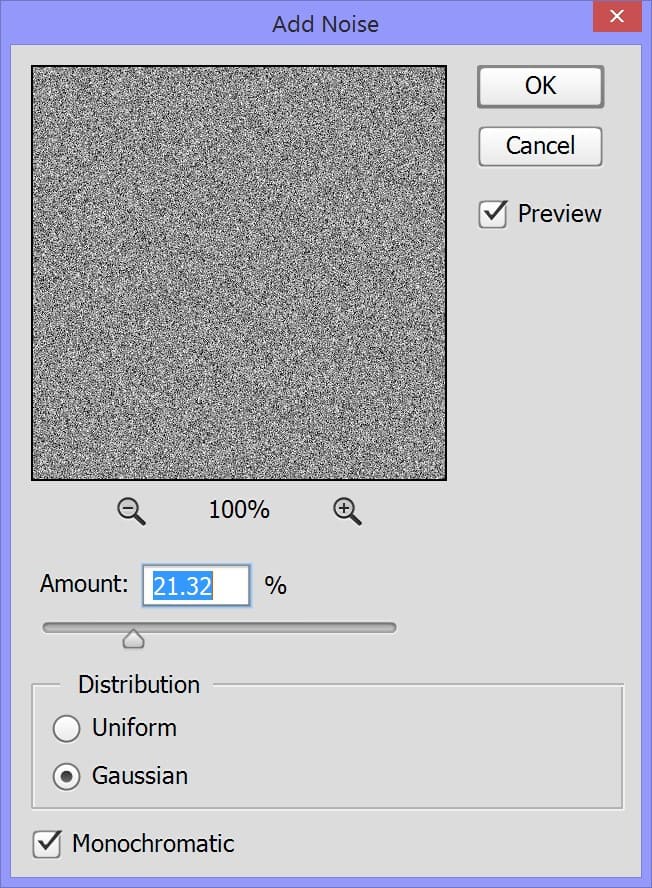 Start by selecting the Gaussian option in the Distribution section of the dialog and click the Monochromatic option if not already selected. This created a more realistic grain pattern and that the grain is black and white.

It can also help to have your image magnified to 100% whilst doing this as it’s usually easier to judge the film grain. You can see an example of this below. 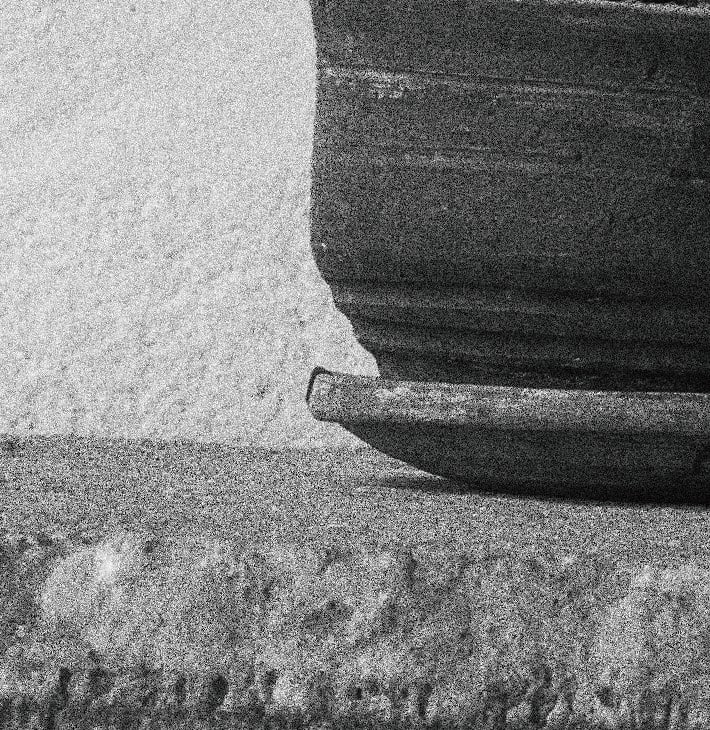 When you’re satisfied with the effect, click the OK button to apply the noise to the Grain layer. You’ve now created a realistic film grain texture effect for your image, but you can still refine this further with the following steps.

It’s quite possible the film grain effect you’ve created will be a little harsh. That’s because the noise created by the Add Noise filter has very clearly defined edges. If you compare this to film grain, true film grain is often a little softer (depending on the film developer and development method). We can though reproduce this softer film grain effect using the Photoshop Gaussian Blur filter.

Before applying the Gaussian Blur filter, check that you have the Grain layer selected in the Layers Window. If it’s not selected, click on the layer. 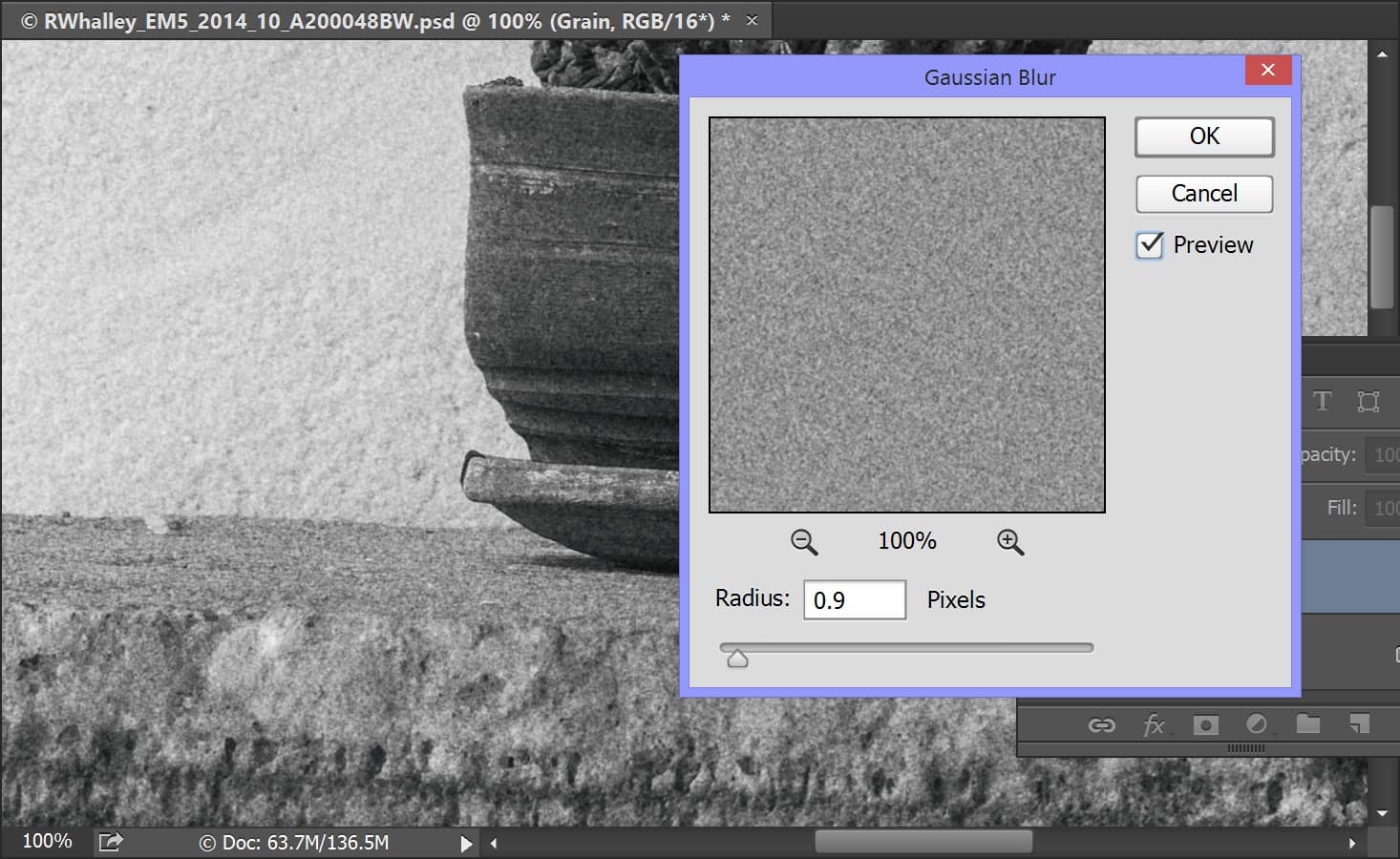 Again, be sure you have the Preview option in the dialog ticked so you can see its effect on the image. It’s also advisable to have the image at 100% magnification to help you judge the level of blur to apply. Usually, a level of 0.5 to 2 pixels radius is enough. More than this and the film grain texture begins to blend into the image.

Once you’re satisfied with the blur, click the OK button to apply it to the Grain layer. You’ve now created a realistic film grain texture effect.

Here are a few more tips you can try with the Grain layer to refine the film grain effect:

In the following screenshot, you can see we’ve used two Grain Layers to achieve a stronger but still realistic film grain effect. 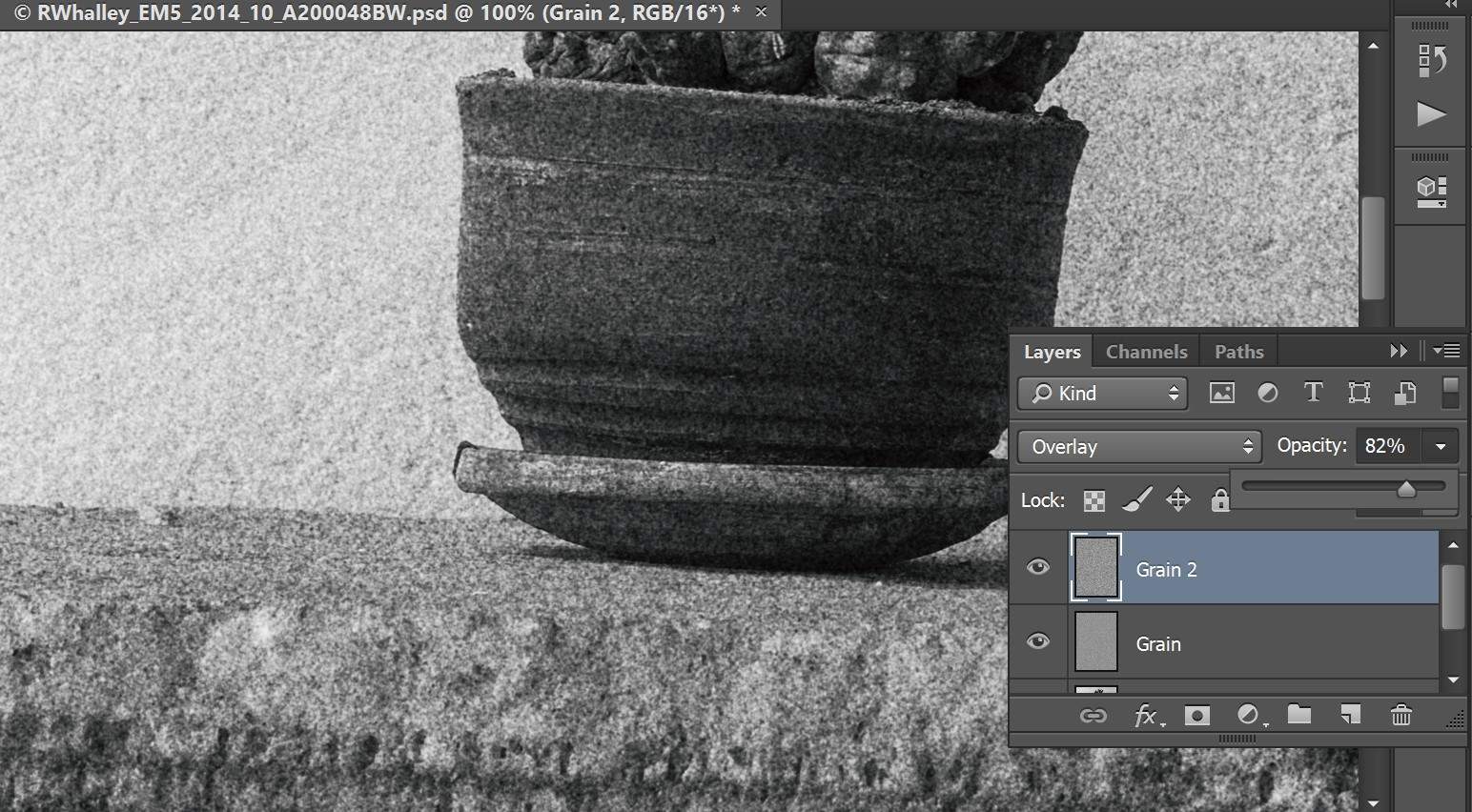 Although this example has used the Overlay and Soft Light blending modes in Photoshop, we can also use others. Two examples are Multiply and Screen.

When you use the Multiply blending mode you produce a darker film grain effect whilst Screen produces a lighter effect. In each case, be sure to click the “Fill with Overlay-neutral” option when adding your new layer. Just be aware that the overlay neutral colours for Multiply and Screen modes are black and white, not midtone grey.

In the following screenshot, you can see a third layer which uses the Multiply blending mode. 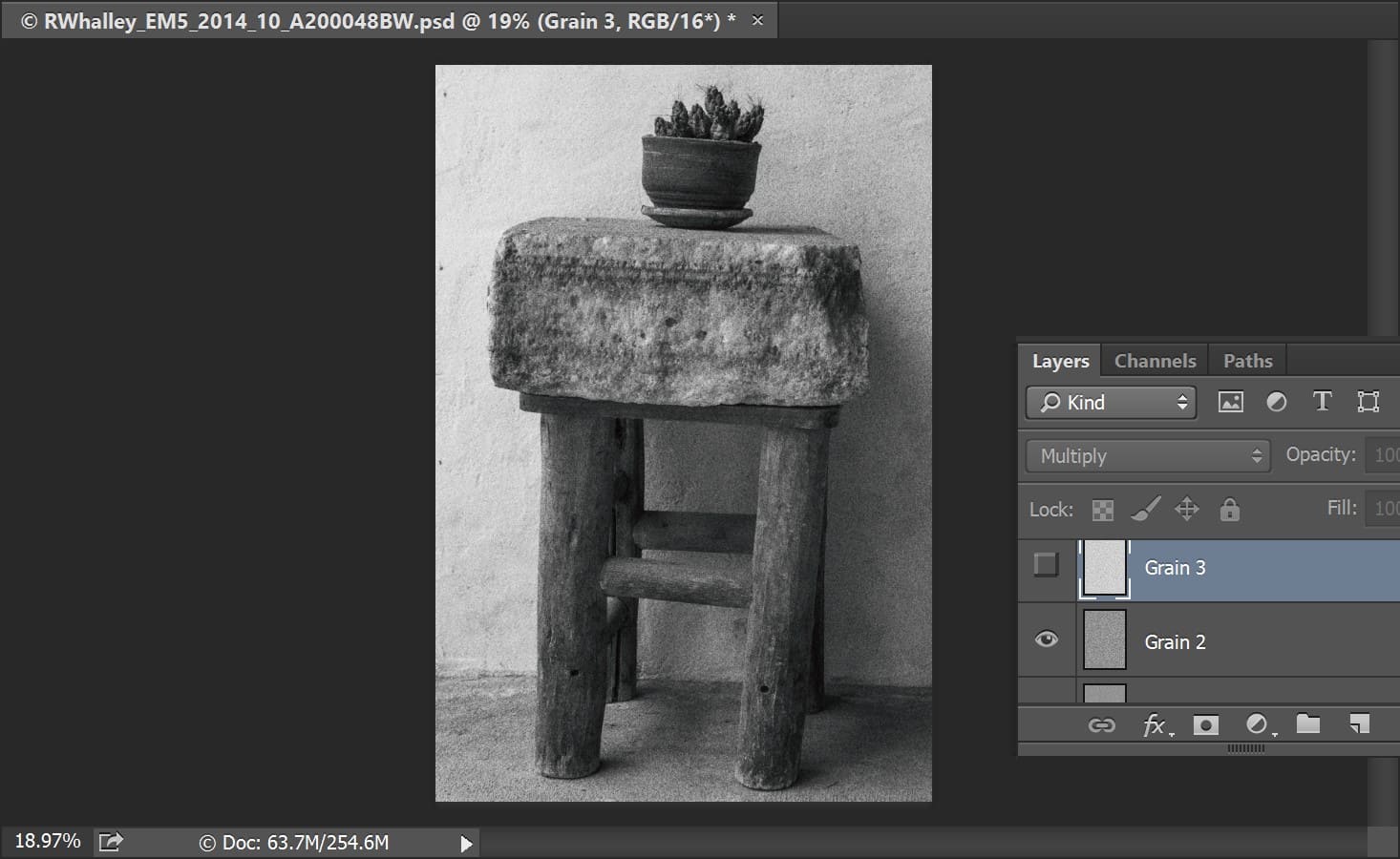 Whilst this approach to adding a film grain texture effect is relatively simple, it’s extremely flexible. Whilst you can create a film grain effect more easily using the Photoshop Camera RAW filter, the approach in this tutorial allows you much greater control over the final grain effect.