In this tutorial we’re going to look at how you can simulate film grain using the Camera RAW filter in Photoshop. I’ve also produced a separate tutorial explaining an alternative approach to adding film grain in Photoshop using Layers. This is another approach you might like to consider which is a little more complex but offers additional control, not available in the Camera RAW filter.

In this video tutorial we look at how you can use the Photoshop Camera RAW filter to simulate film grain in your digital photos. Following the video you will find a complete tutorial walking you through the steps.

If you shoot your photography in RAW format and process your images using Photoshop, it’s quite likely you have already used the Camera RAW. Camera RAW is an application which Photoshop uses to convert RAW files into images. But, Camera RAW can also process and apply affects to regular images such as JPEGs and TIFFs.

In this tutorial we will be using Camera RAW to simulate film grain in two ways:

Either method works well. Which is best for you will depends on your workflow and intended purpose for the finished image. One piece of advice that I can offer is to think about your intended processing to decide when to add the grain effect. Here’s two alternatives as an example. 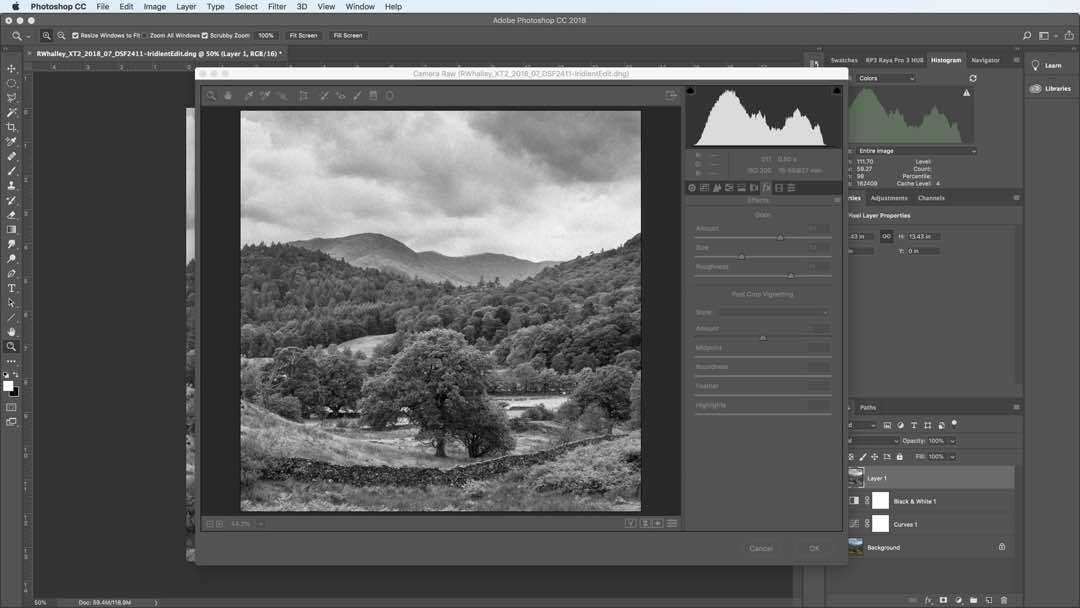 If you will be reducing the resolution of your image significantly, for example to display on the internet, its best to add the film grain simulation after the image has been resized. Reducing the size of an image with grain can reduce the grain effect.

Here’s the process to simulate film grain during RAW conversion. You can use the same approach to process and apply a grain effect to any image file. Later we’ll explore an alternative approach to this.

It’s possible to open any file in Adobe Camera RAW using the following steps in Photoshop.

An alternative approach which possibly offers more flexibility and control is to apply the Camera RAW filter to a new Photoshop layer.

Applying the Camera RAW Filter to a Layer

The approach is very similar to that described above except you apply the adjustment as a filter. Here are the steps.

You can now apply your changes in the Camera RAW filter as described previously.

The benefit of using this approach is that you can convert your new layer to use Smart Filters before applying the Camera RAW filter. Converting the layer for use with Smart Filters means Photoshop retains any adjustments you apply in the Smart Filter. This allows you to reopen the filter and tweak your adjustments in the future.

This tutorial has presented a couple of ways you can use to apply a grain effect to your photos in Photoshop. Both use the grain feature of Camera RAW but in different ways and allow you plenty of flexibility depending how you will ultimately publish your photo.