How to Find & Organise Your Lightroom Presets Folder

In this tutorial, we’re going to take a close look at the Lightroom Presets Folder.  You will learn about:

If you’re trying to find the Lightroom Presets folder to install new Presets, I recommend you read/watch my Presets Installation tutorial first. It could save you a lot of time.

Where are Lightroom Presets Stored?

It’s always been a common question amongst Lightroom users who buy or develop their own Presets; “where are Lightroom Presets stored”. Until recently, this was an easy question to answer. In fact, here are the steps to finding the folder as this still works for a lot of Lightroom users:

Then in April 2018, Adobe moved the Lightroom Presets folder and complicate things further changed the format used to store Lightroom Presets. If you’re using version 7.3 or later of Adobe Lightroom, the steps above won’t work and will probably leave you feeling highly frustrated.

If you follow the above steps and find the Develop Presets, it’s possible that you’re looking at the wrong folder. That’s because when Adobe released version 7.3 of Lightroom (April 2018) they made a couple of changes. One was to the format of the Lightroom Preset files, which became XMP files rather than lrtemplate files. The other was to the location of the Develop Presets folder. Things can easily get a little muddled because the old folders and files are still there, but Lightroom’s using a new folder location.

The new location for the Lightroom Presets folder is in the “Adobe\CameraRaw\Settings” folder. On a Windows PC, you will find this in the Users folder. Here’s an example where Windows is on my C drive and “rnwhalley” is the user.

On a Mac, the location’s a little different. Here’s an example from my Mac computer. 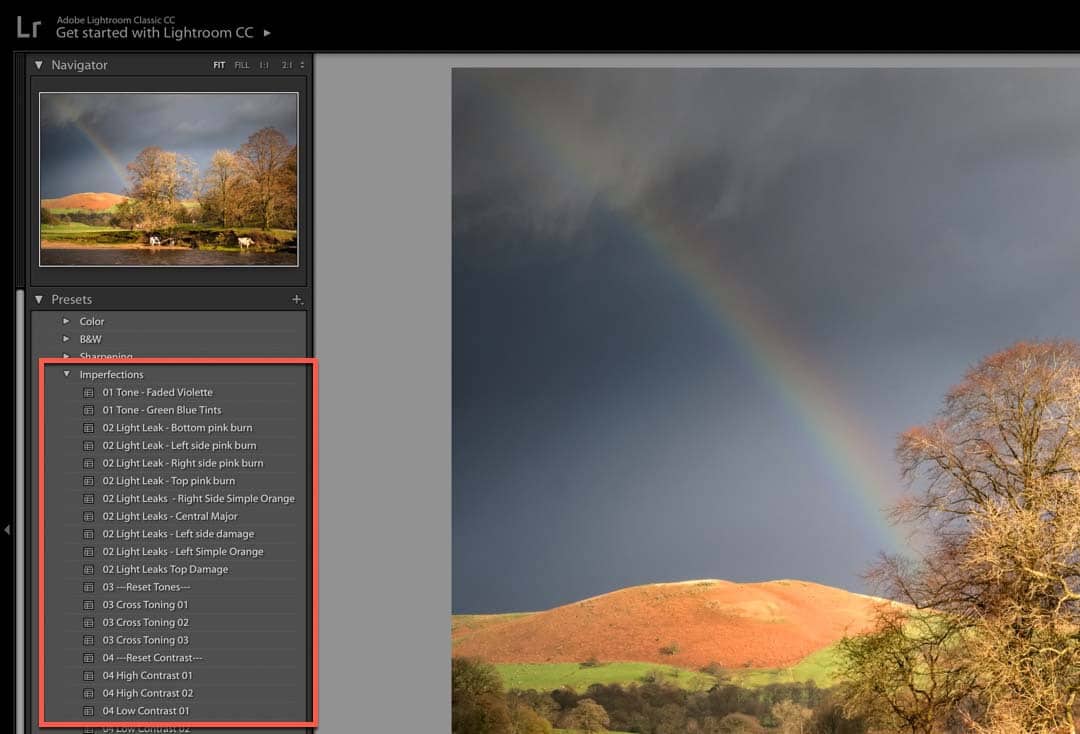 This makes organising your Presets very easy using either the Mac Finder or Windows File Explorer. You can create folders and move Preset files around as you like. You don’t need to use the Lightroom interface at all. The changes show up in the Presets panel of Lightroom once you restart Lightroom.

But the ease of organising and managing your Lightroom Presets doesn’t stop there. The Presets panel has a popup menu which you use to create a new Preset Folder. You just right click on the Presets panel and select the “New Folder” option. 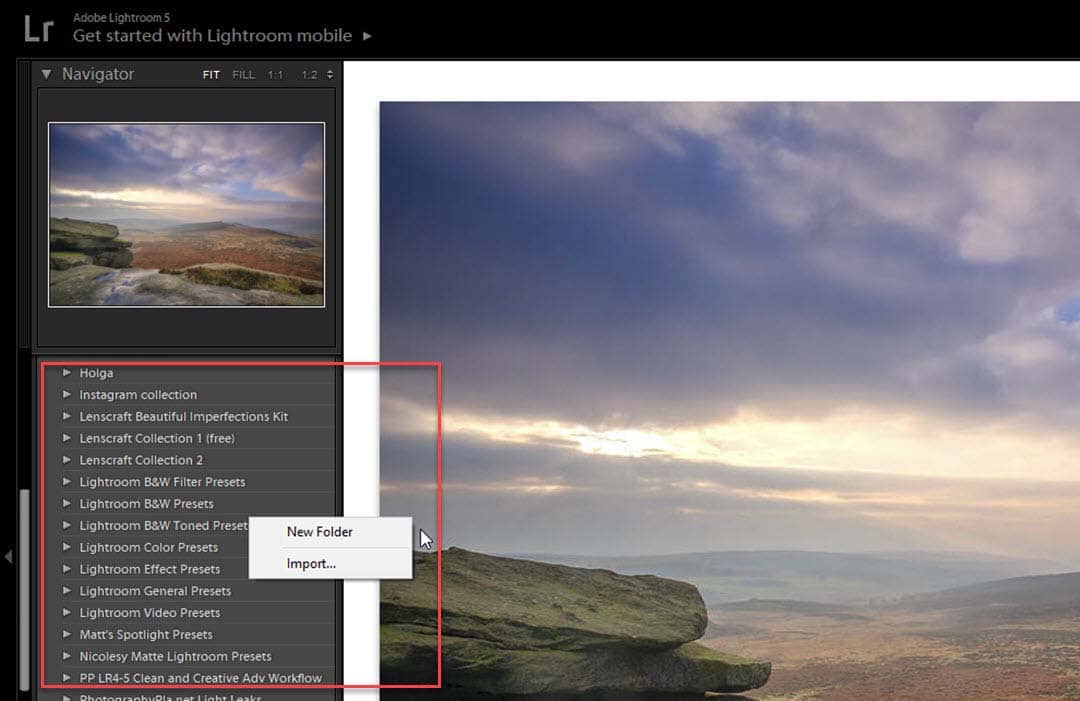 Everything you need to learn photo editing in Lightroom. A complete video course for beginning and intermediate level users.

30-day, no questions money back guarantee

Now if you’re using Lightroom v7.3 or later, some of these features are missing.

Organising the Lightroom Presets Folder in v7.3 or Later

In version 7.3 of Lightroom, the option to create a new folder is gone. It’s now only possible to rename or delete a Group (that’s the new name for a Preset Folder). Also gone is the ability of Lightroom to reflect any changes you make directly in the Presets folder. Or should I say Settings folder now the location has changed.

This means you shouldn’t use the Mac Finder or Windows Explorer to organise your Presets. Lightroom won’t reflect any changes you make using these tools. If you want to understand why, my Presets Implementation tutorial explains what’s happening.

Instead, the way to move your Presets between the different folders, sorry Groups, in the Presets panel is by dragging and dropping. You need to use your mouse to move the presets around.

If you want to create a new folder for your Presets, you need to use a bit of a workaround. There are two ways you can do this: 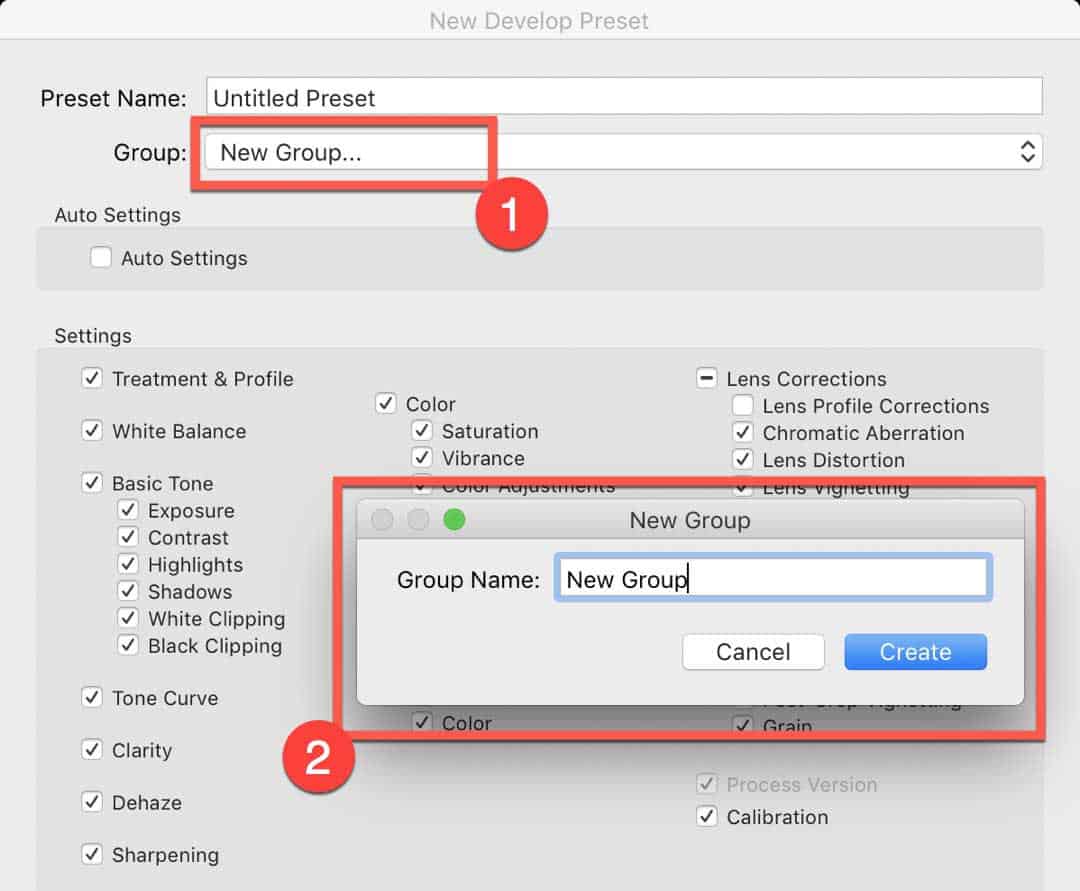 Through the changes made to Lightroom 7.3, Adobe has simplified the organisation/management of Lightroom Presets. Unfortunately, at the same time, the changes have complicated things for a lot of existing users who need to make the switch.