Good processing can make a huge difference the quality of a photograph. Many people view image editing as but it’s an essential step in modern digital photography. If you don’t process your images you won’t realise the true beauty locked away -n your digital files. This image of Foss waterfall demonstrates this well.

Below you can see the starting image prior to any processing being carried out. 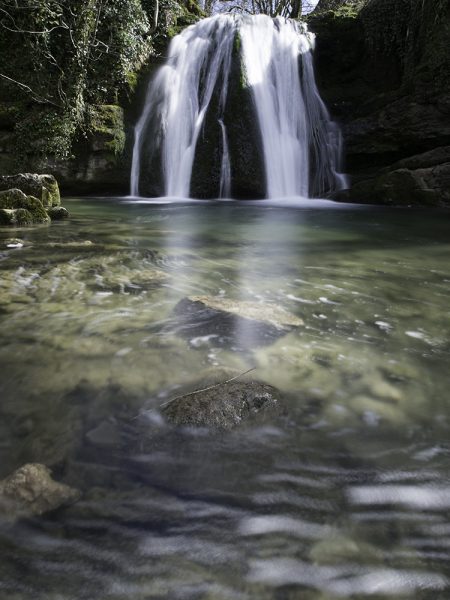 The image at this point is full of harsh shadows and contrast and whilst the location is beautiful, this picture certainly doesn’t convey this. If I didn’t have a vision for this image when I shot the photography, I would probably overlook the image or even delete it. As a photographic you need to realise your vision in the image and share it with your audience.

The image was captured using an Olympus OMD EM5 digital camera. This is a Micro 43 camera with a 16Mpixels sensor. The lens was an Olympus 12-40mm lens set to 15mm. The camera ISO was set to ISO200 which is the base ISO for this camera and should provide the greatest dynamic range and image quality.

The lens aperture was set to f/7.1 and the point of focus placed on the rock in the foreground. This gave an excellent combination of quality and depth of field. A slow shutter speed of 12″ was used to allow the movement in the water to become evident. It was necessary to use a 6 stop filter (a Lee Seven 5 little stopper). With the shutter speed so slow it was necessary to mount the camera on a tripod and use a remote release to trigger the shot.

The image above was captured in RAW format to produce the highest quality image and also provide more flexibility in processing. The conversion from RAW was carried out in Lightroom before the resulting image was transferred into Photoshop for further adjustment.

With the image (RAW file) selected in the Lightroom develop the first change was to switch the camera profile from the default Adobe profile to a custom profile I had previously created for the EM5. If you are a Lenscraft Member you can download this profile from the Camera Profiles page of the lenscraft site. 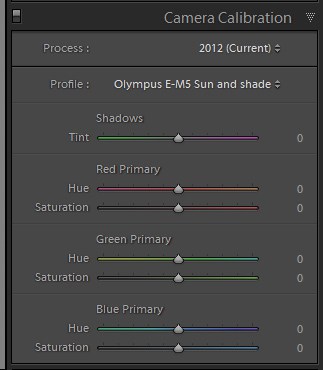 Changing the Camera Profile in Lightroom

You can change to another profile (if you have one installed) using the “Camera Calibration” tab as shown below. You will find any other compatible profiles installed to your computer, in the “Profile” . Remember, only those profiles created specifically for your camera will be available. Also that you can only change profiles when you are editing a RAW file.

Changing the profile is not essential but I have found the custom profiles perform better than those shipped with Lightroom.

Having changed the colour profile I start to edit the image using the controls in the “Basic” panel which is shown below. 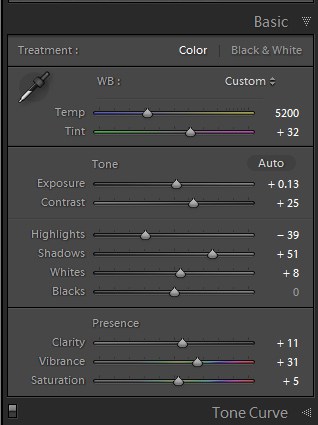 I started editing by increasing the contrast (+25) as the high contrast range of the scene, the image was lacking contrast. I then progressed to adjusting the Highlights, Shadows and Whites sliders. Here the Highlights slider has been reduced to control the highlights in the waterfall from becoming blown out. This then necessitated a slight increase to the Whites slider to give the image some of it’s “sparkle” back. The other point to notice in these sliders is the large increase in the Shadows slider in an attempt to open some of the shadows in the rocks around the waterfall.

This image is quite green from the surrounding foliage and the shade was also causing a strong blue tint in some areas. I used the white balance tool to select a white balance point from the waterfall. This set the Temp and Tint sliders as seen in the screenshot.

The next group of sliders to be adjusted was the Clarity, Vibrance and Saturation levels. There is no secret here other than to say don’t go too string with any of the sliders and to simply judge when you are happy.

I tweaked the Exposure slider slightly to give a little more brilliance to the image whilst being careful not to blow out the highlights in the water.

The other area of adjustment I want to make is to the dark shadow areas around the waterfall. You can see these in the following screenshot. 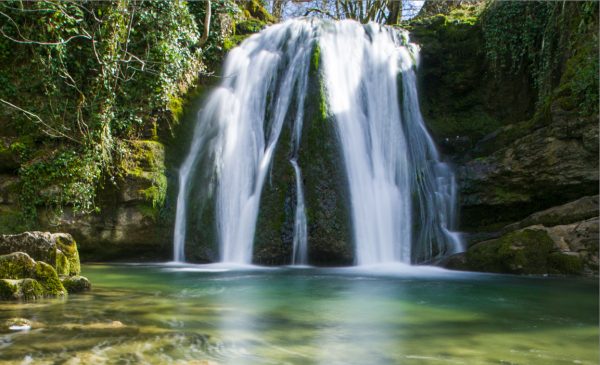 In the following you can see the brush settings being used. This was used to paint over the dark rocks in order to open up the shadows. The red areas of the image are the mask which shows the areas where the adjustment has been painted.

Using the Adjustment Brush in Lightroom to open up the shadows

A further adjustment is them made to the water in the waterfall to add definition using the clarity slider. This is done by adding a “New” adjustment brush. You can see the adjustment settings and where they have been applied in the following .

Using Clarity to add definition to the water

Notice also how the contrast has been removed from the water it would become too bright and lose detail. The reduction in the Highlights and increase in the Shadow sliders also help to remove the contrast.

With the RAW adjustments complete the image is as shown below together with the starting image, and is ready for further processing in Photoshop. 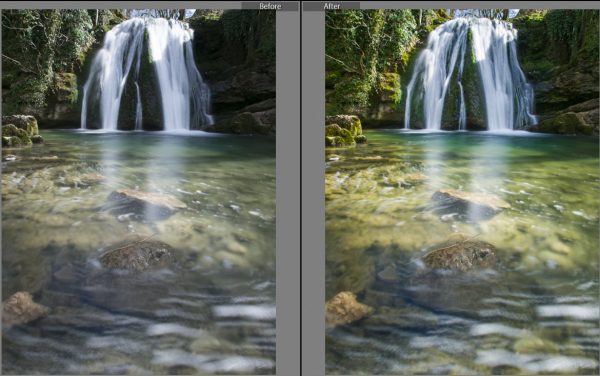 Comparing the before and after image following Lightroom adjustment

The intention in Photoshop is to process the image using the Nik Color Efex plug-in filter. I am a big believer in using plug-ins from the likes of Nik, Topaz and others. You can read more about the filters I use on the Useful Software page of Lenscraft.

Nike Color Efex offers a huge range of filter adjustments which can be rather confusing. If you would like to know more about the range of filters and what they do, please see my books which cost about the same as a photography magazine.

For this image the three filters I want to use are “Pro Contrast” and in particular the Dynamic Contrast slider, Detail Extractor in order to open up the shadow detail further and the Lens Vignette filter to darken the edges of the image.

In the following you can see the strong dynamic contrast being added the image. This also has the effect of opening up the shadows a little more and is one of the most useful contrast enhancement tools for landscape scenes. 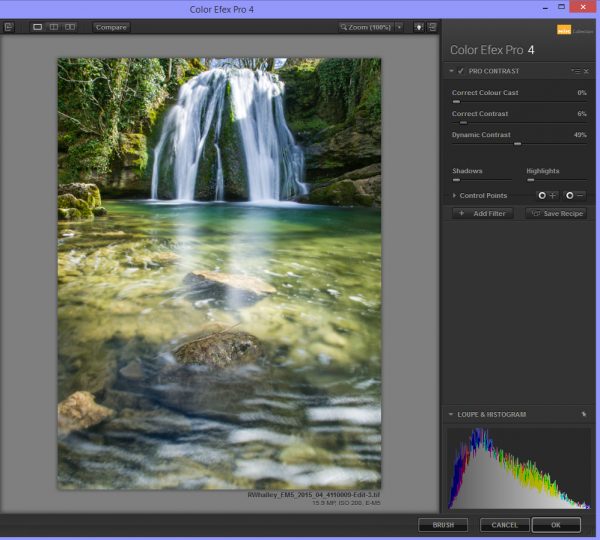 The following shows how the Detail Extractor is used to open up the shadow details. 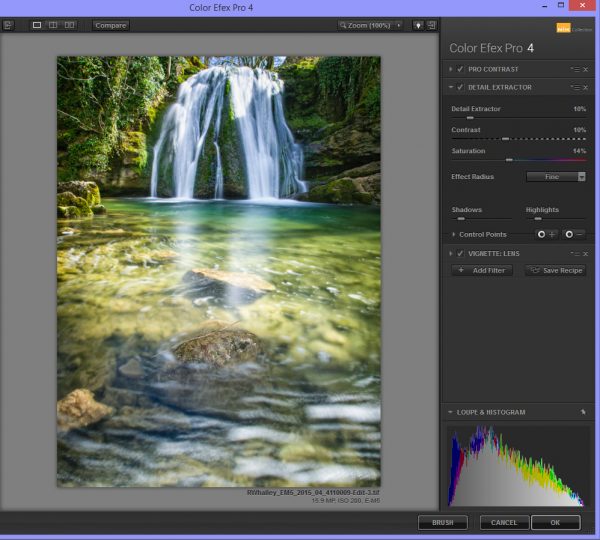 This also necessitates a further contrast adjustment otherwise the image becomes too open.

there is the Lens Vignette which is used to darken the corners and edges of the image as shown below. 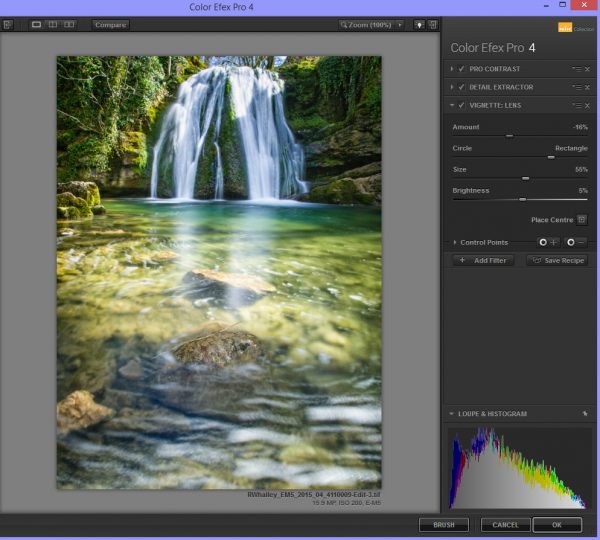 Adding a vignette around the image with the Lens Vignette filter

The image adjustments are now complete. The OK button is clicked to return to Photoshop.

The finished image appears natural yet is a huge improvement on the starting image. The final image can be seen below with the original image inset bottom right. 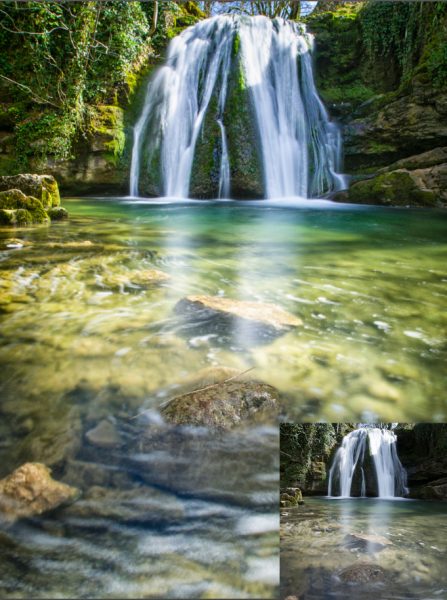