From time to time I like to share details about how I created one of my images. I tend to do this where it illustrates an interesting technique. Whilst the image here is a relatively simple one it does serve to illustrate a nice enhancement technique you can use with the Nik Collection or similar tools.

Notice how flat and lifeless this image looks in comparison to the finished image. 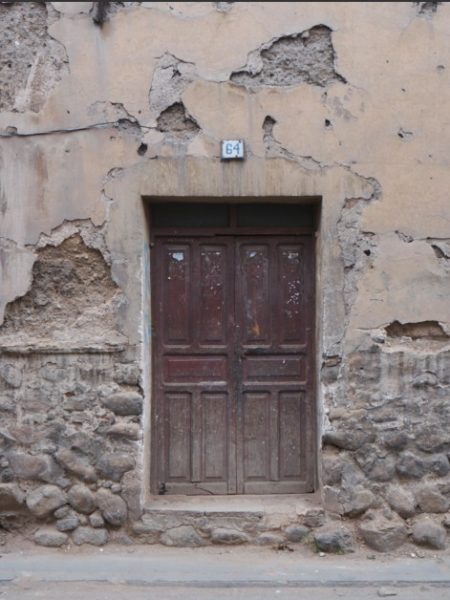 As you can see, this image as a complete departure from the finished image (shown later). I would stress in my defence that the finished image is what I had in my mind as soon as I noticed these doorways. And that’s one of the secrets of good photography; being able to recognise the potential in a scene when you see it and to pre-visualised the finished image at the time of capture. This is also a great lesson in how limiting it can be to simply rely on the enhancement tools in your RAW converter.

Shooting the door was quite simple. I took care to hold the camera so that it was level, making the sensor parallel to the wall. This ensured there were no converging verticals to be corrected. The image was captured in RAW format at ISO200 and f/5.6. This gave a shutter speed of 1/15″ which was just fast enough to handhold. In hindsight, I should really have gone to ISO400 as the rough texture of the scene would have hidden any slight increase in noise.

I won’t cover the processing of the RAW file into the image above other than to say that the aim was to produce a starting image with sufficient colour and contrast to allow further selective enhancement using the Nik collection tools. I will also say that the conversion was made to a 16bit TIFF file using the ProPhoto RGB colour space. This is intended to maximise image quality and permit the greatest range of colour tones. The resulting TIFF file was then taken into Photoshop to allow further work. 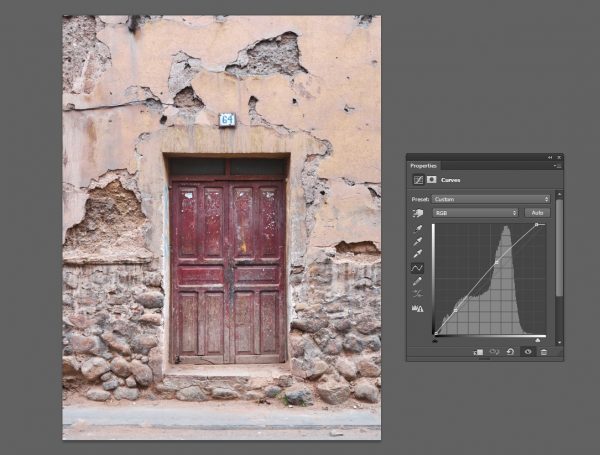 Overall the image is a little too dark and would benefit from lightening. You can see the curve in the above diagram. Notice how the white point has been moved to the left so as to draw the entire histogram to the right. A further adjustment point has then been added to increase the . this opened the shadows a little too much so has been added in the shadow area of the curve and moved downwards to darken these slightly.

Viveza is great to help adjust and enhance colours as well as add a little contrast and structure to the image.

First Global adjustments were added to increase Contrast, Saturation and Structure by 10% each. a value of -30% was set for the Shadow Adjustment. this slider is used to open up shadows but it can also be helpful to set a negative value if the image appears a little flat as in this case.

a control point is added to target the red of the door but this is expanded so that it also selects some of the reds in the wall. The Saturation and Structure sliders are then set to 30% and the Contrast slider to 10%. A little additional warmth has been introduced by using a value of 10% for the Warmth slider.

This has made quite an improvement to the image so we will leave Viveza here and move on to Color Efex to bring out the details.

At this I feel the image is looking a little orange and I want to correct it slightly. My favourite tool to help with this is the Pro-Contrast filter. 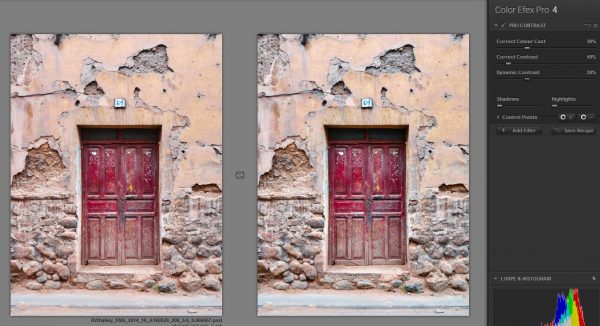 Here the Correct Color Cast slider has been set to 30% as this starts to introduce some nice faint blue tones into the image. I also use a Dynamic Contrast value of 30% which opens the shadows just a little too much but is corrected with a value of 10% for the Contrast slider. I then add the Tonal Contrast filter to target the walls. 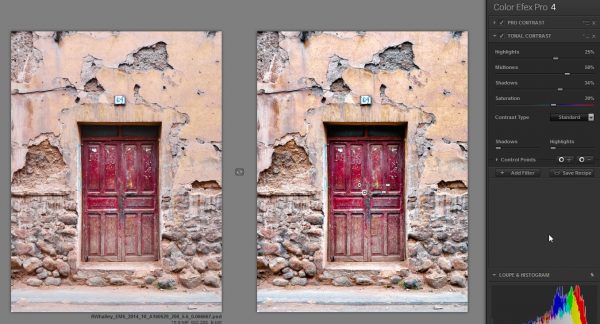 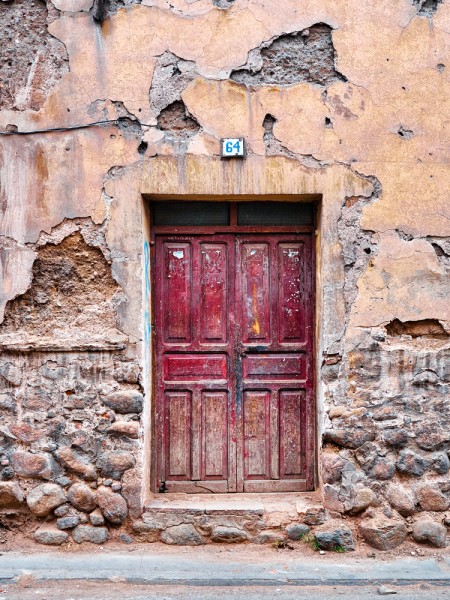 At this you have the finished image. But you can take things a little further using Nik Sharpener Pro and the Output Sharpener. Not only can you sharpen the image but the Structure and Local Contract adjustments are great for making the details in the wall pop out.