A lot of tasks in Photoshop can be quite time consuming and repetitive. Such activities are prime candidates for automation using Photoshop Actions. To provide you with a real life example, a friend of mine likes to prepare his image for Flickr with a nice white border. By recording the steps to add the border using Photoshop Actions, the Actions can be replayed against any image. You can read more about this in the tutorial Preparing an Image for Flickr.

In a moment we will look at how to record a Photoshop action, but first it’s important we look at how actions are organised. If we don’t get this organisation set up it will become increasingly difficult to find and use the actions in the future.

We manage and organise our Photoshop Actions using the Actions Window. You can see an example of this below. 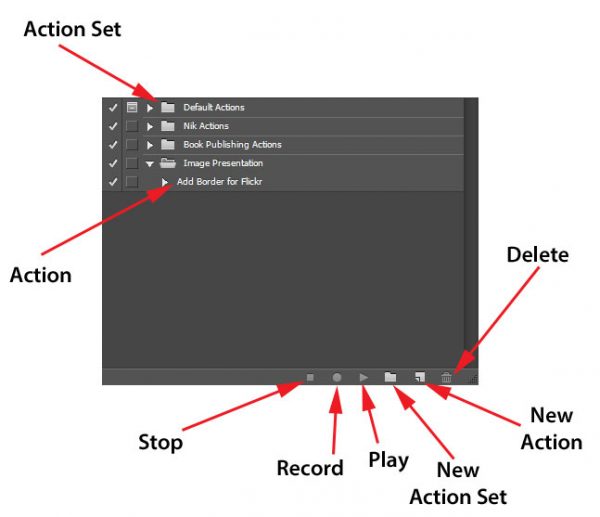 Overview of the Photoshop Actions Window

If you can’t see your actions window it’s probably not open. You can open it by selecting “Window | Actions” in the Photoshop Menu. You can also use the keyboard shortcut which is “Alt + F9” (Alt is the Option key on the Mac).

When it comes to organising your actions the first rule is to give the action a meaningful name so that you understand what it’s doing when you see it at a later date. You can also rename existing Photoshop Actions to give them a more descriptive name by double clicking on them in the Actions window.

The second guideline to follow is that you can place groups of related actions under an Action Set. The Action Set should also have a descriptive name that categorises all the actions it contains. Once you have a number of Action Sets created you are able to drag and drop Actions between these.

Follow these simple rules and you will find using Actions becomes more productive.

Having organised our Actions window let’s look at how to record a new action.

Here are the steps to record a new action:

To replay an action against an image take the following steps:

There is an alternative to the above process using a shortcut key as described below.

When using the “Create new action” dialog you can set another useful feature which is to assign a Key to the action. The key then acts as a shortcut for when you want to play the action back. Rather than selecting the action in the Actions window and clicking on the “Play” button, you would just press the assigned key.

In the Actions window you can expand an existing action and select individual steps. It’s then possible to delete any of these steps if you find you have added a step in error. You can also change the order of execution by dragging the step to another location in the action. If you find you have all the editing steps recorded but you want to make a change to a particular step you can edit the step by double clicking it and entering the new settings. You can see an example of this below. 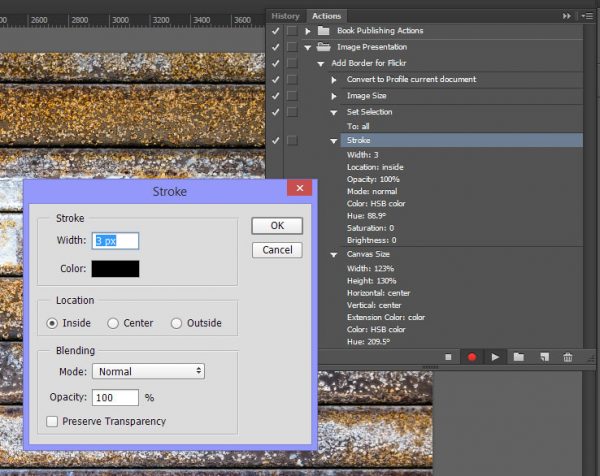 Selecting and editing a step in a Photoshop Action

Once you have an action recorded you are able to play it back automatically against a group of images in a folder.

Using Photoshop Actions to help process your photos can be a significant time saver. Watch out for tasks that you find yourself repeating regularly in Photoshop. These are prime candidates to be automated.