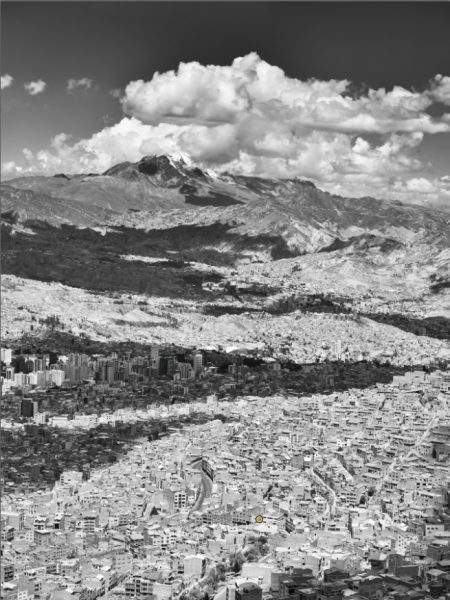 I recently published this image on my Lightweight Photographer blog. At the time I didn’t think too much about it and to be honest I was rushing a little so didn’t save the file with Smart Objects in place. Little did I know it would draw quite so much attention and that I would need to return to the image to reproduce it for a tutorial.

Here then is my attempt to recreate the finished image (so it might not be identical to the original).

In the following shot you can see the starting image although it isn’t the very start as this image has already been processed from RAW to TIFF using Lightroom. 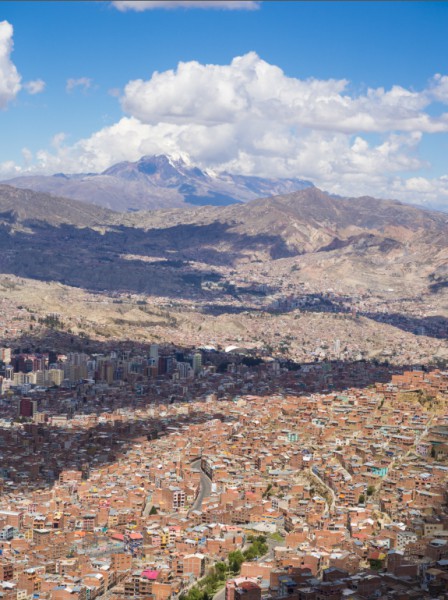 This image was captured above La Paz, just near to the airport, overlooking the city. As you can see it’s an amazing view. The camera used was an Olympus OMD EM5 which was set to ISO200 (which is it’s base ISO). I always try to shoot at the base ISO in order to minimise noise and maximise dynamic range.

The lens used was the Olympus 12-40mm f/2.8 and whilst expensive, it’s worth every peny. It produces unbelievably sharp and detailed images at all apertures and focal lengths. This particular image was shot at 40mm in order to remove the cluttered foreground from the image and allow the viewer to focus on the buildings of the city.

A 0.6 (2 stop) ND Graduated filter was attached to the lens to help darken the sky. The image was then overexposed (a technique known as exposng to the right) in order to lift the shadow areas. This helps reduce noise in the shadows and makes for a high quality, clean image. The overexposure was then corrected in the post processing conversion from RAW.

The shutter speed was 1/640″ which also helps to ensure a sharp and steady image. The aperture was set to f/5.6. This was sufficient to give a completely sharp image across the frame due to the high quality lens and that the camera was focussed on infinity.

The first task in Photoshop was to remove the cloud along the top and left of the frame as this is distracting. This was achieved with the Clone tool to cover the clouds with blue sky. The fix was then painted over using the Healing Brush in order to blend the cloned area with the rest of the sky. This is a neat little trick to remember. Make a large repair with the clone tool and you can often see the repair. If this happens just paint over the area again with the healing brush.

Here is the sky area fixed.

The next step is a preventative one to avoid problems down the road. Often when processing images into black and white where there is a blue sky and white clouds, noise can become a problem. When I processed this image from a RAW file in lightroom I did apply some noise reduction but I want to do a little more in Nik Dfine. Ordinarily I suggest you don’t apply noise reduction twice in two different tools but this time I am breaking the rules and will apply noise reduction in Nik Dfine to the sky. I did this because I was in a rush but still wanted to ensure the sky was clean. I know I am being contradictory but I want to share all the steps.

You can see the mask used to do this below. 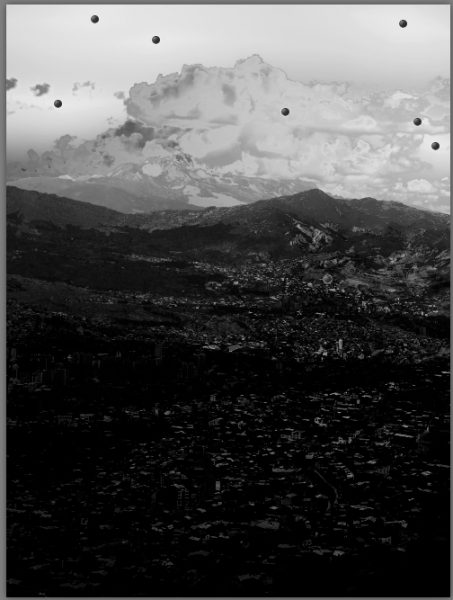 Now I can take my image into Nik Silver Efex with confidence that the quality will be good once processed. Here is the default conversion in silver Efex. 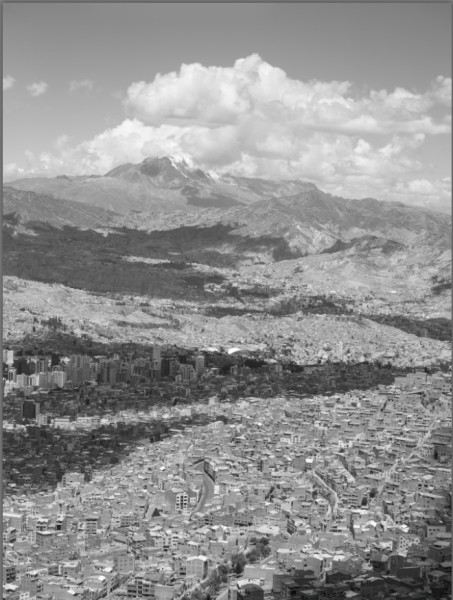 The first step to improve this rather lack luster image is to apply a yellow filter. The default strength of the yellow filter is 50% which is an improvement but not strong enough. I increase this to 100%.

This gives a nice contrasty image but the shadows are a little too dark. To open these up I set the soft contrast to -40%. 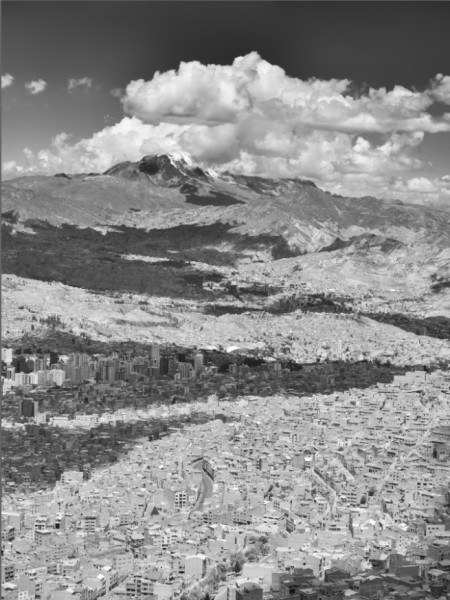 The contrast slider is then set to 20% because the image needs a little more contrast. The Dynamic Brightness slider is also reduced to -30% to bring out the rich blacks. At this point the image is looking good but the whites need to be a little brighter. The Amplify Whites slider is therefore pushed to 50% to produce the image shown below. 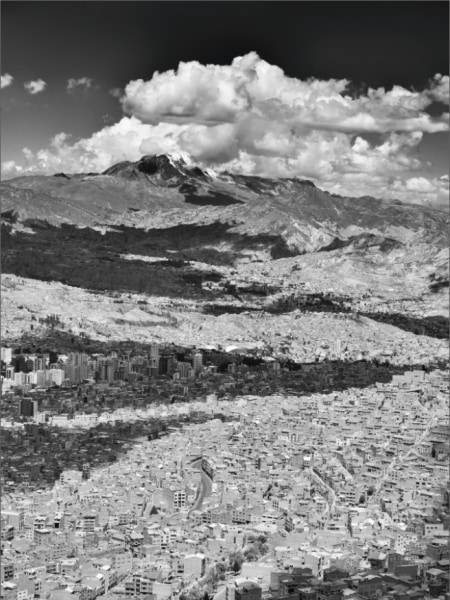 All this has been achieved using global adjustments. Finally it’s time to add in a little structure enhancement to the buildings using a control point. In the following screenshot you can see the mask created by the control point which has been used to select the foreground buildings. 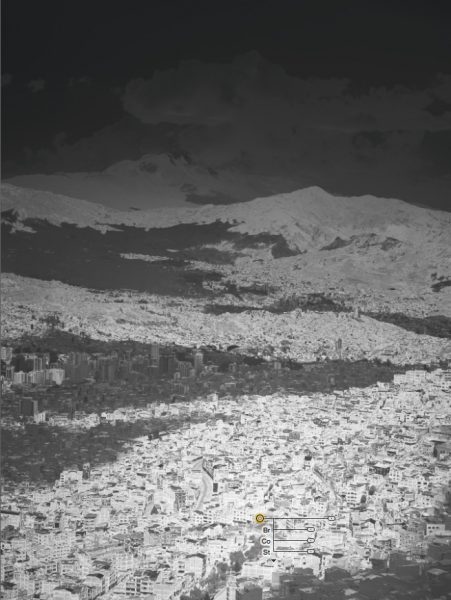 A structure setting of 50 was then used to really emphasise the building detail. I also experimented with the Contrast and Amplify Whites sliders on the control point. I found applying an adjustment of +20 for both seemed to make the buildings really pop out as well as opening up the shadows slightly. The result is shown below. 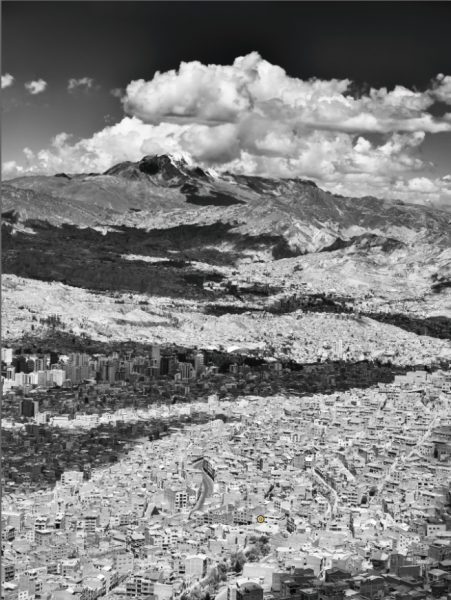 You might like this version but I found it a little too harsh after I had a break. The shadows were just a little too dark. I therefore used the “Shadows” slider in the “Tonality Protection” area to lighten these. The final image is shown below. You could of course add grain if you wish. And if you are going to print this don’t forget to do some selective sharpening on the houses.