Recently I’ve found myself increasingly turning to Topaz Sharpen AI (affiliate link) to fix problems with image sharpness. Typically, these are problems where part of the image is too soft, usually because I’ve picked the wrong focus point. Topaz Sharpen AI seems to be able to magically fix these problems and save photos that I would otherwise delete.

In this tutorial, I’ll be sharing how I use Topaz Sharpener AI as well as some problems to watch out for. You will also find a video at the end of this tutorial that demonstrates the software with the example images in the article.

Here’s a good example of the sort of problem Topaz Sharpen AI allows me to easily fix.

I shot this image of Godrevy Lighthouse in Cornwall using a Panasonic G9 with Leica 12-60 lens. Despite having the aperture set to f/9.0 I didn’t achieve enough depth of field because the focus point was too near to the camera. By the time I realised my mistake the sun was behind a thick bank of cloud and I lost my opportunity.

Here you can see sections of the image at 50% showing a sharp foreground but the lighthouse in the distance is soft.

Whilst the image has already been sharpened by the RAW converter it hasn’t been able to increase the depth of field. Here is the same section showing the lighthouse at 100% magnification but after sharpening with Topaz Sharpen AI.

Topaz Sharpen AI seems able to correct depth of field softness problems, bring out fine detail and avoid noise. Let’s look at how I like to use it to achieve this.

You can launch Topaz Sharpen AI in a couple of ways. The first is in standalone mode which has the advantage of allowing you to batch up images for sharpening. The other way and the way that I tend to use is as a Photoshop plugin on a new image layer.

After launching the plugin, you will see the Sharpen AI interface. 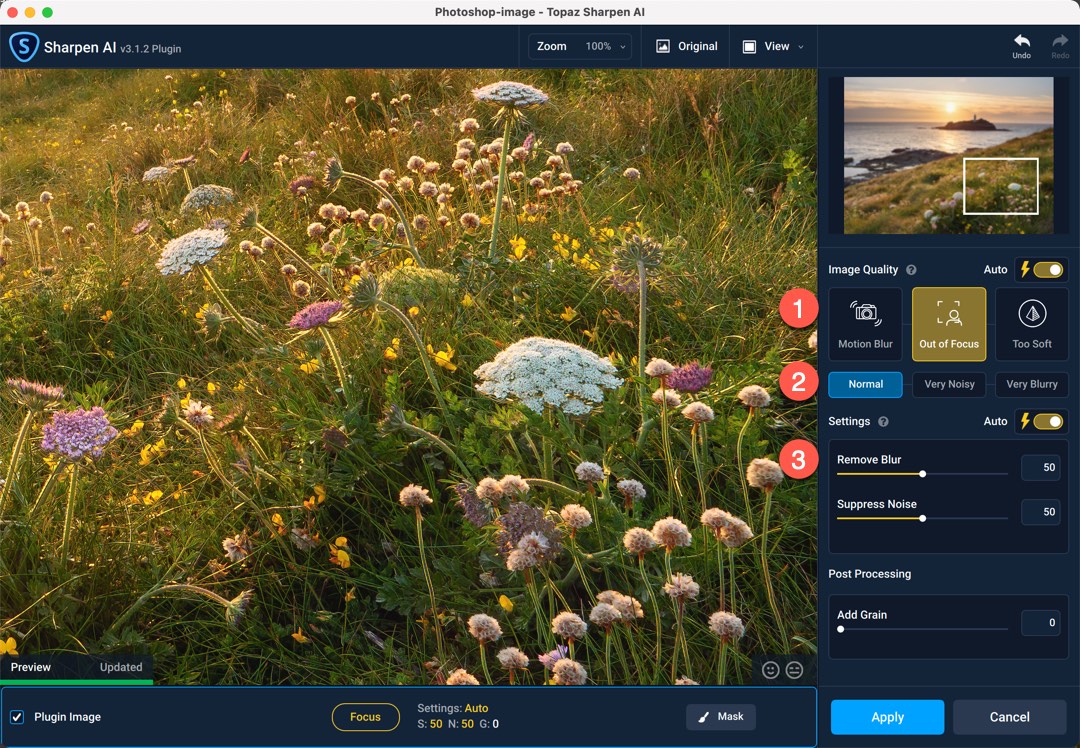 When the software opens, the image is magnified to show only a small section. You can change the location of the magnified section by clicking and dragging the image or moving the small white box in the navigator panel. You can also change the level of magnification with the Zoom dropdown at the top of the interface.

The reason the software starts with the image magnified is that whenever you move to a new area the preview updates. This processing takes time and at lower magnifications levels there is more of the image to process. This can slow performance considerably.

To sharpen your image, Topaz Sharpen AI provides three sets of controls on the right of the screen. These are numbered 1, 2 and 3 in the screenshot. It’s important to use these in a certain order or your results may not be as good as they could be. Do resist the temptation to go directly to the “Remove Blur” and “Supress Noise” sliders because there is a better way.

First select one of the three sharpening modes to use (number 1). These are:

These however are general guidelines, and you may find a different mode is unexpectedly better.

There is also an “Auto” switch just above the three mode buttons. When active, Topaz Sharpen AI will analyse the image, trying to detect the best option to use. Interestingly it doesn’t always produce a consistent result. The first few times I processed the example image (for the video) it recommended Motion Blur. Later it changed to selecting Out of Focus or sometimes Too Soft. I suspect the choice it makes depends on analysing the image preview area on startup as it changed when I resized the software window.

My recommendation is to try each of the three different modes to decide which is best for the image.

Having selected the Topaz Sharpen AI mode to use you need to select the image type (number 2). These are:

The names make it obvious when they should be used, except I’ve found it’s worth checking each. I’ve found some can produce problems as you will see shortly.

Personally, I like start with the Normal option. I then check the image, often at 200% magnification, to see if I’m satisfied or if I can spot any problems. Usually these are either sharpening halos around high contrast edges or noise becoming exaggerated.

In this example a section of the image is magnified to 200%. The Topaz Sharpen AI settings used are “Out of Focus” with the “Normal” image type. Around the base of the island, it’s creating artefacts in the sea that look like noise is being exaggerated slightly.

With this next example the Too Noisy option was used, and this proved best.

The “Settings” (number 3) in Topaz Sharpen AI has two sliders to control the sharpening and noise reduction. These are “Remove Blur” and “Suppress Noise”. There is also an “Auto” switch which I tend to leave set to on whilst selecting the sharpening mode and image type to use.

Interestingly, my experience has been that the sharpening mode and image type settings have more impact on the results than the sliders. If you do make changes, there seems to be little difference between settings. But then you suddenly pass a point, and it seems to have a big impact on the image quality. This is another reason why I like to leave the sliders set using the Auto option.

Working through the different settings and options may become confusing. Trying to remember the best combination of settings for an image and then comparing them against other settings can be difficult, especially when the differences are small. One way to make this easier is to use the Comparison view.

At the top of the interface is a dropdown to control the preview. Options include the single view, side by side view and split view as you would expect. What the Comparison view does is split the preview into four. This allows you to compare each of the sharpening modes against each other on one screen. It’s also possible to change the settings for each to select the image type and slider settings.

This makes it extremely easy to compare the various settings and options. In this example image I can see that the Motion Blur with the image set to Very Noisy produces the best results. I can then click the Apply button to apply the sharpening to the image layer and return to Photoshop.

Sometimes, as great as Topaz Sharpen AI is, you might find you don’t want it to sharpen an area of an image. This could be because the area doesn’t need sharpening or because sharpening causes a problem. When this happens, click the Mask button at the bottom of the interface.

You will then see the mask tools appear along the bottom of the screen and your mouse pointer changes to a brush. There are two ways to use the brush with the settings (number 1). You can either Add the sharpening or Sub(tract) the sharpening by painting on the image. In this example I would use the Sub option to remove the sharpening from the foreground. I can also control the Radius, Softness and Opacity of the brush (number 2) to blend the mask and effect into the image.

When painting you can have a red overlay appear on the image or you can view the mask thumbnail. There is also an Option dropdown (number 3) which you can use to clear, fill, invert or delete the mask.

After creating your mask, click the Apply Mask button to apply the mask to the image and close the masking tools. If you find you later want to make a change to the mask, just click the Mask thumbnail (number 3) at the bottom of the interface to open the tools.

Surprising Use for Topaz Sharpen AI

As well as Topaz Sharpen AI being great for saving images with depth of field problems, I’ve found another use that’s surprised me. It’s excellent for sharpening scanned film images.

In the past I’ve found sharpening software seems to struggle processing film scans. That’s not the case with Sharpen AI and the quality of the results has really surprised me.

This image is a good example. I shot it using a Pentax 67 Medium Format camera and Fuji Velvia slide film. It’s then been scanned on a 15 year old Epson Perfection V700 flatbed scanner. If you look at the image at 100% magnification you can see some of the problems.

Here is a section of the foreground viewed at 100% magnification.

Whilst there is a lot of detail in the image you can see that it’s soft. This is typical of scanning a film image using a flatbed scanner. It’s probably one of the reasons flatbeds come in for a lot of criticism. They may boast great scanning resolution, but they don’t seem to be able to resolve the detail.

Now let’s look at a closeup of the castle in the image.

As with the foreground, the castle is soft. It’s also probably on the limits of the depth of field used.

Now let’s look at what happens when we process the scan using Topaz Sharpen AI.

Here you can see the same section of foreground in the split screen view. You can clearly see the right side of the image is much sharper and appears more detailed.

The results when sharpening film are excellent but sometimes you will find faint film grain is detected and sharpened as detail. If this happens, switch to the Very Noise image setting and it seems to deal with it perfectly. If you would like to see an example of this together with the first image being sharpened, watch the following video.

I’m extremely impressed with Topaz Sharpen AI, and it’s become my go to tool for sharpening problems. With respect to my film scans I now think it’s essential to use Sharpen AI on them. It’s certainly cheaper than buying a new scanner (if you can find a good one).

The most important point to remember when using Topaz Sharpen AI is to pick the sharpening mode and image type first. After finding the best combination the Auto option for the “Settings” you should produce a good result most of the time.

If you have never tried Topaz Sharpen AI do download the trial version (affiliate link). I think you will be surprised by what it can achieve.

An alternative to Topaz Sharpen AI, is the Nik Collection from DxO which includes the effective Sharpener Pro. This tutorial including two video explains how to use the Sharpener Pro plugins.