How to Adjust Levels in Photoshop

In this tutorial I’m going to explain how to adjust levels in Photoshop, but you can apply this to many other editing tools. In fact, when you watch the video, you’ll find it also demonstrates the Levels adjustment in Capture One and Affinity Photo. That’s because the Levels adjustment is a common tool shared by many photo editors.

Once you learn how to Adjust Levels in Photoshop, you can transfer that knowledge to other editing software.

Before you can understand how to adjust Levels in Photoshop, you first need to understand image tones in relation to photo editing. The tones in an image as we use them ignore colour. Instead they consider how light or dark areas (or individual pixels) are.

An alternative system used by some photo editors like Affinity Photo is the percentage of white in the tone. When an image tone is 0% it’s black because there’s zero white present. But a value of 100% is pure white. Again, any values between 0% and 100% produce grey.

You can see the two systems in the illustration below. 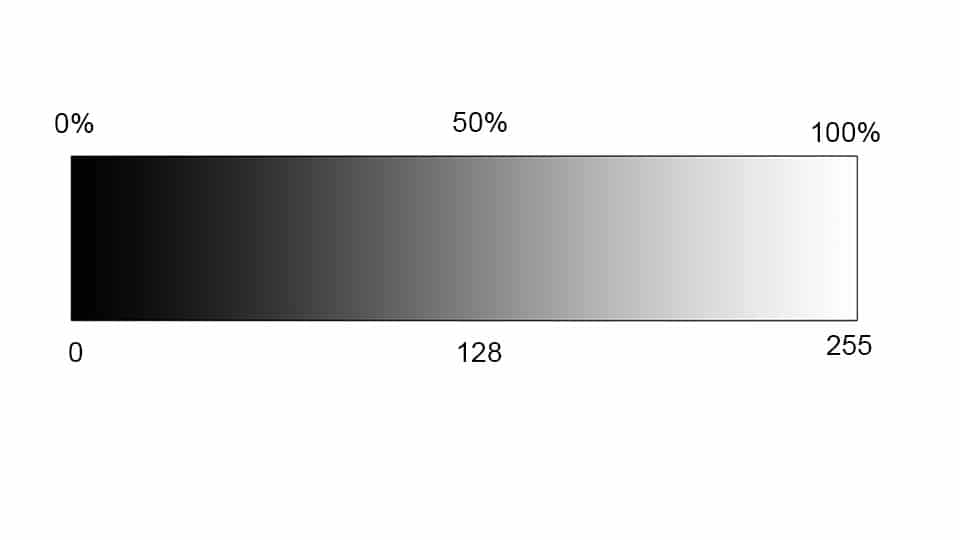 Now that you understand image tones, let’s look at how to use this in Photoshop when making a Levels adjustment. You can see the Photoshop Levels adjustment in the following screenshot showing the Properties window. Depending on the version of Photoshop you’re using, this may look slightly different. 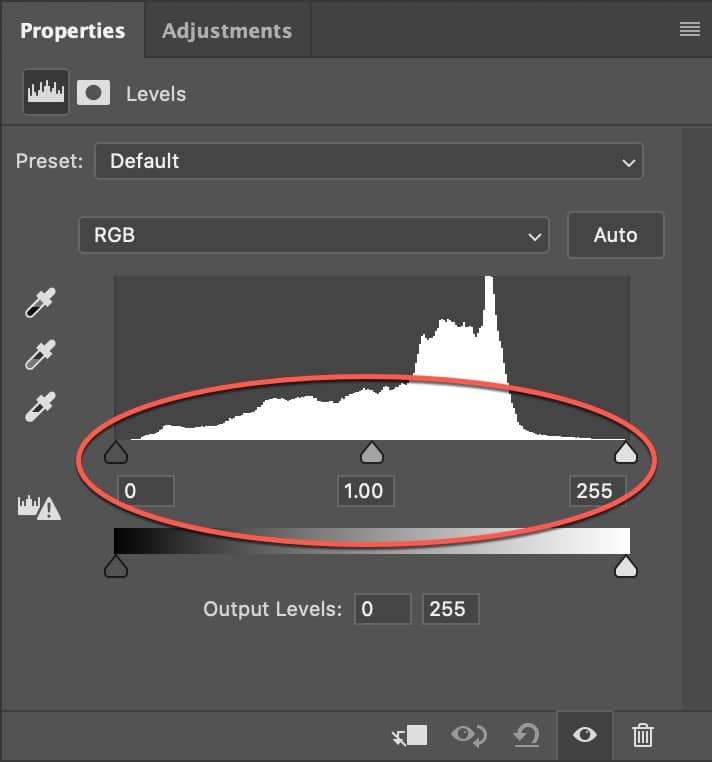 In the Photoshop Levels dialog, you can see a histogram showing the tones in the image.

The histogram shows the distribution of tones across the image from black on the left to white on the right. Just below the histogram, you can see three-pointers and just below this a box with numbers. These are the Photoshop Input Levels which we can use to adjust the image tones.

The Photoshop level on the left which has the number 0 below it is the Black Level. On the opposite side of the scale, we have the White Level with a value of 255. You’ll recognise these values from image tones we covered above.

In the centre we have the Photoshop Midtone Level, which has a value of 1 below it. This represents the brightness of midtone grey and uses a slightly different numbering system.

If you look over to the right side of the histogram, the same is true. The histogram doesn’t extend to meet the White Level. This tells us that there aren’t currently any white tones in the image. Instead, we have light grey

How to Adjust the Levels in Photoshop

Because the image doesn’t have any black or white, only shaded of grey, it will lack contrast. It’s said to appear flat. This may, of course be ideal for some images, for example, a photo of a foggy scene would be low contrast. But if you decide you need to correct the contrast you can apply a levels adjustment in Photoshop.

To Adjust the levels in Photoshop, you should first add a Levels Adjustment Layer. You can do this by selecting “Layer | New Adjustment Layer | Levels…” from the Photoshop menu. The reason we apply the Levels adjustment as a new layer rather than directly to the image is that it’s non-destructive.

With the new Levels Layer added to the image you can see the Levels dialog. We’ll now adjust the Black and White Input Levels.

Start by dragging the Black level right, to move it towards the centre. As you move the Black Level you will see the image become slightly darker. You want it to just meet the left side of the histogram but without cutting into it. If you cut into the histogram it causes something called clipping. This is when the dark image tones turn black and it can damage shadow detail in the image.

You now need to repeat step 2 but using the White Level. Click and drag the white level to the left until it just meets the right side of the histogram. As you do this you will notice the image becomes brighter and the contrast increases.  Again, try to avoid cutting into the histogram as it causes highlight clipping. 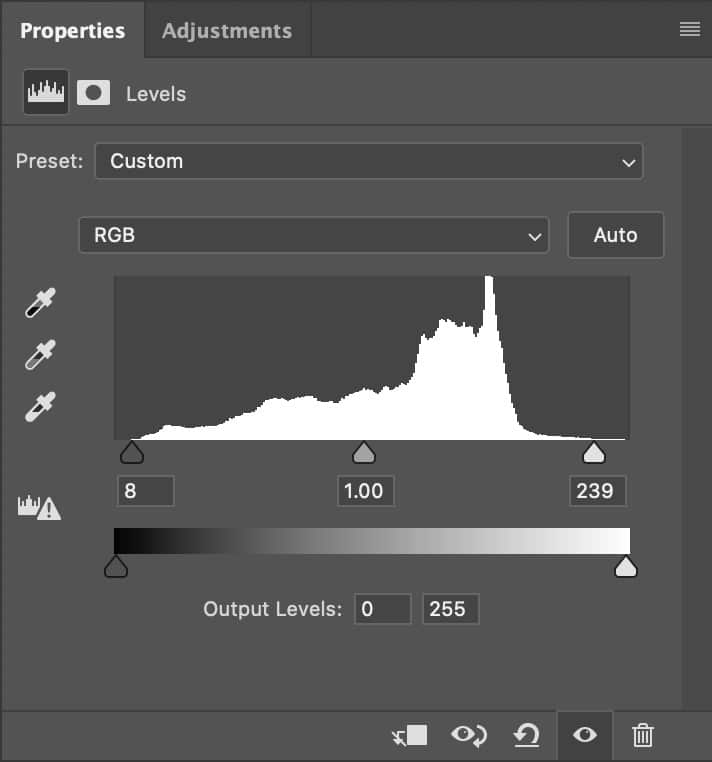 If you look closely at the screenshot, you’ll see that the black level has a value of 8 below it.

This tells us a few things:

We see a similar thing if we look at the White Input Level:

Previously the image had a tonal range of 8 to 239. By changing the Input Levels in Photoshop, the new tonal range is 0 to 255. This adds contrast to the image to prevent it from looking flat.

If you look at the Levels dialog, you will notice a second strip with sliders along the bottom of the dialog. As with the Input Levels that we’ve been adjusting, this strip has a Black Level on the left and a White Level on the Right. Below this, you will see the words “Output Levels” followed by two numbers. 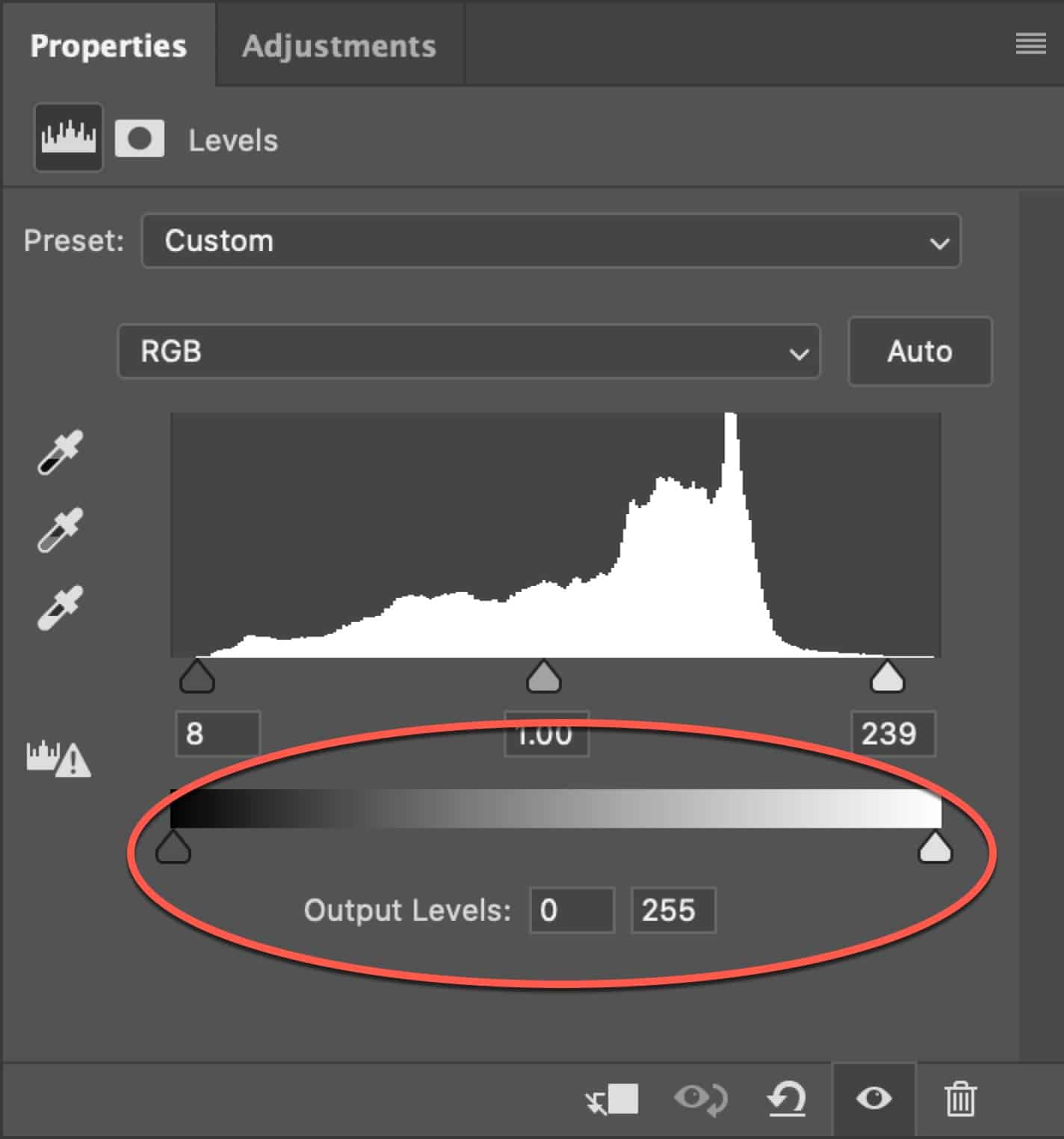 What’s happening is that the Black Output Level controls how dark the darkest tone in the image can be. When it’s set to 0 it’s saying the darkest tone can be black. If you move it to the right to say 30, Photoshop restricts the darkest image tone to be 30, or dark grey.

The White Output Level does the same thing except that it limits how bright the lightest image tone can be. The default level is 255 or white, but if you move it to the left it restricts the brightest tone to be grey.

If you’re new to using the Photoshop Levels adjustment, this can be a little confusing. Do persevere though because it’s worth the effort. To help understand what’s happening, I’ve produced the following video covering Photoshop and a couple of other photo editors.

We’ve now covered the Input and Output levels. If you’ve followed along by editing an image you should understand how to adjust Levels in Photoshop. But there is one level, the Midtone Input Level, that we haven’t covered.

The Midtone Input Level controls the distribution of tones in the image. When you move the Midtone level to the right, a greater proportion of the image tones appear to the left of the Level. This causes the image to become darker.

If you move the Midtone Level to the left, a greater proportion of the image tones appear to the right of the level. This causes the image to become lighter.

There’s nothing more complicated about the Midtone Level than this. Use to make the image lighter or darker, but only after you’ve set the Input and Output Levels.

If you’ve been confused by how to adjust Levels in Photoshop, this article should have cleared up a few things.

Start with the Black and White Output Levels. These set the darkest and lightest tones in the image. Most of the time you will want these to be black and white, but not always.

Next set the Black and White Input Levels. Use the histogram in the Photoshop Levels dialog to guide you but also consider the image. If you add lots of contrast to a foggy image it will look wrong.

Finally, set the Midtone Input level to control how light or dark the overall image appears.

Follow these guidelines and you should get good results when adjusting Levels in Photoshop.

This tutorial is one in a series of video tutorials explaining tools that you will find in different photo editors. If you would like this tutorial, you might also like the next in the series that explains how the curves tool works.