In this tutorial we’ll be looking at the Photoshop Content Aware Scaling tool to help you understand:

We’ll be using Photoshop CC 2019 so if you’re using a different version, you may see small differences in operation.

The content aware scaling tool helps us change the size of an image without distorting the main elements in the scene. The easiest way to understand how you can use this is with an example.

Below is a screenshot showing a panoramic sunrise image open in Photoshop. 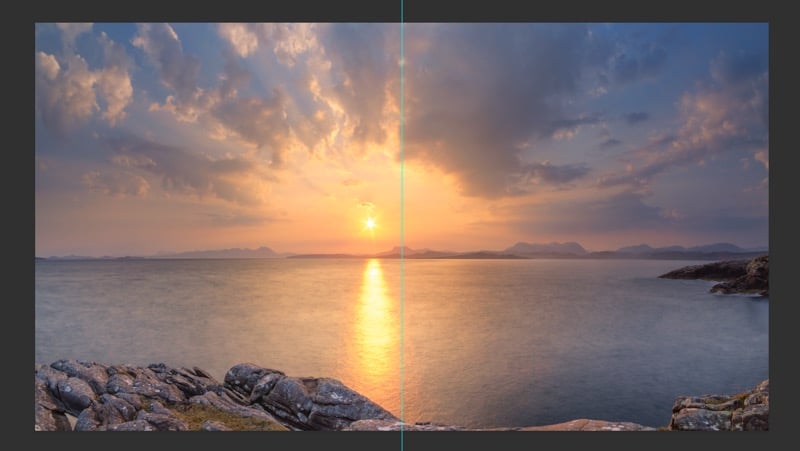 The vertical line is one of Photoshop’s guides which shows the centre of the image. Ideally, the sun in this image would pass through the centre but it doesn’t. You could of course crop the image to remove part of it on the right side, but this would shorten the panoramic which we don’t want.

The alternative approach is to use Photoshop’s Content Aware Scale tool to stretch the left side of the frame. If we stretch it enough, the sun will then appear in the centre of the frame.

Before we can apply Content Aware Scaling to do this, there are a couple of things we should do.

There are a couple of ways to extend the canvas but the easiest is using the Photoshop Crop Tool, found in the Tools Palette. When you select the Crop Tool, be sure to clear any cropping ratios or sizes already set in the Context Sensitive Toolbar.

Once you’ve done this, set the crop area to exactly cover the image. You can then drag the left edge of the crop further to the left so that it extends beyond the edge of the frame. Extend this far enough to allow the sun to appear in the centre of the crop as shown in the screenshot below. 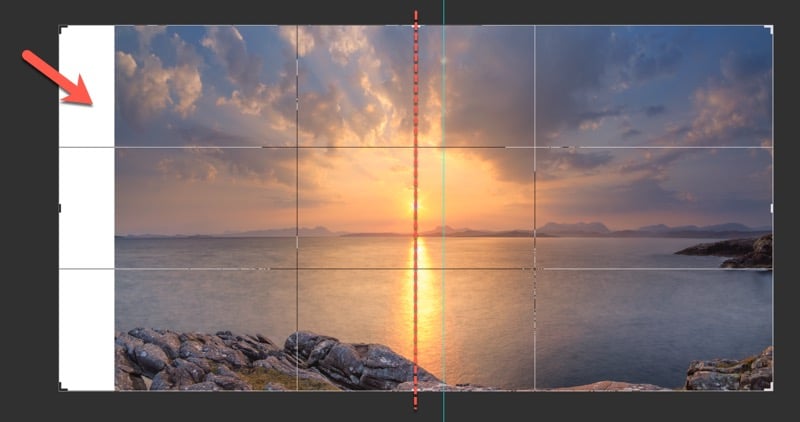 Here you can see the new canvas area on the left of the image. Once you’re happy with the size, click the tick mark icon in the Context Sensitive Toolbar to apply the change.

Let’s now look at selecting and scaling the image.

We first want to select the area of the image to stretch or scale. In this image, we’ll use the Rectangular Marquee tool found in Photoshop’s Tools palette. Its icon looks like a dotted square.

With the Rectangular Marquee Tool selected, click and drag out a selection. When you release your mouse button you will see the marching ants around the selected area. You can see a suggested selection in the Screenshot below. 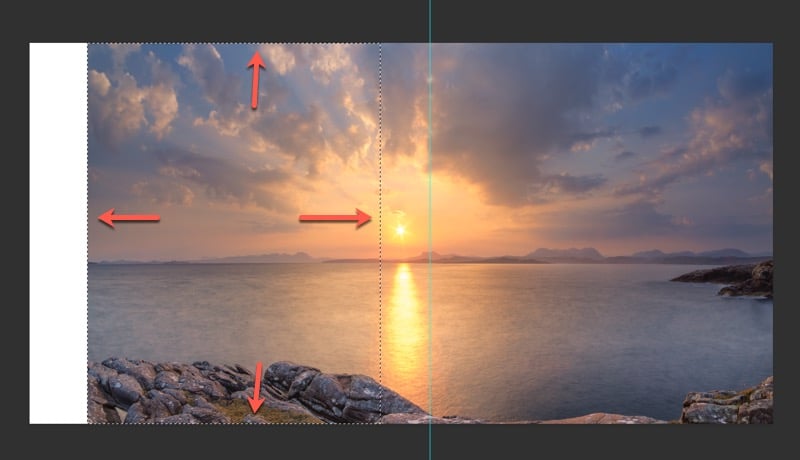 Notice how the selection is around the edge of the image (not the canvas) but stops short of the sun. This allows us to stretch or scale the left side of the image without affecting the sun.

In the Photoshop menu select “Edit | Content Aware Scale”. You will then see “handles” appear (small squares) on the corners and edges of the selection.

Click on the handle in the middle of the left-hand edge of the frame and drag this to the left. As you drag the edge left you will see the selected area is resized. You will also notice this changes the height of the selection.

The best way to reset the height without affecting the width of the scaled area is to first drag out the width. Click the link icon in the Context Sensitive Toolbar to unlock the constraint on the aspect ratio. You can then reset the Height box in the toolbar as you can see it indicated in the screenshot below.

When you’ve correctly resized your selection, click the tick icon on the right of the toolbar. Photoshop will then scale the content but avoid stretching out the clouds and rocks. It will automatically recognise these objects as content and try to maintain their proportions. Instead, it will find and stretch areas that don’t have any detail. You can see the difference when you compare the results to using the Transform tool which we look at next.

Let’s repeat this exercise but using the Transform tool. To do this you would still select the part of the image with the Rectangular Marquee Tool as you did before. Be sure that you have the correct layer selected in the Photoshop Layers Window before doing this, then select “Edit | Transform |Distort” from the menu.

When you apply the transform tool to this you will see some elements of the frame have become stretched, which didn’t happen with the Content Aware Scale tool.

You can see the two versions below. First is the Content Aware Scaling. 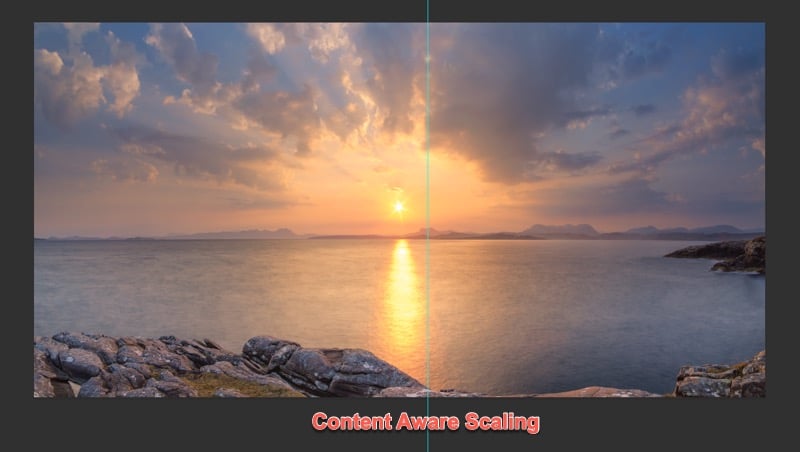 Next is the regular Transform tool. 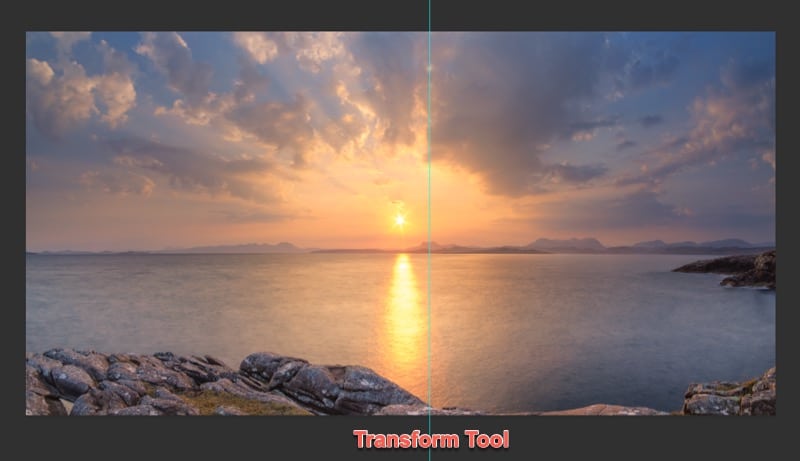 The difference is most noticeable in the rocks in the foreground where the Transform tool’s stretched.

As great as this appears, there are some problems with artefacts when using the Photoshop Content Aware Scaling tool. If you want to know more about what to look out for as well as see both methods demonstrated, I’ve produced this short YouTube video.

The Photoshop Content Aware Scaling Tool is very useful, but it doesn’t produce great results with all images. Be sure to check the details of the scaled image carefully for problems. It’s also worth comparing the results with the regular Transform tool. The old Photoshop tools may just work better with some images.

If you liked this tutorial, please help me by sharing it with others. You can use the sharing buttons on the left of the screen and below.