How to Create and Use the Orton Effect

The Orton Effect is a very popular technique among landscape photographers. When used correctly it creates a dreamy feel in photos whilst retaining important detail. In this tutorial we look at how you can create the Orton Effect in your photos. But importantly, we also look at how to apply it.

The Orton Effect gets its name from Michael Orton who developed and used it to great effect in the mid 1980’s. At the time he created the effect by blending multiple exposures shot on slide film. If you’ve ever tried this, it’s incredibly hard to do well. Fortunately, we now have lots of digital alternatives that make it much easier to create.

If you’re feeling a little unsure whether you’ve seen the Orton Effect or not, I can assure you that you have. It’s now used extensively by lots of landscape photographers, especially those shooting woodland and misty conditions.

There are many ways to create the Orton Effect, each with its own look. Which is best for you depends on the editing tools you have available as well as your skill with these. To cover most possibilities, we are going to explore Photoshop first followed by a couple Plug-ins. If you are using Affinity Photo, you should be able to follow the Photoshop instructions.

The Orton Effect in Photoshop

Start by editing your photo until it looks the way you want it to but without the Orton Effect.

Next create a Stamp Layer to consolidate all the editing layers into a single new layer. You can do this by clicking the top layer in the Layers Window. This selects the layer after which press Shift + Option + Cmd + E on your keyboard. If you’re using a Windows PC press Shift + Alt + Ctrl + E. You should see the new consolidated Stamp Layer appear in the Layers Window. 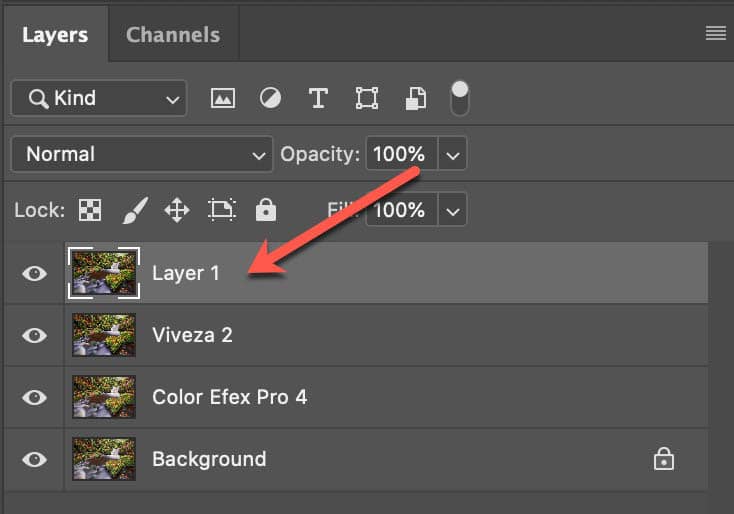 Duplicate the new layer by selecting and pressing Cmd + J on your keyboard or Ctrl + J on a Windows PC. We will need both layers. One to create the blur or glowing effect and the other to sharpen detail.

Click the new duplicate layer that should be at the top of the Layers Window to select it. We are now going to blur the layer using the Gaussian Blur filter. Select the filter using “Filter | Blur | Gaussian blur…” in the Photoshop menu.

When the Gaussian Blur dialog displays, set the blur Radius. A good starting point to use is the megapixel count of the camera used. 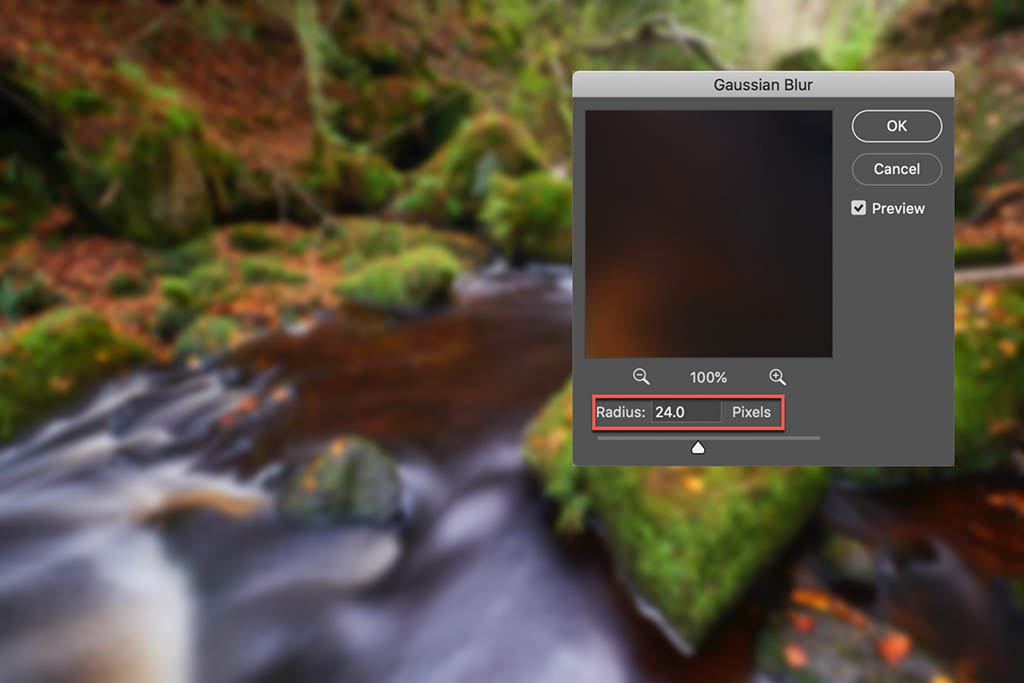 Having blurred the layer, we need to increase the contrast using a Levels adjustment. We will apply this as a clipping mask layer so we can adjust later if needed.

In the Properties window you can move the black and white levels inward to increase the contrast (as well as cause clipping). Optionally you can also adjust the midtone level. 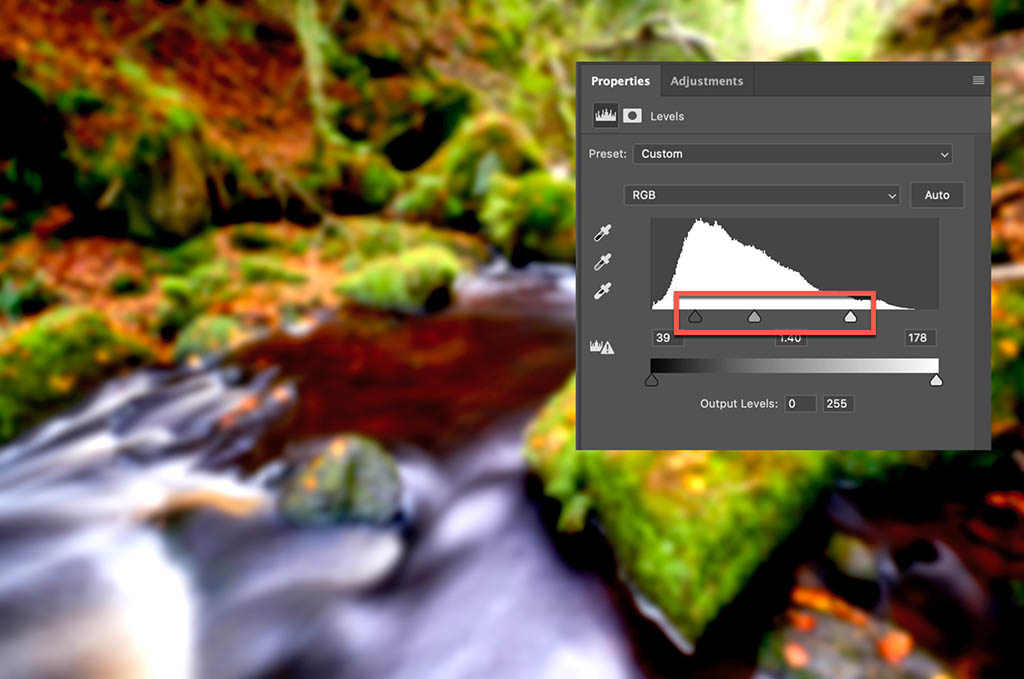 Now we need to work with the other layer we created to bring back detail in the image. Click the to select it, then drag it to the top of the layers window. This hides the blurred layer and Levels adjustment you’ve been working with. 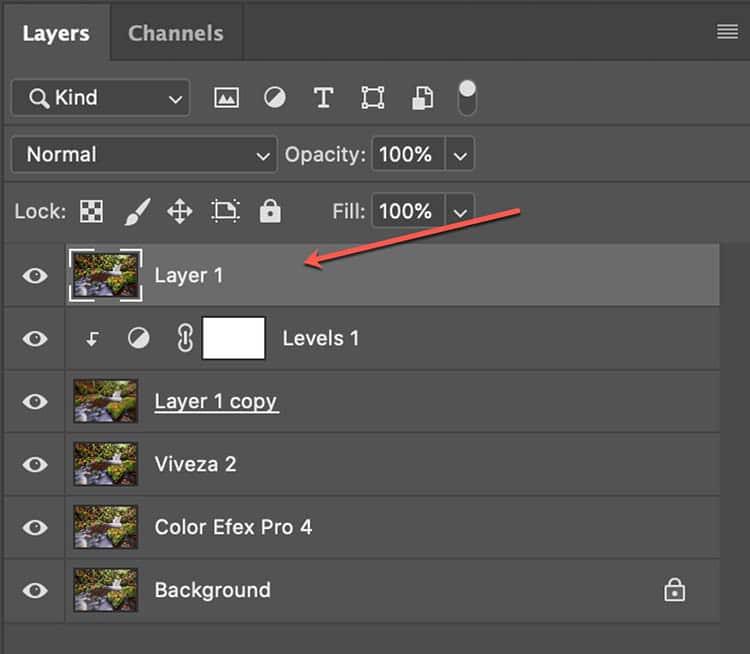 Apply a High Pass filter to the layer by selecting “Filter | Other | High Pass…” from the menu. This will make the image look odd but don’t worry.

Adjust the radius setting in the High Pass dialog so you can clearly see the fine outline of objects. A setting of between 2.5 and 3.5 is usually enough.

Apply the High Pass filter then change the blending mode from Normal to “Soft Light” in the Layers Window. 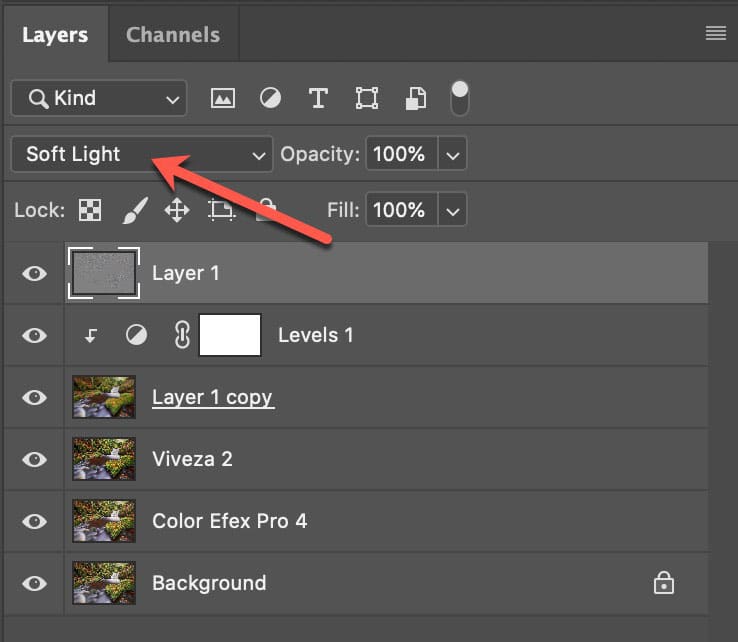 The glowing effect will now return but the detail in the image is stronger. You can now refine the strength of the effect.

There are several ways you can adjust the Orton Effect created with this method:

If you want an easier way to create the Orton Effect, it may be best to turn to a Photoshop “plug-in”. Although we call these plug-ins, many are standalone photo editors where you don’t need Photoshop. Two such editors are On1 Photo RAW (affiliate link) and Luminar from Skylum (affiliate link).

In the following video, I demonstrate the Orton Effect in both, testing them head to head to see which I think is best.

Now you understand how to create the Orton Effect, we need to talk about how to use it. Be aware that the Orton Effect has become somewhat overused recently. Consequently, it’s getting a bad reputation, just like HDR did when that technique became popular. There are a few reasons for this:

The two photo editors (On1 Photo RAW and Luminar) mentioned above both include a masking feature to do this. If you’re editing in Photoshop you will need to work with Layer Masks.

Ideally, the best approach is to paint through a selection created using a Luminosity Masking tool. This is an advanced editing technique but there’s a free Photoshop Panel (Interactive Luminosity Mask) to help. You can watch me demonstrate the tool in the following video.

You can learn more about powerful Photoshop luminosity masking techniques in my video courses.

We’ve covered a lot of ground in this tutorial. If you’ve followed along, you should now be able to create and add the Orton Effect to your photography.

When using the Orton Effect, do keep in mind the advice that less is often more. You don’t want the effect to become obvious and recognisable. I would also encourage you to apply the effect selectively, ideally through a luminosity section. Target it onto the midtones and highlights for the best impact.