In this tutorial, we look at four Nik Collection filter you can use to make the details in your photos pop. You’ll find all four of these detail enhancing filters in Nik Color Efex Pro. But the most remarkable thing about these filters is that the work without sharpening. You can enhance and make your photo details pop just by using these any of these four Nik Color Efex filters.

If You Don’t Have the Nik Collection

If you don’t have the latest version of the Nik Collection you can download a 30-day free trial from the DxO Nik website.

To demonstrate the four detail enhancing filters and their effects, I’ll be using this mist, bad weather image. 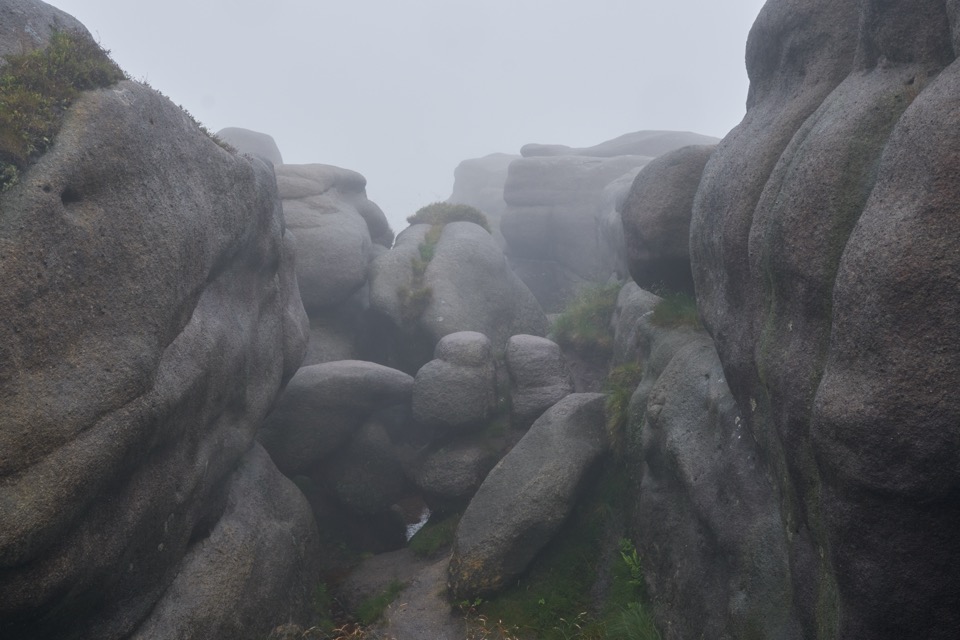 We’ll apply the four Nik filters to make the foreground rock detail pop in the photo but without harming the mist. The four filters are:

And whilst all these filters will make the details in your photos pop, they each produce a different result.

Let’s get underway with the Detail Extractor filter.

The Detail Extractor is probably the first filter most people think about when wanting to make photo detail pop.

To use the filter, open your image in Nik Colour Effects Pro.

On the left side of the interface choose the “All” option in the Filter Library. This displays a list of all the filters in Nik Color Efex Pro in alphabetical order. Then select the Detail Extractor filter from the list. 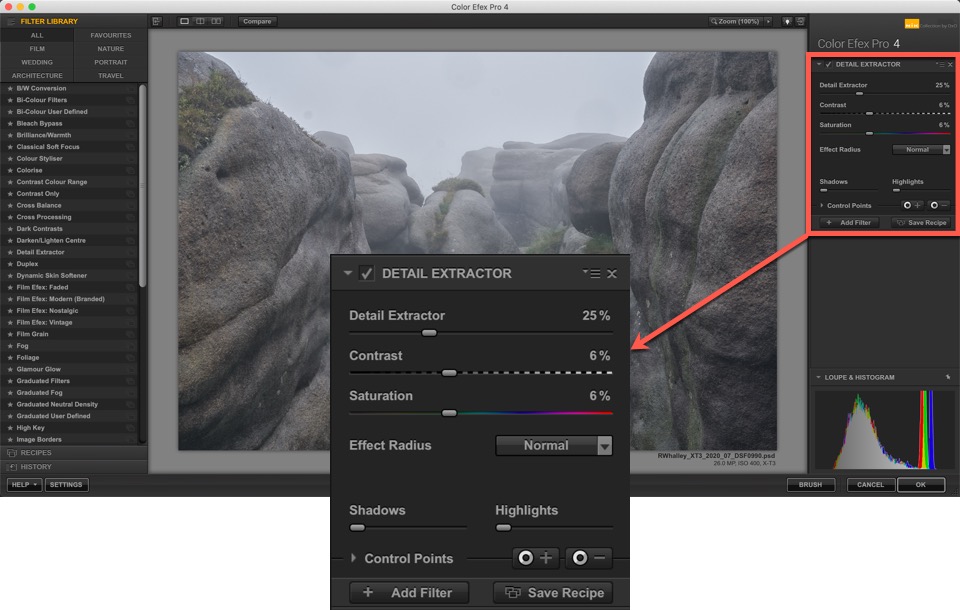 The main control to set the level of detail enhancement is the Detail Extractor slider. But what you may not realise is that even when this slider is at 0, the filter still enhances the detail in your photo. With some photos you may find this is enough to make all the details pop, so please check this first. Also, don’t just use the default settings. To get the best results with this filter it’s necessary to fine tune the adjustment.

The next control to be aware of is the Effect Radius drop-down. You can use this to choose how you want to apply the detail enhancement. You can choose setting of Fine, Normal, or Large details from the dropdown.

Although it’s tempting to pick the Fine Effects Radius, do check the others.

Using a strong Detail Extractor setting with a Fine radius often produces a false, unnatural looking effect. You may find it better to use a large radius as this tends to produce more natural results with strong adjustments.

How the Detail Extractor Filter Works 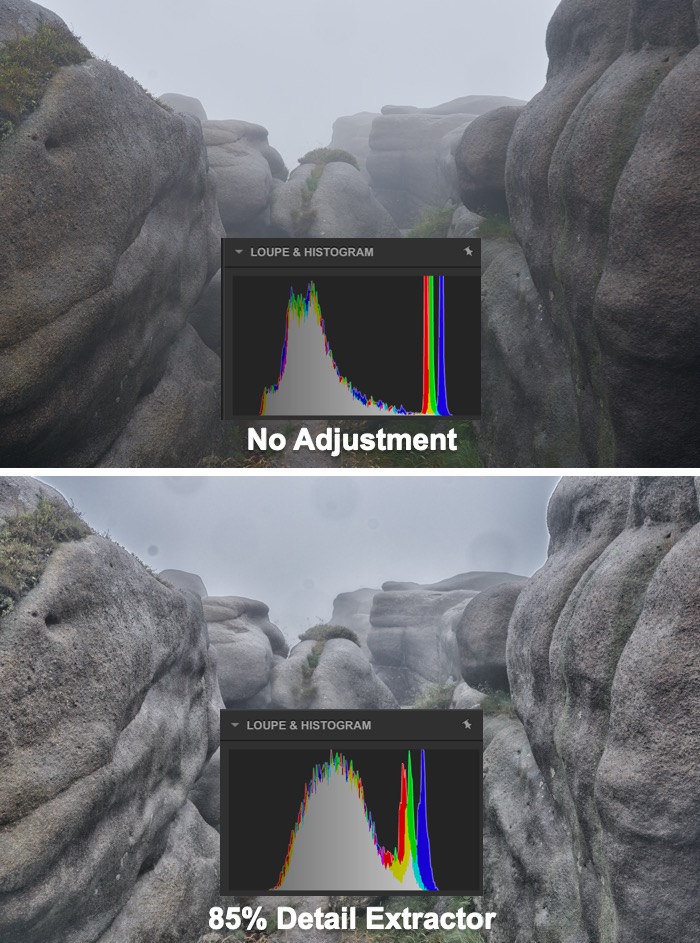 When you apply the Detail Extractor filter in Nik Color Efex Pro, it enhances the midtone contrast in the image. But it does this at the expense of some shadow and highlight tones. Notice how the histogram now gathers into the central area or midtones. The filter has also lightened the darkest tones and darkened the lightest tones in the image. This reduces the image contrast even though it increased the midtone contrast.

To correct the problem, the Detail Extractor filter provides a Contrast slider. Increasing this it will darken the darkest tones unlike the lightest tones in the image. This will move the histogram out at either end whilst not affecting the midtones much.

The other thing you may notice with some images is that colours can suffer. You may need to improve their vibrancy using the saturation slider.

Do remember the Detail Extractor filter is quite an extreme detail enhancing filter. Whilst it’s excellent for making photo details pop it can have unwanted side-effects. Two that you may notice are:

Using Control Points with the Filter

One way to address this (other than keeping your lens and sensor spotless) is by using Control Points. You can then limit where the Detail Extractor applies to the image. It’s always a good idea to remove any detail enhancement from areas of smooth, continuous tone like the sky and water.

In our example photo, we could apply negative Control Points to the central part of the sky to remove the effect from that area. Here’s the before and after view. 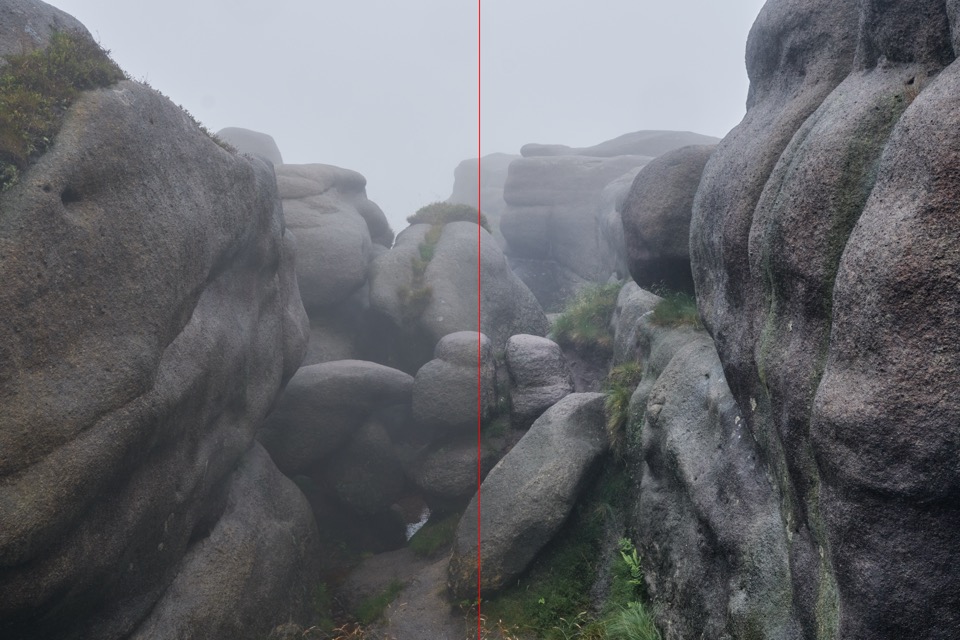 Notice how the filter makes the rock detail in the photo pop so that it’s easier to see.

Now let’s look at our next filter, the Pro Contrast Filter.

The Pro Contrast filter is another great filter for making photo details pop. You can see a close-up of the filter controls below. 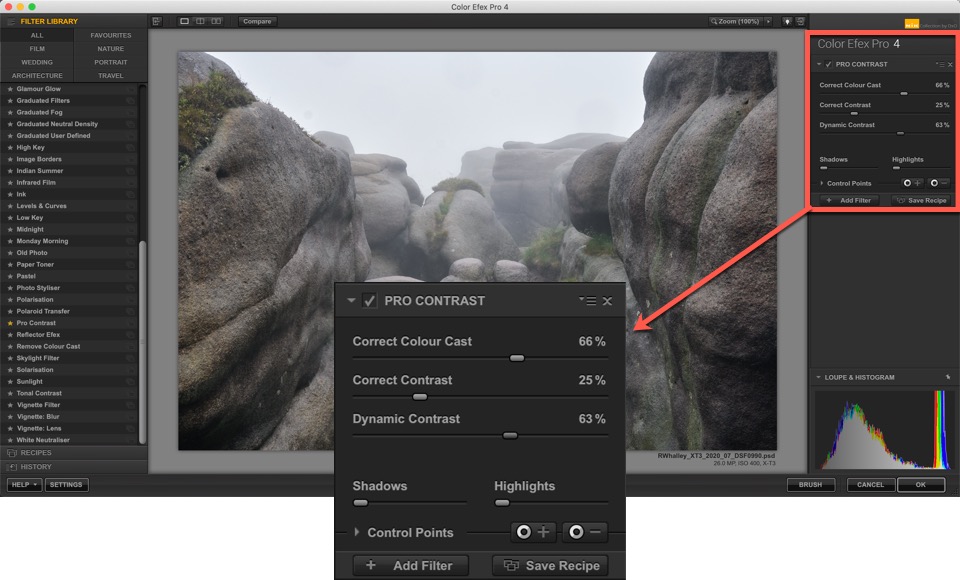 There are three slider controls in the Pro Contrast filter in Nik Color Efex Pro. The one to apply to make your photo details pop is the Dynamic Contrast slider.

How the Pro Contrast Filter Works

The Dynamic Contrast slider works like the Detail Extractor we looked at earlier. It enhanced the midtones in the image, drawing the histogram into the centre. This has the effect of spreading out lighter tones which makes it easier to see detail. Similarly, when applied to shadow tones it can open shadow areas to reveal detail. But unlike the Detail Extractor filter, the Pro Contrast filter doesn’t change the darkest and lightest tonal points.

The other slider in this filter is the Correct Colour Cast slider. Whilst this doesn’t help to make your photos pop, it’s an extremely useful slider for correcting colours. You may find any colour cast in your photos is easier to see after applying the Pro Contrast filter.

We can use the Correct Colour Cast slider with the example image to remove the cold feel on the foreground rocks.

Using Control Points with the Filter

As with the Detail Extractor filter, you should use Control Points to remove the detail enhancement from any areas of continuous tones like the sky. Applying the Pro Contrast filter to areas like the sky in this photo causes any noise in that area to become exaggerated and often easy to see.

Here’s a split screen view showing a before and after view using the Pro Contrast filter to make the rock details pop. 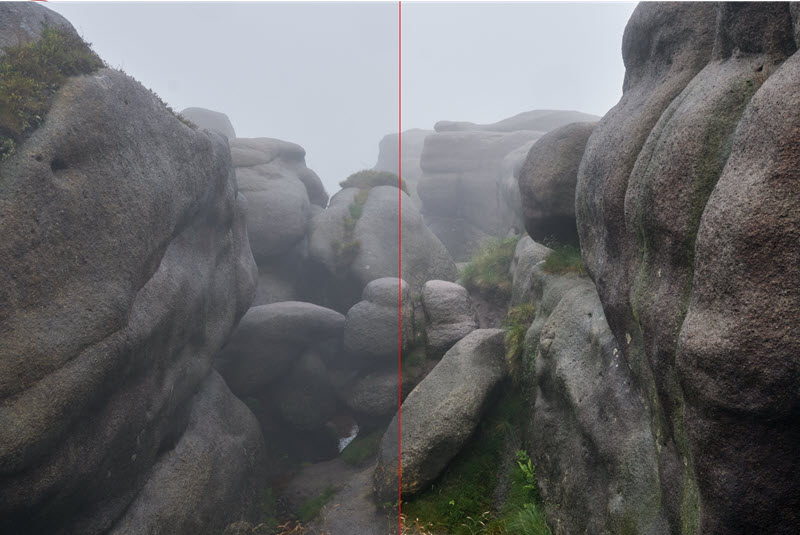 Bleach Bypass is a traditional fine art technique that’s made its way into the digital world. You can see an example of the filter, together with a close-up of the settings, below. Although the effect is extreme in this example you can see how much difference it makes to the rock details in the photo. 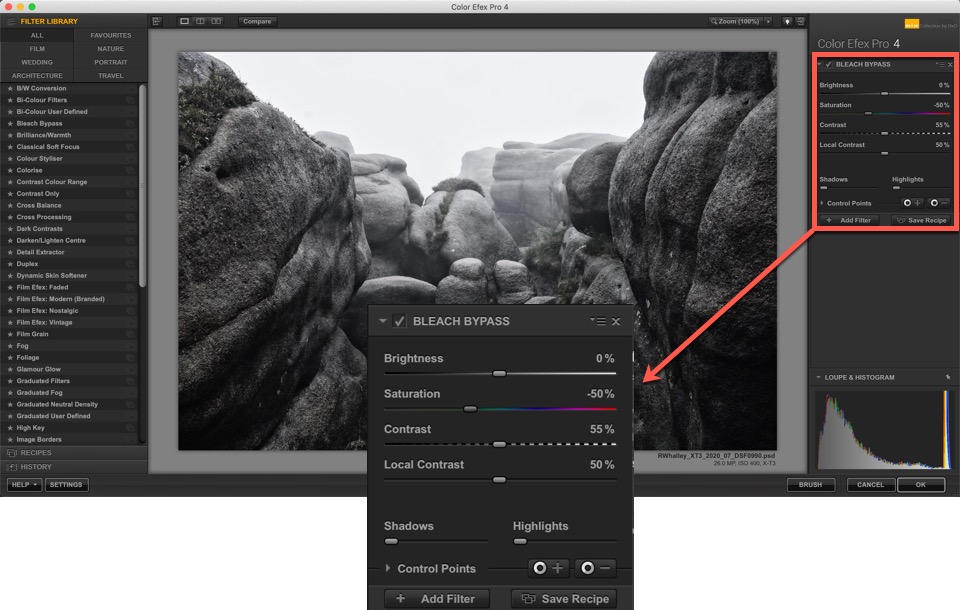 If we are to use the Bleach Bypass filter to make the details in a photo pop, we first need to set the adjustments to 0 for all the sliders. This allows us to see what’s happening when we apply the detail enhancement.

We can use the Local Contrast slider to make the details in the photo pop. As with the other slider’s this tends to enhance the midtone contrast, allowing the detail in shadows to become clearer. But you may find this causes the image to lack contrast. If it does, use the Contrast slider to correct the problem.

Another side effect when using the Bleach Bypass filter to enhance photo details is that it removes saturation. You can fix this to some degree using the Saturation slider in the filter, but it has a limited positive adjustment.

If you find you can’t increase the saturation enough, try adding a new “Brilliance/Warmth” filter from the Filter Library in Nik Color Efex Pro. You can then use the Saturation and Perceptual Saturation sliders for that filter to fully correct the saturation levels of the image. You can see the filter below. 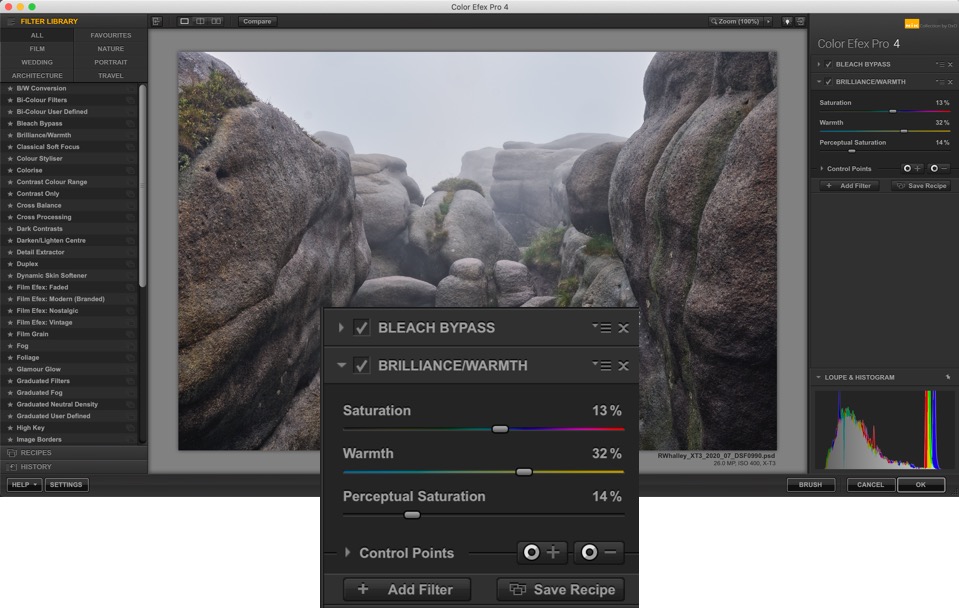 In this example, an element of Warmth the filter was used to add an element of warmth to the foreground rocks. The warming effect was removed from the sky using Control Points. You can see the before and after comparison below using the split-screen mode. 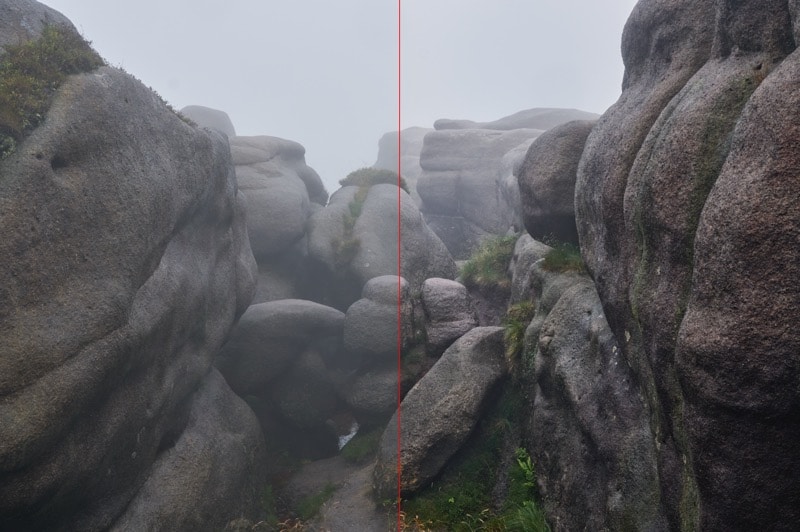 Now let’s look at the final filter we can use to make the details in this photo pop.

We can use the Contrast Only filter to apply contrast to an image without affecting the colours. But it also has a couple of other Contrast adjustment controls that are helpful including regular Contrast and Soft Contrast sliders. You can see the filter below. 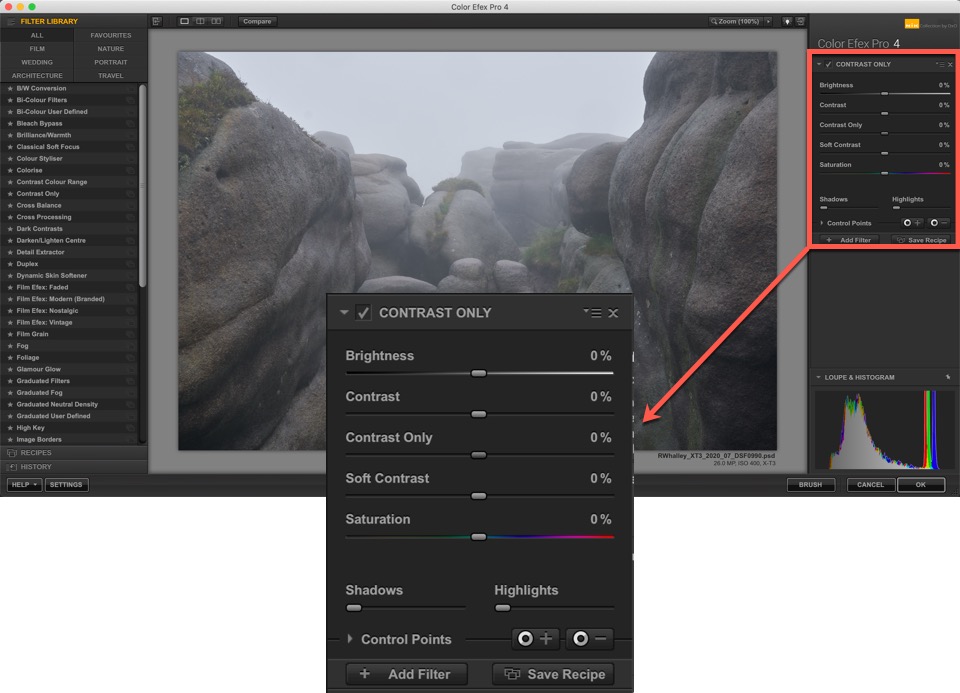 The secret to making this filter work is to use the Contrast Only slider in combination with the Soft Contrast adjustment.

Start by applying a negative Soft Contrast adjustment by moving the slider to the left. You will find this opens the shadows in the image, but it also reduces the photos contrast. You can then correct this by moving the Contrast Only slider to the right. By using these two sliders together we can enhance the rock details in the photo to make them pop.

Problems Using the Contrast Only Filter

Here’s a side by side comparison showing how this can make the details in the photo pop. 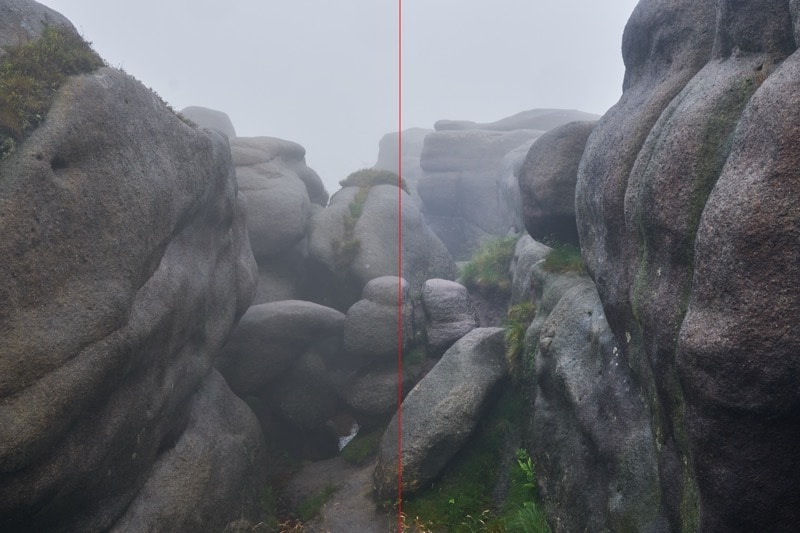 How to Make Details Pop Video

Now watch the video to see these techniques in use.

In this tutorial we’ve looked at four different filters in Nik Color Efex Pro you can use to enhance detail. Each of these can help to make photo details pop, but you must use them with care. The effects of some are quite aggressive and they can introduce unwanted problems and side effects. It’s also important when using these filters to restrict them as much as possible to areas of detail using Control Points. Try to avoid applying them to areas like the sky and water.

The other important thing to be aware of is that each filter produces a slightly different effect. Some of the filters can produce quite unnatural results (especially at higher strengths). This probably won’t suit natural subjects but could suit manmade objects like architecture. Be sure to spend a little time experimenting to see which is best for making he details pop in a photo. The results could surprise you.

I hope you’ve found this tutorial helpful. If you have, please take a moment to share it with others.