How to Create Your Own LUTs Using 3D LUT Creator

In this tutorial I’m going to explain how to create your own LUT’s using a tool called 3D LUT Creator. Some photographers have been using LUTs in their photo editing for a long time and some of the effects they can create are superb. In fact, if you’ve ever wondered how they create those great lighting effects in films like The Matrix, LUTs are the secret.

If you want to see 3D LUT Creator in action I’ve included a video demonstration later in this tutorial.

The Popularity of LUTs in Photography

Today, LUTs have made the transition from the cinema to still photography. If you look through the list of Adjustment Layers in Photoshop, you’ll find one called “Color Lookup”. This is how you apply a LUT to an image using Photoshop. It’s sometimes called Color Grading although the terms now used to mean adding all sorts of colour effects to a photo.

Where to Find Your LUTs

If you have one of the photo editors mentioned above, or your editor supports applying LUT’s to an image, you’ll probably want to find some LUT’s. In case you didn’t know, LUT’s are really a computer file with lots of information. This information tells the software how to map one colour in the image to another. It’s quite a simple idea really.

And if your photo editing software supports editing with LUTs it quite possible there are some already installed to your computer. It’s well worth exploring these before going to any more expense.

Now assuming you decide you need more LUTs, you have two real options. The first is to buy your LUTs from a third party. The other and the one we’ll look at in this tutorial is to create your own. One of the very best ways to do this is using the 3D LUT Creator software.

You can download a trial version of the software from their website. It’s fully functional but it doesn’t allow you to save the finished result as a LUT. The 3D LUT Creator website also has some LUTs you can download for free as well as a LUT store where you can purchase others.

In this example I’ll use 3D LUT Creator to edit a landscape photo. I’m also going to approach this as an editing task rather than trying to produce a special effect. At the end of the editing I will explain how to use the changes to create a LUT you can apply to another image. If you want to create a LUT to produce a special effect, the process is the same.

Start by launching the 3D LUT Creator software and open the image you want to work on. 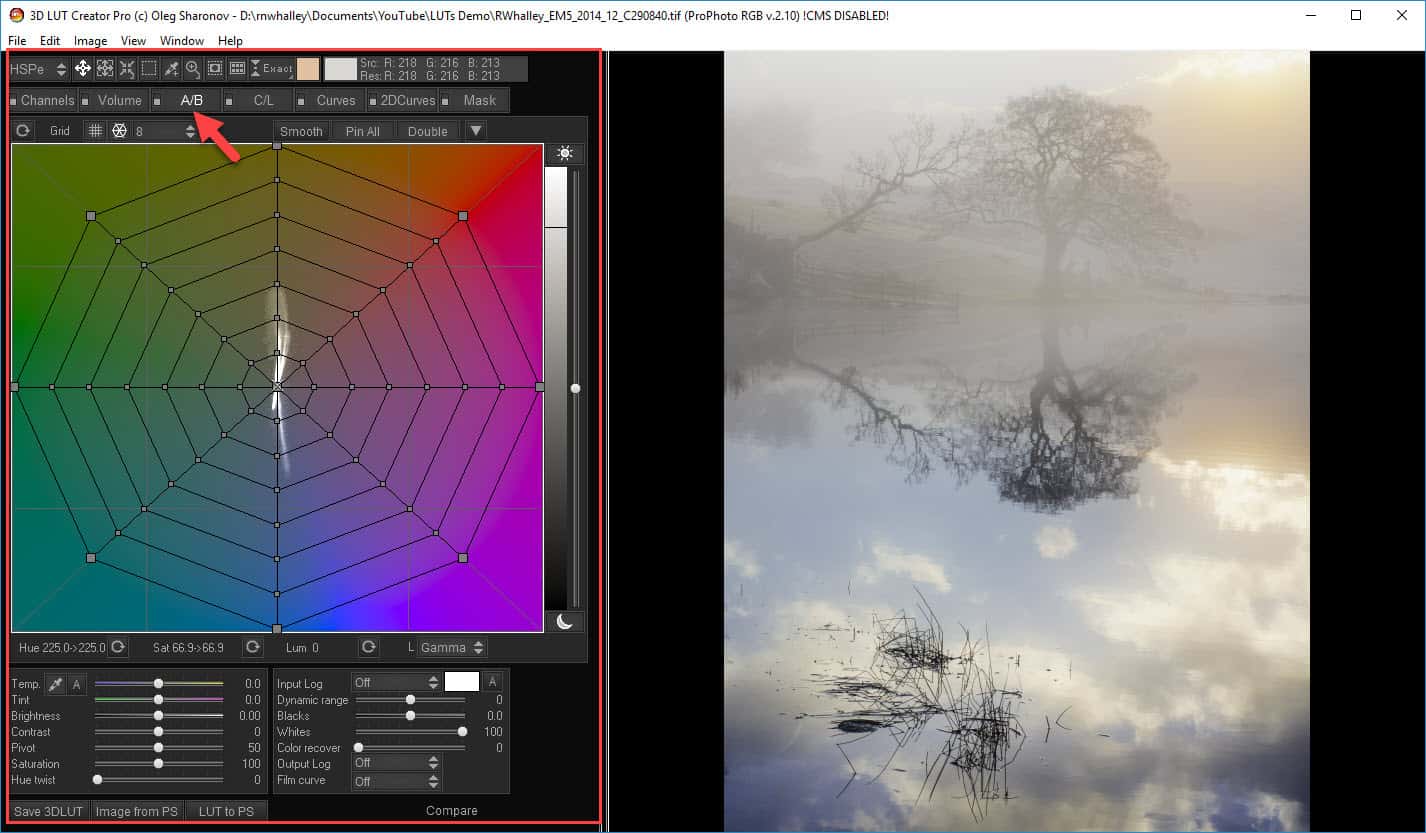 Here you can see the 3D LUT Creator interface with the image I’m using for the example.

On the left side of the interface, surrounded by the red box are the editing tools. The editing tool shown in the illustration is the “A/B Grid”. You can see the “A/B” title indicated by the small red arrow where you’ll find other tools in a dropdown menu. The A/B Grid is a very intuitive and powerful editor for remapping the colours in an image. It’s one of the things that makes 3D LUT Creator so good.

The A/B Grid looks like a spider’s web. Below the grid you have more traditional, slider-based tools that most photographers are familiar with. Separately, there’s a small Analyser floating window that displays helpful information. You can see an example of this below. 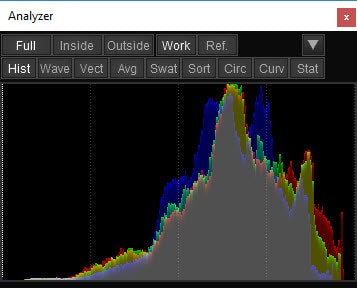 Examining the example image, it would benefit from the colours being warmer, more saturated and possibly a little brighter. I would particularly like the yellow tones in the top right of the image frame to appear more golden.

These changes are the adjustments applied to the image using the A/B Grid in 3D LUT Creator:

Temp = 10 – This slider increases the colour temperature of the overall image, moving it from blue towards orange.

Contrast = 20 – I was expecting to push the histogram out at either end when increasing the Contrast. This doesn’t seem to happen. Increasing the contrast moved the midtones and shadows towards the highlights. Based on the visual result I increased the contrast.

Pivot = 30 – I can though see the default is 50 and reducing this appears to compress the histogram into the highlights area for this image without causing blown highlights.

Dynamic Range = 10 – This adjustment limits highlight clipping in the very brightest areas where the sun is breaking through the mist. Move the slider in the opposite direction and it limits how bright the white areas appear.

Saturation = 120 – The default value of the slider is 100 and increasing it adds further saturation to the image.

If you use the “Compare” button in 3D LUT Creator, you can compare your changes with the original image. You can see a screenshot of this below. The before image is on the left and the after image is on the right. 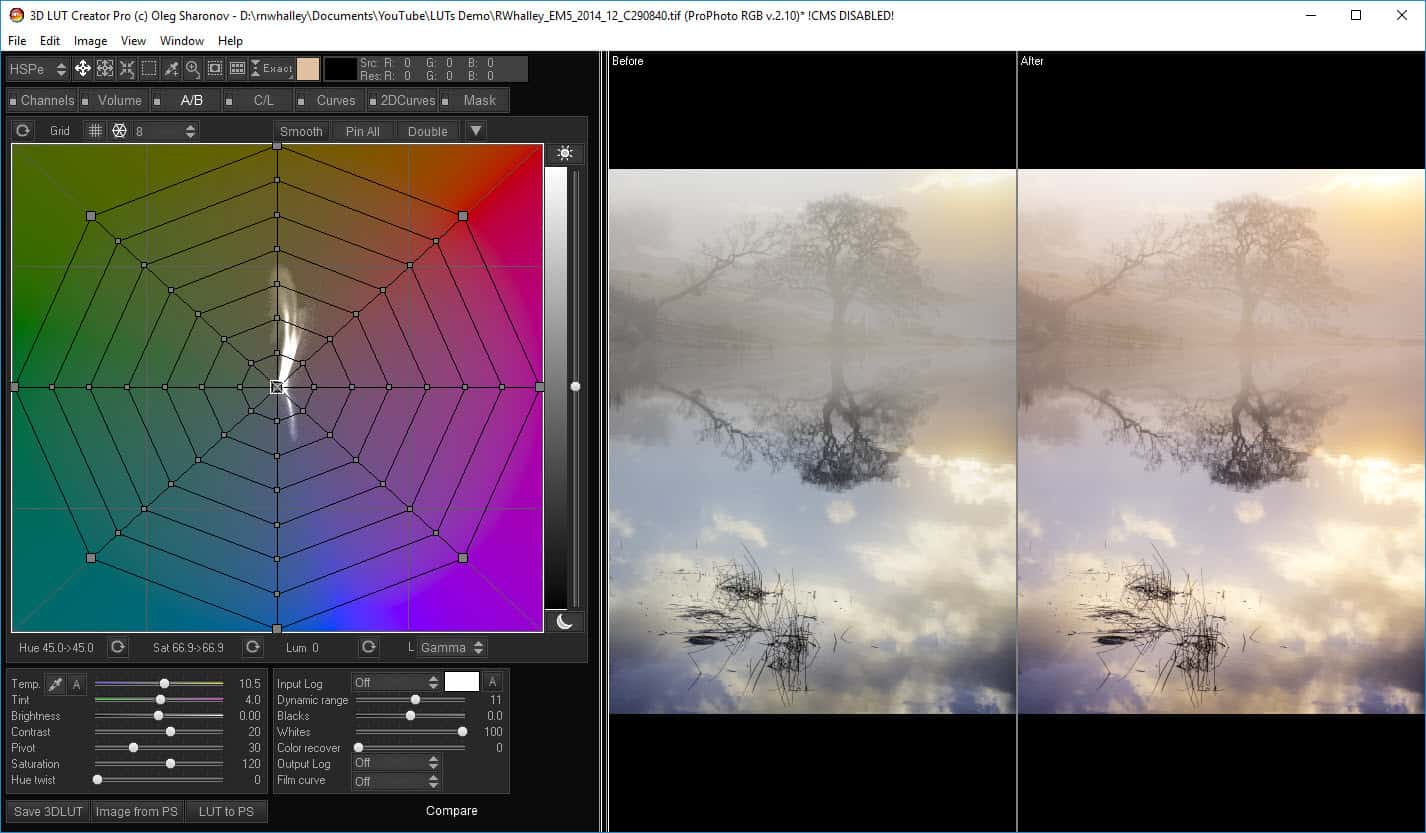 Here the image now looks more golden but there’s a colour shift in the blues causing it to look slightly purple. One way to adjust this is using the spiders web in the A/B Grid.

Adjusting Colours with the A/B Grid

If you look at the spiders’ web in the A/B Grid you can see that there is “colour wheel” behind it. The various points on the web represent the colours in the image. By clicking and dragging a point, you can remap that colour in the image to a new colour.

Be aware that when you remap a colour using the spiders web it can be quite sensitive. If you are crating LUTs for special effects, this is a great advantage, but it can make photo editing a little tricky. It can create some very interesting and bizarre effects as you can see below. 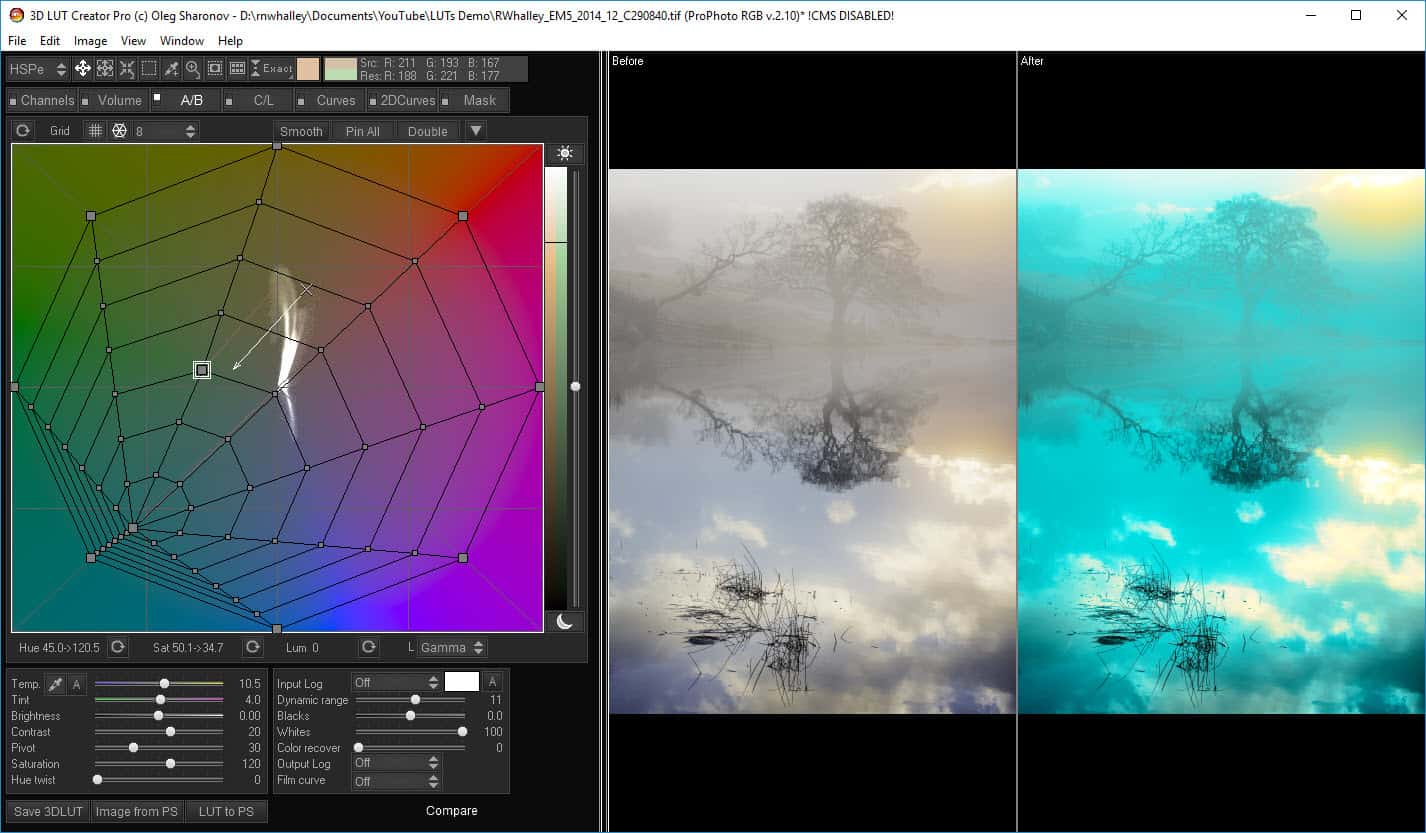 This adjustment targeted the blues in the image, moving them towards blue/green or teal.

If you make a mistake and want to reset the grid, use the reset icon top left of the 3D LUT Creator interface. Clicking this resets the grid to the original position.

If you want to undo a single change to the grid, use the “Edit | Undo” option in the menu. You can work back through the history of changes with this.

3D LUT Creator also features a much more intuitive way to make your adjustments. By clicking a point on the image, you can adjust the grid by dragging left, right, up and down. As you drag, you see the corresponding colour points on the grid move. After a short time with the software you’ll probably find this is the best approach.

In this example I’ve clicked the blue area in the centre of the frame and dragged left/down. This corrects the purple hue of the blue. It’s then possible to make the sky appear more golden by clicking and dragging left/up.

To show you how small the adjustments to the grid were, here’s a closeup of the grid. 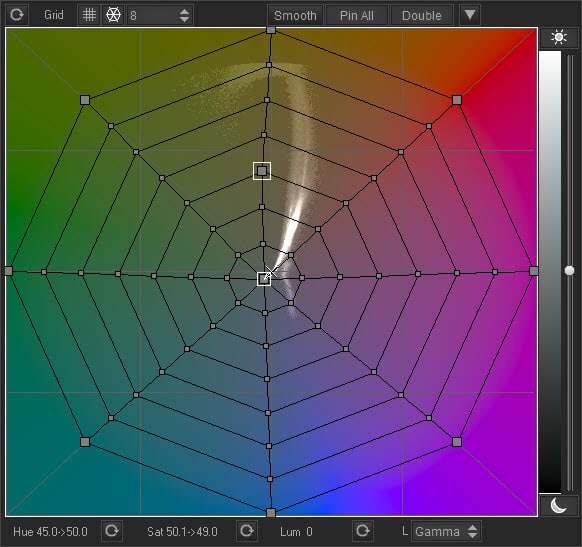 Saving Adjustments and Creating a LUT

In the following screenshot you can see the original image side by side with the adjustment applied in 3D LUT Creator. These adjustments are the ones described above but with an additional increase in the Temp slider further to 15. After this, I click the “Smooth” button to smooth out the image tones and make the adjustment more natural. 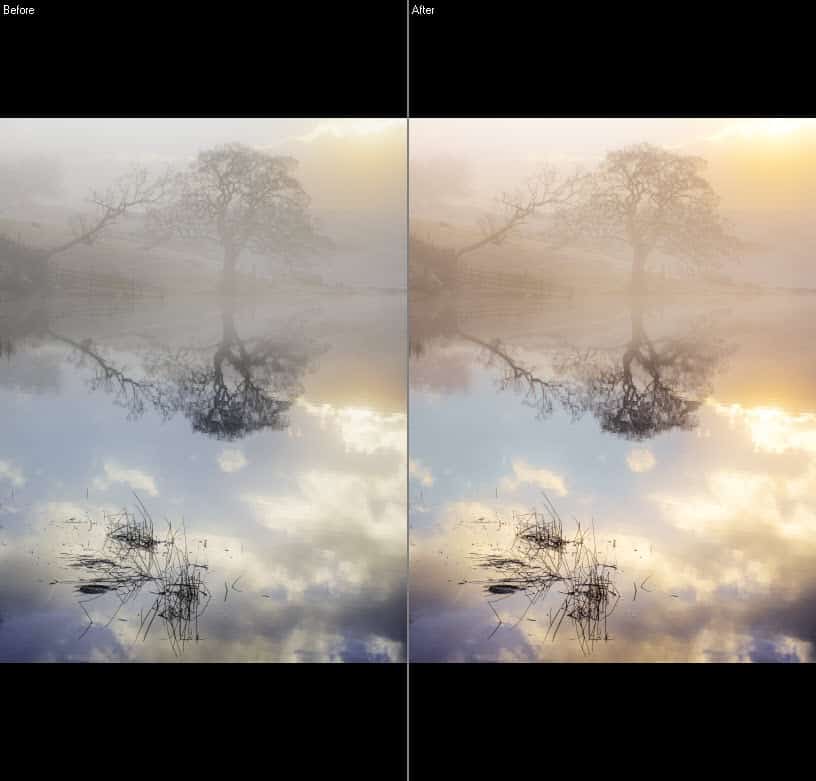 I then saved my adjusted image as a TIFF file and 3D LUT Creator also supports other common formats. It’s pleasing to see that you have control over the quality of the saved image and the colour space. If there are settings you use a lot, you can set them as defaults using the software’s preferences.

Whilst this tutorial focussed on editing an image using 3D LUT Creator, you can also save these adjustments as a LUT file. To create a LUT file select “File | Export” in the File menu. You can then name your LUT file and select the LUT format you want to use. This is important as not all photo editing software supports every LUT format.

Fortunately, 3D LUT Creator supports several LUT formats including “cube”. The cube format is very popular, and you should find a lot of compatibility with photo editors. The software also includes an option to export and install the LUT directly to Photoshop.

How to Create Your Own LUTs Using 3D LUT Creator Summary

The 3D LUT Creator software takes a different approach to many of the popular photo editors. This is no bad thing, but it may take you some time initially to get your head around the features. Do remember though, this isn’t your traditional photo editor. It’s intended for creating LUTs.

What’s possible most surprising is that a LUT created from small adjustments like those described here, can have a dramatic effect when applied to other images. The best way to understand just what’s possible it to experiment with the software.