The High Pass filter in Affinity Photo appears to cause confusion. That’s a shame as it’s a very effective and useful filter to use for sharpening photographs. In this tutorial we’ll examine:

Why Use the High Pass Filter for Sharpening?

When you apply an Affinity Photo filter to an image, you apply it directly to the pixel image. This means you can’t subsequently reopen and adjust the filter settings. All you can do is reduce the layer opacity or start again. In contrast, the Live Filter attaches to the layer, but you can reopen and adjust the settings. You can also disable it as well as change the Opacity and Blending Moe. Given image sharpening with the High Pass filter can be difficult to judge, it’s probably best used as a Live Filter adjustment.

It’s usually best to create a new layer to apply the filter to, even though you’re using a Live Filter. You can do this by selecting “Layer | Merge Visible” from the Affinity Photo menu. This consolidates all the layers in the image into a new layer at the top of the Layer stack. You can see an example below. 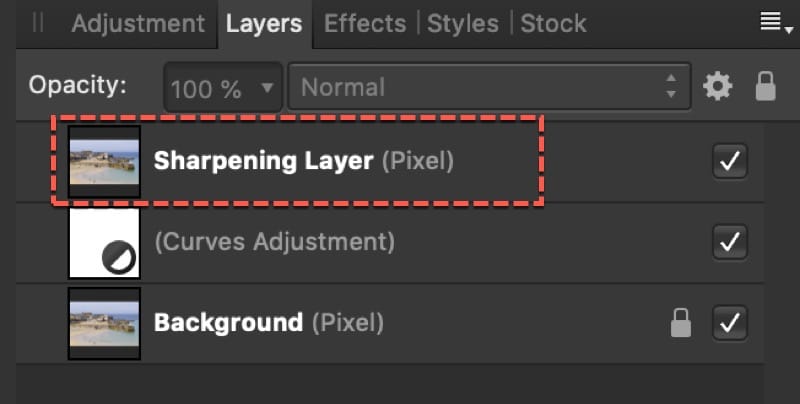 Having created a new sharpening layer, click to select it in the Layers Studio Panel. You can then add the Live Filter by selecting “Layer | New Live Filter Layer | Sharpen | High Pass…”.

This displays the High Pass filter dialog as shown below. You will also see the new Live Filter in the Layers Studio Panel, attached to the “Sharpening Layer”. 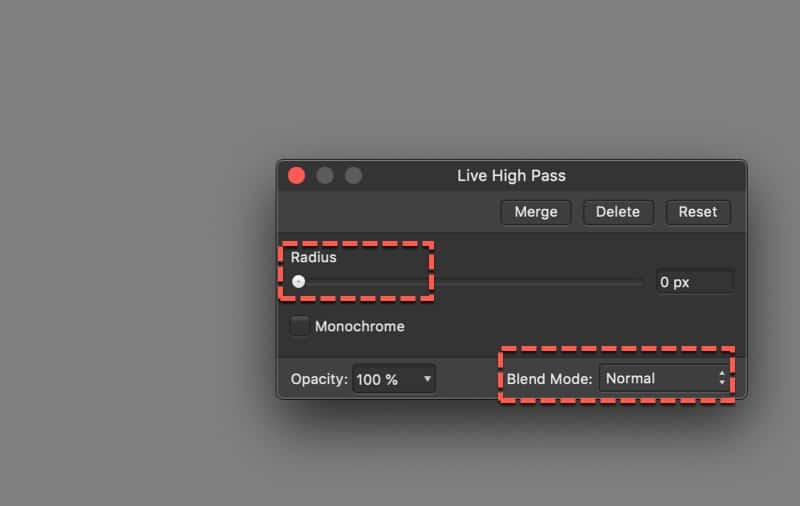 When the High Pass filter dialog’s displayed you will also see the image turn grey. This is perfectly normal but can be confusing at first. Let’s look at how to control this.

The High Pass filter dialog only has two controls you need to use to create the sharpening effect. They are the Radius slider and the Blending Mode.

If you increase the Radius setting, the edges of objects in the image become more obvious. 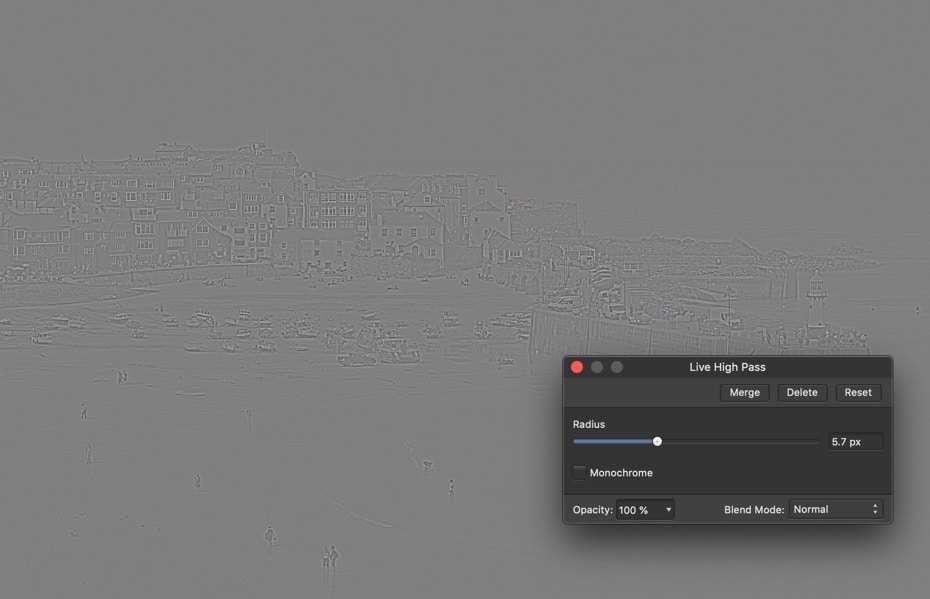 What’s happening is that the High Pass filter is detecting the edges and emphasising these. The higher you make the Radius, the more the edges are emphasised, although the image remains a grey colour.

To create the sharpening effect, all we need to do is change the Blending Mode to be Overlay. When you do this, you’ll see the image appear but this time it will be sharper. What’s happening is that the Overlay Blending Mode enhances the contrast along the edges detected by the High Pass filter.

If you now adjust the Radius setting you’ll see the effect change. At low levels of 1px or less, there isn’t much of a sharpening effect. When you increase the Radius to more than 10px, the effect becomes more like a Clarity adjustment.

When you’re adjusting the Radius it’s a good idea to use the Affinity Photo Navigator Studio Panel to zoom in to 100%. This makes it easier to judge the effect but be sure to try other zoom levels as well.

In the example above we set the Blending Mode to Overlay but there are other contrast-enhancing Blending Modes, you can use. As well as Overlay there is Soft Light, Hard Light, Linear Light, Vivid Light and Pin Light. Each tends to have a slightly different effect but also creates a different sharpening intensity.

It’s well worth experimenting with the different Blending Modes and Radius levels. If you find you like an effect but feel it’s a little too strong, you can reduce the strength of the sharpening by reducing the High Pass filters Opacity.

But what if you want to increase the sharpening effect to a greater level than you can achieve with the Blending Modes? If you find you need to do this, just add another High Pass Live Filter layer to the image.

Here you can see a small section of the image magnified to 100%. The image on the left only has Capture Sharpening applied in the Affinity Photo Develop Persona, whilst the image on the right has additional sharpening using the High Pass filter.

The Affinity Photo High Pass sharpening technique offers significant power and control. It may not be the most intuitive method of sharpening an image but once understood, it can be particularly effective. It does require some initial experimentation, but you will quickly learn the intricacies.