Happy New Year and welcome to the Lenscraft in Focus January 2020 newsletter. Here’s to a great year of photography in 2020. This month’s newsletter isn’t a long one. I’m writing it over the Christmas break, and I’ve promised my family that I won’t do my usual trick of working throughout.

I’ll start by sharing this image that I captured just before the holidays. This is Curbar Edge in the Peak District just before the sun came up and which often gives the best light for landscape photography. I hope you like this image as I try to make an important point with it in the next article. 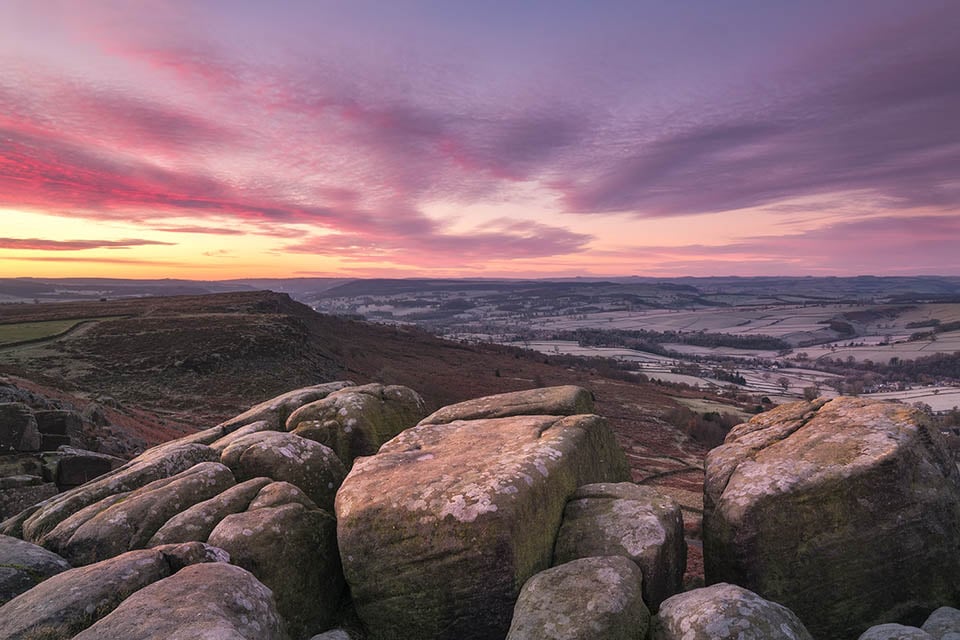 Why I Say No and What You Can Learn

You may not realise but I receive a lot of email every day and there’s one request that regularly comes up. I frequently receive photos from photographers asking me to edit the image for them. Usually these are from photographers who are curious about the difference photo editing makes to an image.

Unfortunately, I have to say no to all such requests. You might not realise but it takes me 1-2 hours to edit an image well. If I did this for every request, I wouldn’t have time to do anything else only a handful of people would ever benefit. That isn’t something that I want; I like to help as many people as possible which is why I decided to write this article.

Back then to the question does good photo editing make a difference? The answer is most definitely YES, but let’s explore this more by looking at an unedited RAW file and its histogram. 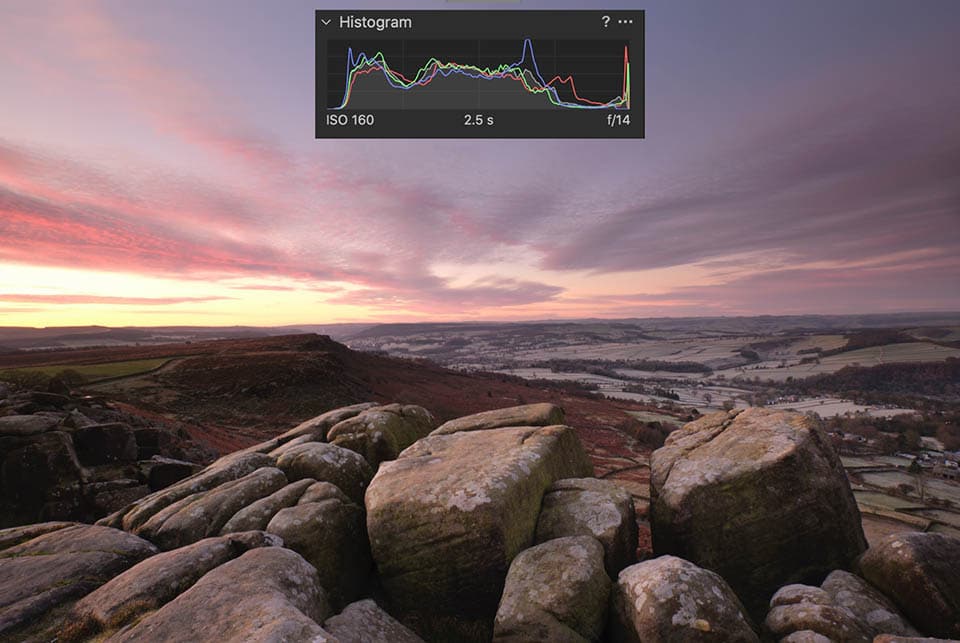 The histogram for this unadjusted RAW file image shows some clipping in the highlights for one of the colour channels but none in the shadows. The problem we do have is that image has a lot of information compressed into the brightest areas. This makes the colour in the sky appear weak and poorly defined because the computer monitor can’t separate the tones. The fix for this isn’t to increase the saturation but to reduce the brightness of the highlights.

The image also has a lot of tones spread across the histogram and apart from a lot of deep shadows, doesn’t appear too bad. This is a good starting exposure to edit from and it won’t take much adjustment to produce the finished image which you can see in the newsletter introduction. When editing it’s very important to have a good starting position to work from.

The reason I was able to capture a good exposure for this image is that I used a three stop Neutral Density Graduated filter on the sky. This reduced the dynamic range of the scene to something the camera could handle. If I hadn’t used the filter, the sky would have appeared much brighter and the rocks in the foreground darker. The histogram would probably show clipping at both ends with little information in the midtones. The midtones are very important and usually produce the greatest visual impact.

Correcting a RAW file that has poor exposure is possible to some degree. But when you look closely at the results  the quality of these images is poor. It’s therefore often necessary to capture multiple images at different exposures and use exposure blending techniques.

The reason I want to stress these points is that a lot of the images I receive have a problem with the dynamic range. The photographer either didn’t use an ND Grad filter, or the filter was far too weak. Trying to produce a good edit from such an image is an uphill challenge. The results may look OK for an initial glance, but they won’t stand closer inspection. My message is, either use quality filters or shoot multiple exposures and learn how to do exposure blending in editing.

The next problem I see a lot are common mistakes. A good example is the skewed horizon where the image is obviously leaning to one side a lot. Whilst you can correct this in post capture processing, it’s better to avoid it in the first place. Use the level on your camera to check the horizon or get a spirit level for the camera. Another example is having unwanted objects around the edge of the frame or even into the centre. Don’t be lazy and think you can ignore this and fix it later. It’s much better to be careful with your composition.

And whilst I’m talking about composition, there’s another problem that I see a lot. Many images that I’m sent lack a point of interest.  In many cases it leaves you wondering why the photographer shot the image. A typical example is where there’s a nice sunset sky but there’s a black mass of trees, bushes and houses in the foreground that ruin the scene. Another example is a tiny looking range of mountains in the distance with an empty foreground. You can’t fix these problems by editing the image. It’s essential to capture a good composition with the camera.

The final point to make is that I often see images with poor editing. The saturation and contrast are already at unnatural levels. The shadows are completely open so that you can see every detail, and the image has been sharpened to within an inch of its life. The email then says something along the lines of this being the original image before any editing. As I mentioned at the start, this isn’t a good starting position for any editing, and it isn’t possible to reverse the damage.

Actually, I do have one more point to add and it’s the reason why I shouldn’t be editing your photos. I didn’t shoot the original image and I don’t have the vision of the finished image. Yes, I can make an image look better, but this will never match a true artistic vision. That’s the vision that comes only from the photographer. Only they know what was in their mind that caused them to take the shot. Artistic vision is one of the most powerful tools in photography and why you must edit your own photos.

There’s been a slight change to my schedule for camera club presentations. My next presentation will still be at the 85 Photography Group in Hazel Grove but is now on the 11th February, rather than in March. I’m delivering my popular presentation “Lessons for Landscape Photographers”.

The club is very friendly and welcomes guest visitors. If you would like to attend, please contact the club via their website. There’s an email contact link on the “How to Join” page. If you do come along, please introduce yourself at the interval as I really enjoy meeting Lenscraft readers.

From Around the Web

Snippets of news from around the internet. 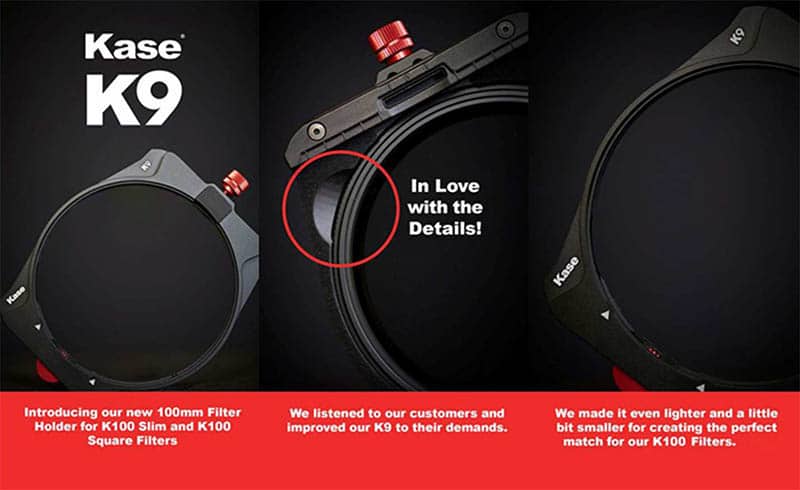 The people over at Kase filters have been at it again, launching a new K9 filter holder. No, it’s not for dog lovers but is an improved version of the excellent K8 holder. This latest version for 100mm filters addresses feedback from some Sony 16-35mm F2.8 GM and Nikon 14-35 users that they were seeing some vignetting at the extreme wide end of the focal range. The new holder is also lighter, not that the K8 holder was heavy by any means, slightly bigger and features a few usability improvements. The new K9 holder with magnetic polariser is available to purchase separately and is now included in all Kase UK kits.

I’ve now been using Kase filters for a little over 2 years and my filters continue to perform brilliantly. I recently needed to use a resin filter from another popular manufacturer and found that I really struggled with lens flare. I hadn’t realised how much freedom the Kase filters had given me until I lost it. I vowed never to forget my filters again.

Photographers You May Not Know – Erin Babnik

I suspect quite a few people reading this newsletter are already be aware of Erin. I say this with confidence because the interviews page on her website is amazing. She’s recognised as one of the best wilderness photographers in the world and if you haven’t heard her name before you must see her work.

I must admit that I only came across Erin a few months back when I saw the image above. The composition is excellent and the subject very unusual and beautiful.  But what really caught my attention was the colour palette in the image. Erin clearly has an amazing understanding of colour that you see this repeated throughout her work.

Whilst I would urge you to visit her website to enjoy the portfolio of images, I did experience problems using a Firefox browser (other browsers seem fine). If you find you have problems, you can also view some of her images on her Instagram page (https://www.instagram.com/erinbabnik/). 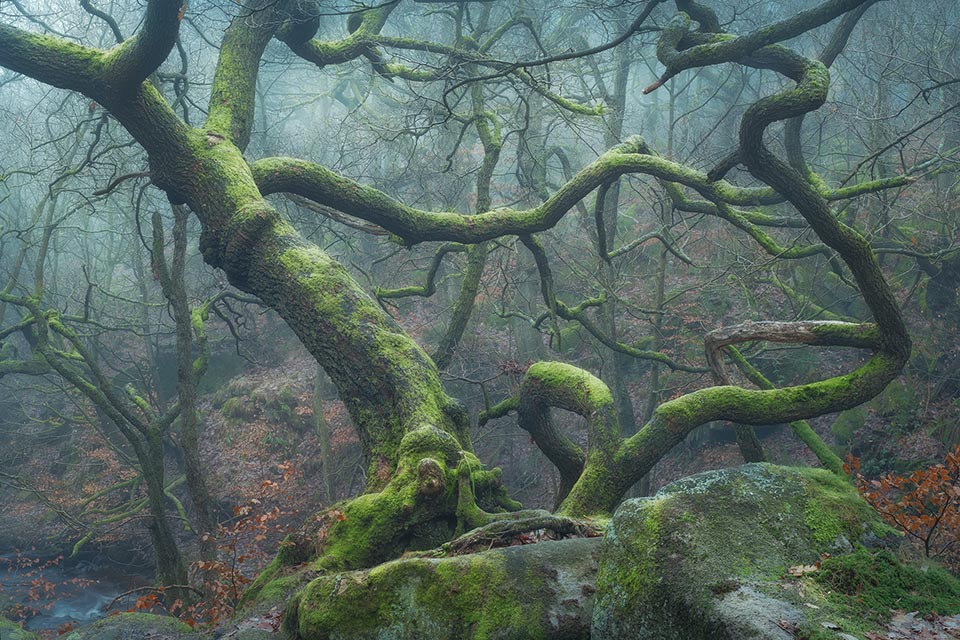 I’ve previously mentioned that I’m working on a new landscape and can now share a little more.

I’ve received lots of requests to write a  Landscape Photography book over the past few years, but always resisted because I felt I couldn’t add much. Now I believe I’ve developed something different and that can really help a lot of people. What makes this latest book unique is that it looks at landscape photography through the lens of a professional photographer.

Needing to earn a living from your photography requires you take a different approach to the craft. You can’t just turn up at locations and hope to capture a great shot; if you did that you would soon be out of business. Instead you must adopt a planned approach to be sure you’re in the right locations at the right time to capture the best shots. You also can’t keep spending money on the latest cameras that won’t help you take great shots. Instead, you invest in more “mundane equipment” that does improve your results.

This book is about how the professional’s approach to landscape photography differs and how it will benefit you. It’s much easier than you might think, and it will help you produce better photography.

I’m working to finalise the book in January but I’m also not going to rush. I want this to be the most practical and transformational landscape photography book available for photographers at all levels. When the book’s ready I will send out an announcement and hopefully include details in the next newsletter.